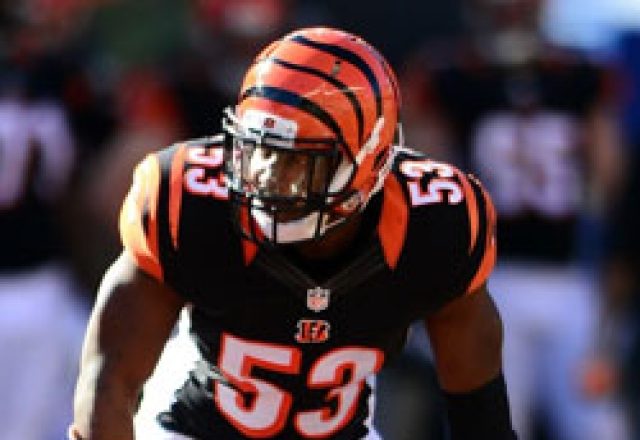 The Patriots addressed their depth at linebacker and on special teams on Tuesday morning when it was announced that they traded a 7th round draft pick for LB Marquis Flowers from the Cincinnati Bengals.

Flowers was drafted by the Bengals in the 6th Round (212th Overall) of the 2014 NFL Draft out of Arizona. The 6’3, 245-pound Flowers is an athletic player who is more comfortable outside on the edge than he is inside. He can cover and has the range to run with more athletic players. He’s been used as strictly a special teams’ player for the Bengals, playing only two snaps on defense last year. With their Special Teams’ standouts having been hurt this summer, including Harvey Langi, Shea McClellin, and Geneo Grissom, Flowers will step right into a key role right away. That was apparent in Tuesday’s practice as he stepped into the starting ST’s unit.

Why is this move significant? Well, that depends on your perspective. With many of the special team’s players banged up and facing the Kansas City Chiefs with the dangerous return game with Tyreek Hill, the coaching staff will want their most athletic players on the field. But this may go even deeper than that.

This may be a signal that the Patriots are planning on cutting their ties to two of their more dynamic special teams’ players in Brandon Bolden and Jordan Richards. Bolden has been a standout STs performer for years but is just in a position that is log jammed with talent.

Richards, on the other hand, has been a disappointment. They’ve tried him at different positions on the defense and he hasn’t been able to make a positive impression. This could be a signal that one or the other, perhaps both may be on the block.

But for Flowers, he’s young, athletic and can step into a core special teams’ role immediately. And he’s able to step up and play some defense as well.

While many on social media were thinking that Flowers is a camp body for the 4th preseason game, I disagree. I think he’s pretty much a lock. They need some athleticism on their STs units with KC coming into town. And he’ll give them that and be able to play some defense as well in the team’s sub-packages. The Patriots have made a trade, albeit a minor one but one which will have some impact, at least in the first few weeks of the season.

By: Robert Alvarez
Check out the Patriots mini-documentary highlighting Richard Seymour's football journey to becoming a Hall of Fame player.
9 mins ago

By: Ian Logue
Patriots news for Monday 8/8 along with some additional team notes.
3 hours ago