The Patriots signed former defensive lineman Vince Wilfork to a one-day contract so that he could retire as a Patriot. Or as Robert Kraft put it in his remarks, “A Patriot for Life.” The respect he has around these parts is off the charts, both on and off the field.

Wilfork and his wife Bianca (AKA Mrs 75) were great representatives not only for the team but for the region with their charitable endeavors and the interaction with the fans. The most emotional part of his retirement ceremony was his mention of his parents, who both passed away before they could see him live his dream of playing in the NFL. We hope to see lots of them around here in the future. Red and gold jackets await in the future…we’re calling it early.

Goodell Shows Up for the Preseason Opener in a Pre-emptive Strike:
How ‘bout dem apples? NFL Commissioner Roger Goodell just took the drama out of his opening night appearance in Gillette Stadium by showing up at the Jaguars preseason game. The Commish then posed for pictures with a couple of surprised Patriots fans who probably seemed as shocked to see him as the rest of us that he was there. 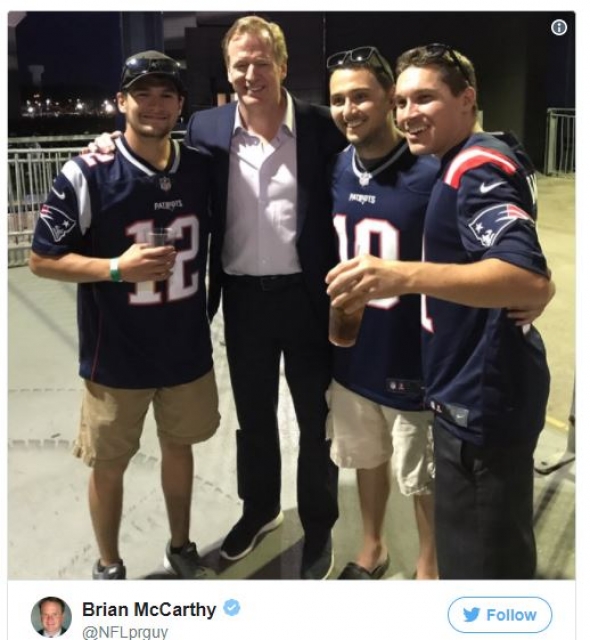 It kinds of renders the entire clown-nose shirt thing moot. However, I’m sure that will still go on as planned but it seems like a day late and a dollar short now. Smart move by Goodell.

The backlash against the three guys who posed with Goodell has gone, predictably over the top with the reaction of many on social media. These guys were surprised as they were walking to their seats by an NFL staffer who asked them to take a picture. Less than 30 seconds later it is all over social media, posted by the league.

They were no doubt lubing up in the pregrame tailgate, got surprised and used as pawns by a slick NFL staffer in this deal and were taken advantage of, Case closed… We’re on to Houston.

Jerry Jones Furious…Over “no evidence” and Suspension of Elliott:
Cowboys owner Jerry Jones is fighting mad and he isn’t going to take it anymore…or is he? When the ongoing fiasco with the investigation of Ezekiel Elliott a while back, there were serious questions about whether the alleged abuse ever happened. Jones, the Cowboys owner rushed to his RB’s defense and said there was “no evidence” that anything took place.

Ah, but the workings of the good folks at Park Avenue look at things differently. Evidence, schmevidence. The NFL slapped a six-game ban on Elliott for allegedly abusing his girlfriend. The fact that the same league only suspended Giants kicker Josh Brown for one game last year, when a mountain of evidence, including NFL security personnel who had to separate Brown from his wife at the Pro Bowl speaks volumes about the consistency of their punishments.

Jones won’t get any sympathy in these parts. He was practically giddy about the suspension of Tom Brady and spoke highly about the job Goodell was doing and he supported his decision-making in these matters…OOPS.

Patriots – Texans Joint Practice/Preseason Games to Have Different Vibe:
In a strange scheduling of events this summer, the Patriots and Texans meet in the second preseason game and then will lock horns for real in the third week of the NFL season on September 24 at Gillette Stadium.

As a result, the workouts and the preseason will look a bit different when the two teams meet this week. Expect both teams to be really cagey and play their cards close to their vest as they will have Week 3 in mind.

Defensive End Depth Addressed As Pats SIgn Keionta Davis:
The injury sustained by Deatrich Wise when he got kicked in the head on Thursday night against the Jaguars highlighted the need for some depth at defensive end. Wise suffered a concussion and is expected to miss at least a week. Kony Ealy has struggled somewhat in the early going, so the team went out and signed DE Keionta Davis, the UDFA from Chattanooga. In a corresponding move, the team released DB Dwayne Thomas.

Davis was an All-America defensive end who had 31 sacks in college, including 10.5 in 2016. He was thought to be a mid-to-late round draft selection before he was found to have a bulging disc in his neck that he never knew about or affected his play and went undrafted. We even had him in one of our Mock Drafts this spring.

The 6’3, 271-pound Davis, if healthy, he has good initial explosion, has the ability to shoot the gap inside and influence the play and has quick, violent hands that can free him from the offensive lineman’s grasp. He is still a bit raw but has the size and strength to play on the edge in a 4-3 scheme.

Hollister and Carr Make the Most of Their Opportunities Against Jax:
A couple of the bright spots for the Patriots this week against the Jaguars was the play of both WR Austin Carr and TE Jacob Hollister who took advantage of the starters resting to put forth some very solid efforts in their first NFL action.

Carr led the Big 10 in receiving last season but went undrafted. He’s had some very good moments during the early going of training camp, showing some outstanding hands and good quickness off the line.

We got the chance to interview Hollister in a one-on-one opportunity during the first week of training camp and you can take another look at that here: He’s more of a move tight end than a traditional inline blocker but he has good speed to attack the seams, has good hands and has been a productive player in college.

Both have uphill climbs to make the 53-man roster, the WR position is very deep and there are two tight ends already locked into the roster. Will Hollister have enough to unseat the others for the #3 TE spot? We’ll see but neither did anything to hurt their chances with solid performances on Thursday night.

The sequence of a Great Catch:
We normally look at a big play during practice or a game and watch the video of a player making a great catch or a run. On Monday, Chris Hogan had arguably the play of the day with a great catch down the sideline on a perfectly thrown ball by Tom Brady. Instead of video we had our sequence of still photos that show how Hogan gets just the slightest of separation and then leaps up to come down with the ball.

Just something a little different this week. Check them out. 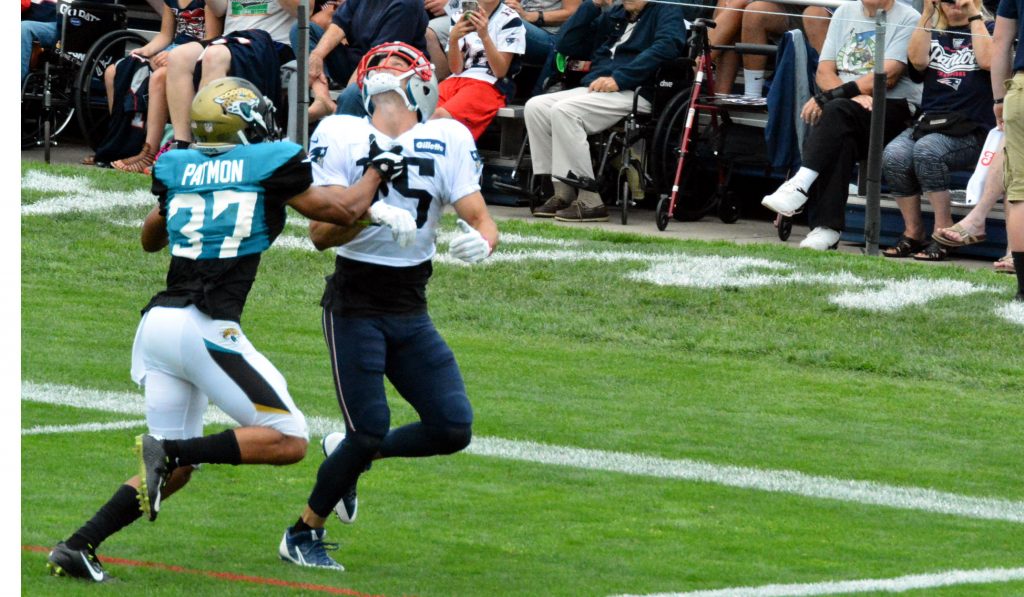 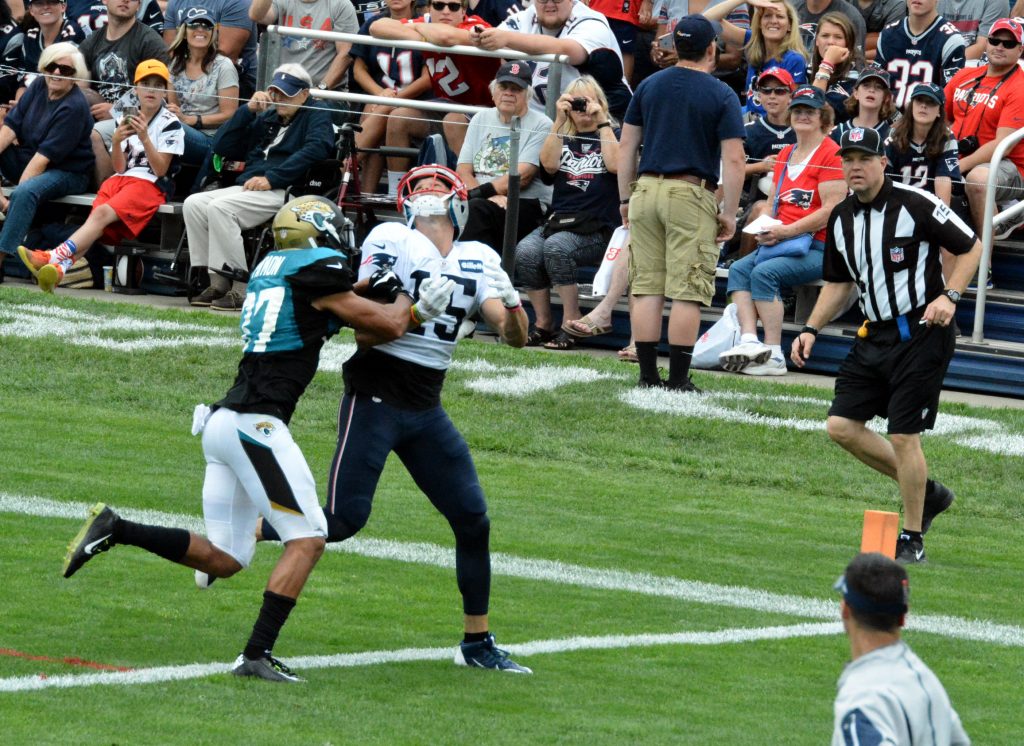 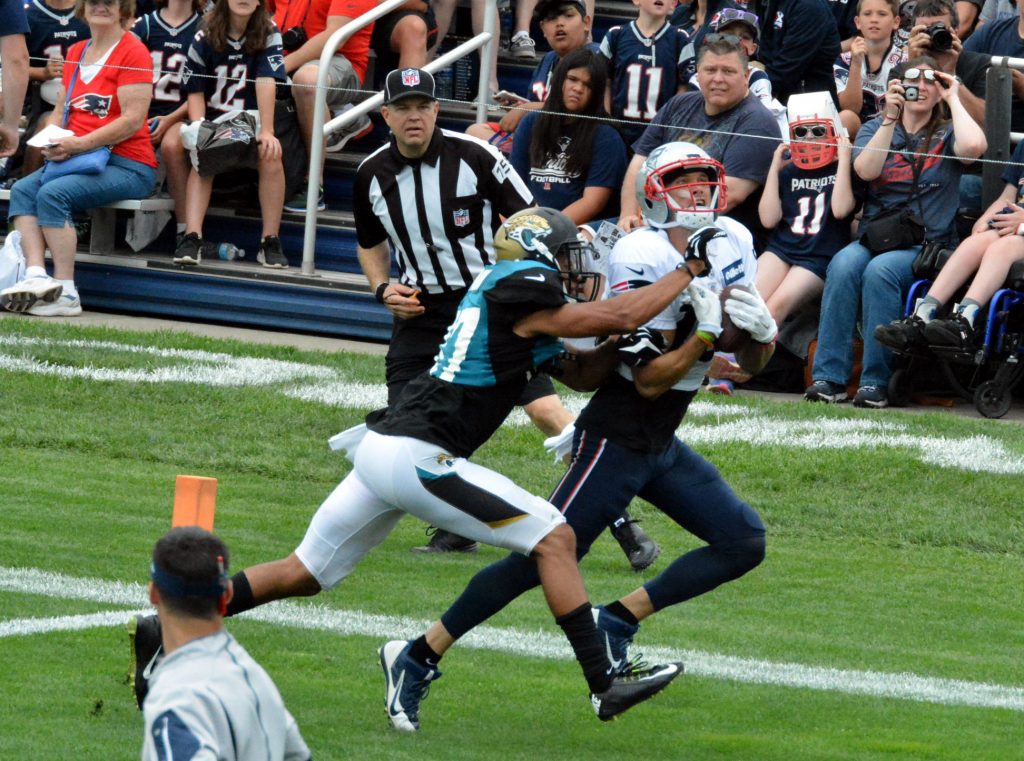 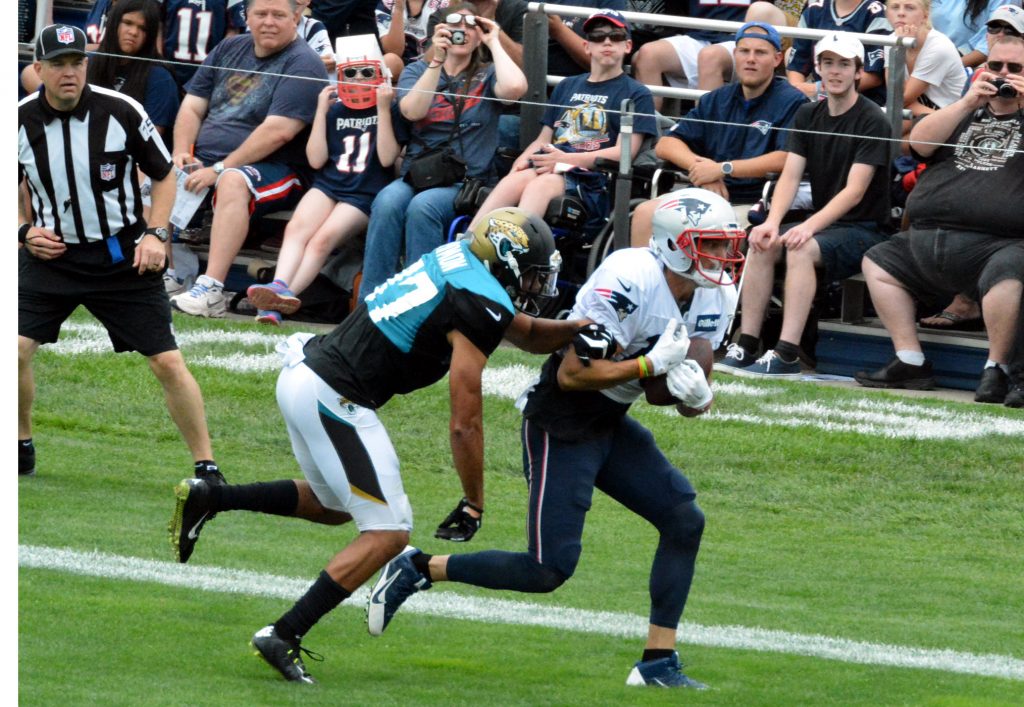 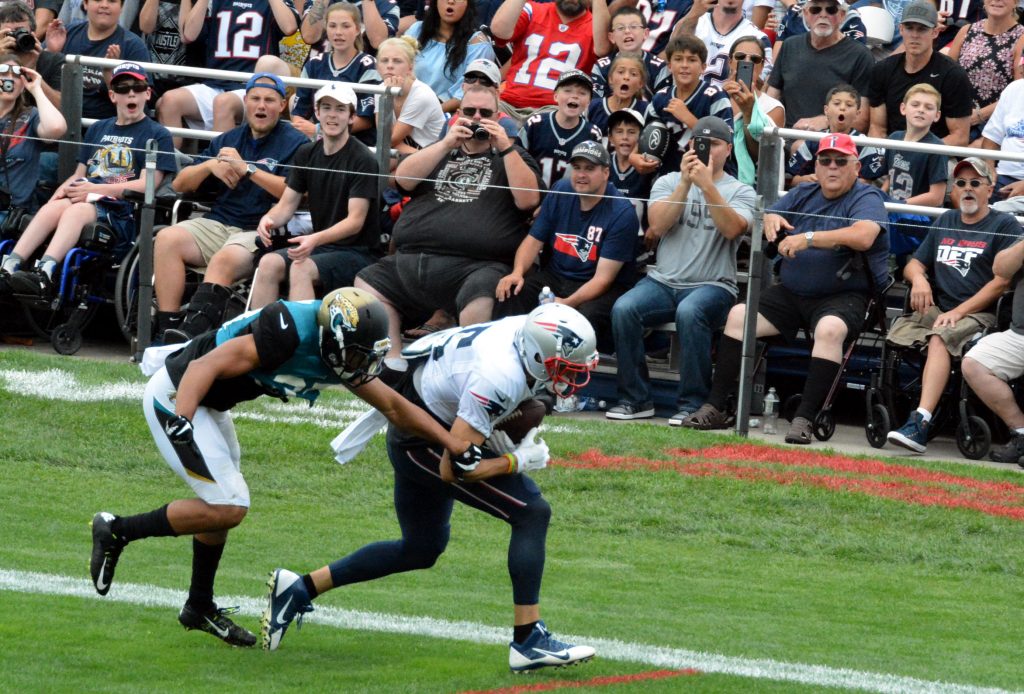 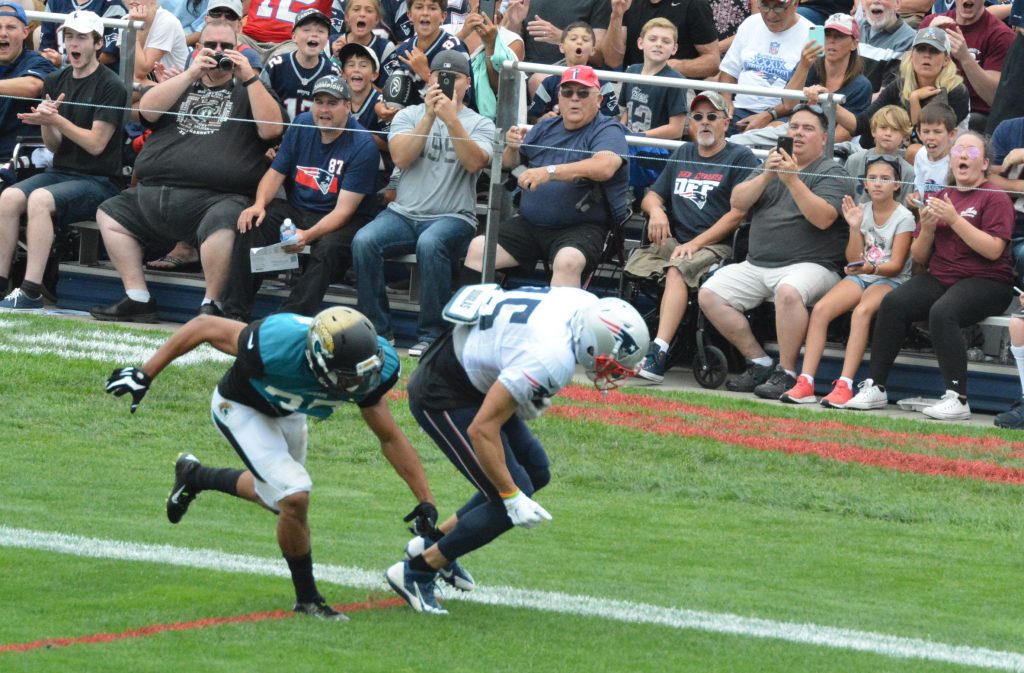 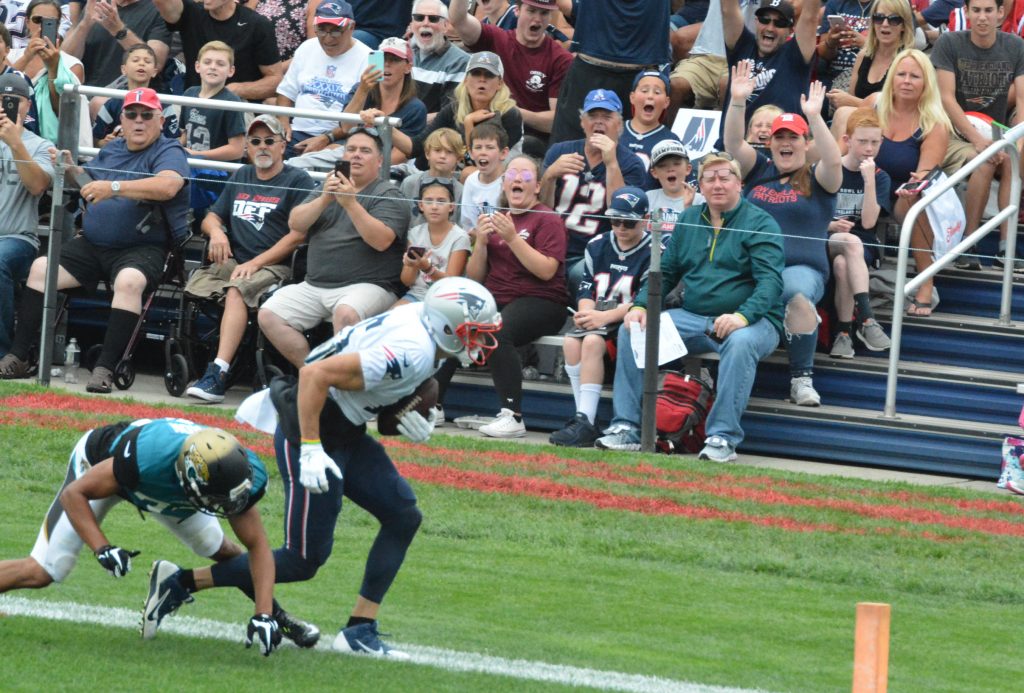 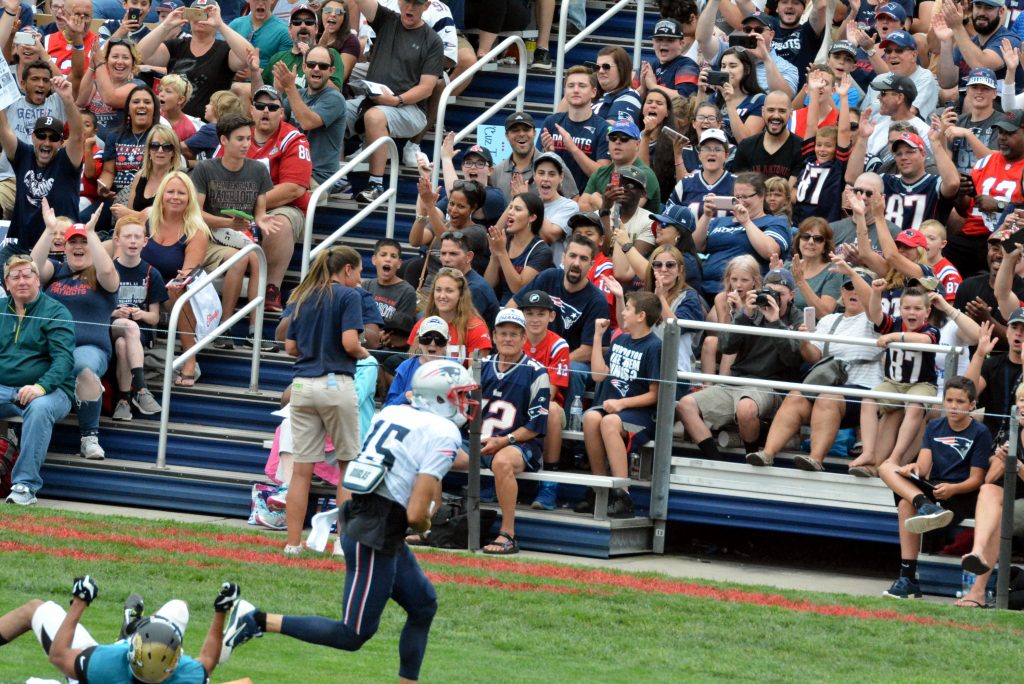 Bills Trade Two of the Best Players Away:

The Buffalo Bills in a stunning move traded star WR Sammy Watkins and CB Ronald Darby in a three team deal with the Philadelphia Eagles and the Los Angeles Rams.

While these moves may potentially weaken the Bills in the short term, they look to be in better shape down the road, for 2018 and beyond. Matthews has made his living operating out of the slot the past three years and will automatically become the #1 target for QB Tyrod Taylor in the Bills offense.

Tannehill to Cutler Isn’t a Step Up for the Dolphins:
“Just when I thought I was out…they pulled me back in.” Michael Corleone GFIII The Miami Dolphins signed Jay Cutler after QB Ryan Tannehill was injured in a non-contact injury during training camp, in what will probably be an end to his time in Miami. Tannehill hasn’t become the QB that the Dolphins hoped he would, but after surrounding him with a lot of talent this season, the hopes were that he’d make a jump in play this year.

Tannehill has weathered a lot in his time, different offenses and offensive coordinators every year, a sieve of an offensive line at times, and even the barbs of social media from the wife of a teammate. We never thought he’d be the franchise QB there, but in our humble opinion, he’s a better deal than Cutler.

As soon as this deal was made, many in social media were lauding this move as Miami “making a step up” at the QB position. Over who? Matt Moore the backup? I could accept that, but Cutler isn’t a better QB than Tannehill in the Dolphin’s system. I’m not buying that…at all. If so, Miami had plenty of opportunities to make that move back in March and give Cutler (who played for Adam Gase) the benefit of an entire offseason program.

Cutler is the perennial tease. Everywhere he’s gone he’s hailed as a savior upon arriving and shown the door down the road with no one sad to see him go. Miami isn’t going to end any differently. Is he better than the scrappy Matt Moore? Maybe, and then only marginally so. Caveat emptor Miami, (Let the buyer beware). “ Come on, Rook. Show us that million-dollar arm, ’cause I got a good idea about that five-cent head of yours.” Crash Davis in Bull Durham.

Decker Returns to the Jets Stadium, in a Titans uniform:

The New York Jets released Eric Decker this spring in the Great Purge that hasn’t been seen since the days of Joseph Stalin and the USSR in the 1930s. The Jets cleaned house and let go a plethora of stars for the team. Decker who went thru OTAs with the team was coming off of an injury plagued season in 2016 that eventually landed him on IR requiring shoulder and back surgeries.

He was very productive in 2015 with 80 catches, for 1027 yards and 12 touchdowns as the #2 WR to Brandon Marshall, who was also released. Jace Amaro, the Jets 2nd round bust TE who was released in 2016 will also suit up for Tennessee.

Did the Jets cut Decker too soon? Looking at their current crop of WRs especially after the injury to Quincy Enunwa, it appears so. So we’ll be watching Decker this summer and into the regular season. If he’s healthy, he’ll help resurgent Titans team. And the Jets? They’ll be setting their sights on the #1 pick in the NFL Draft for 2018.