5 years ago at 6:58 am ET
Follow @SteveB7SFG
Posted Under: Patriots Commentary

The Patriots concluded their second day of mandatory minicamp on Wednesday under bright sunny skies after Tuesday’s session seemed more like late October weather with rain and temperatures in the 40s.

A total of 88 players took part with DL Lawrence Guy and backup OL Andrew Jelks being the only players not on the field. Brandon King was on the field however he didn’t appear to be working out.

Dont’a Hightower worked out on the exercise bike at the beginning/stretching phase of the workout and he and Malcolm Mitchell retreated to the lower fields with training personnel. Jonathan Freeny wore a red non-contact jersey and is still recovering from shoulder surgery that landed him on IR.

Russ Goldman and I were at Wednesday’s session and this was our observations from the practice. And remember, it is really early and there aren’t any pads on until training camp.

Cooks appears even faster than we remember:
Last summer during the joint practices with the Saints, Brandin Cooks stood out with his speed when working against the Patriots corners, specifically Malcolm Butler. Fast forward a year and if anything, he’s even more impressive. 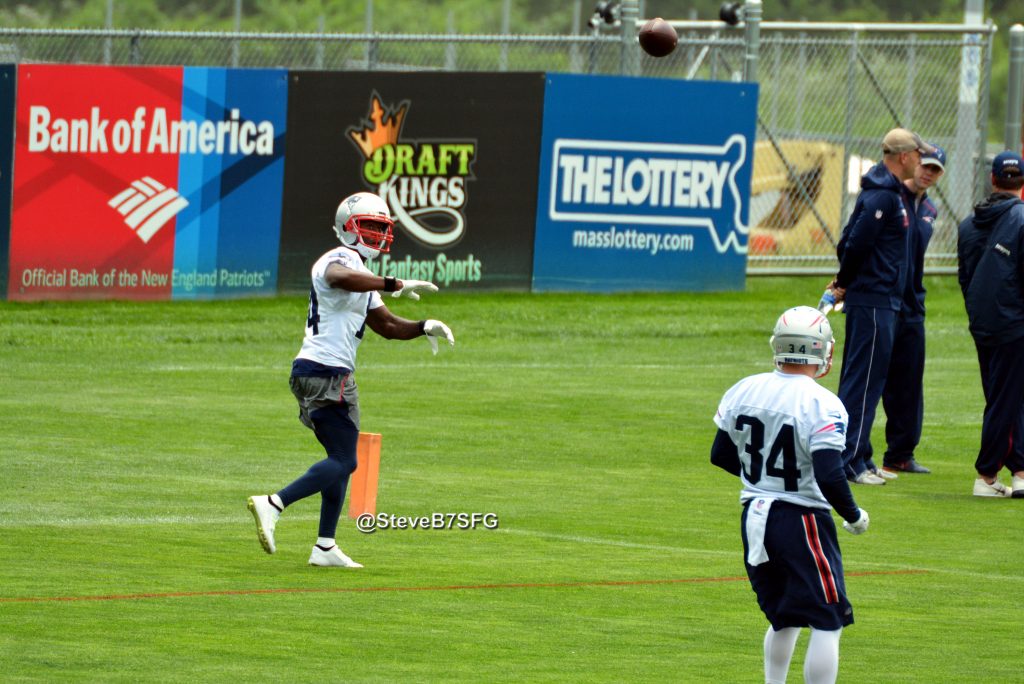 Brandin Cooks looks to be a very intriguing option for the offense in 2017. (SBalestrieri photo)

Cooks’ speed was on full display on Wednesday, he connected on a post route from Tom Brady where he literally left Jordan Richards and Devin McCourty in his dust. Richards has been playing some deep safety early in minicamp as Duron Harmon has been limited and we know that isn’t his strength but it is clear that if defenders can’t get a jam on Cooks at the line, he has the speed to create separation and dare we say it…. stretch the field.

He showed during both 7-on-7 and 11-on-11 work, that whenever he wasn’t disrupted he was getting open. Cooks is obviously putting the work in to build that early rapport and trust factor with Brady, something that can’t be overstated.

Brissett had a Rough Outing:
Look, we get it, it is one practice and an early one at that. But this spring we made a mental note to watch Brissett and look for that big second season jump in play. And this wasn’t it. After reading about his struggles on Day 1, he’ll have to put some extra work in before training camp begins. 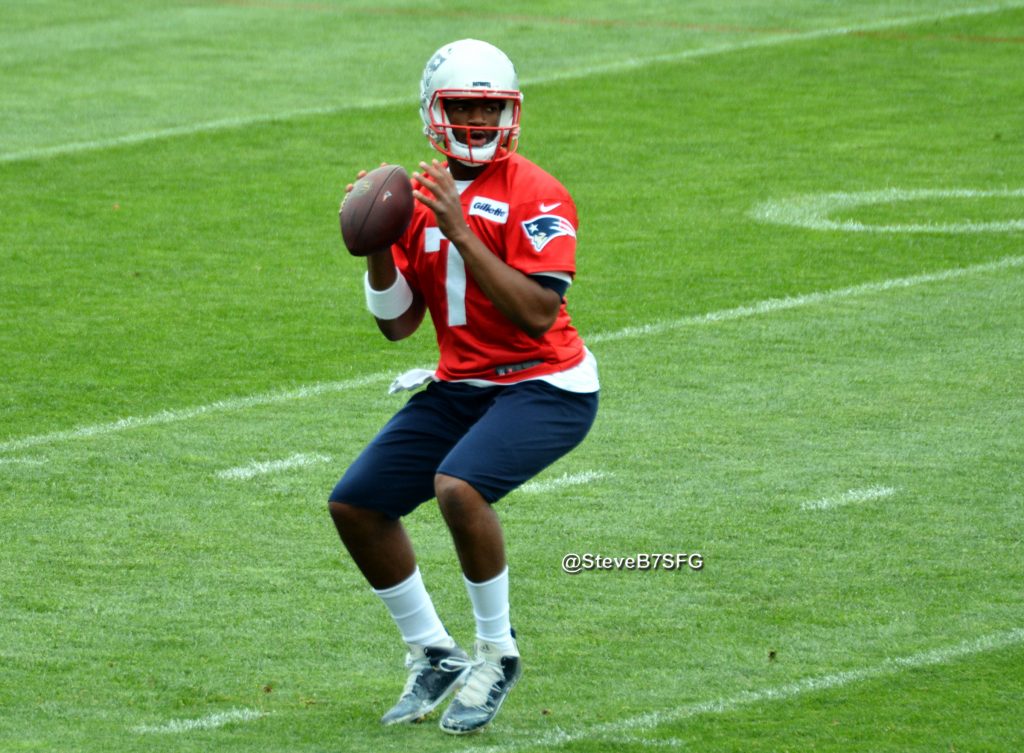 He seemed to process things late, holding onto the ball for far too long. His accuracy was off as well. He missed many throws he needs to make if he’s pressed into service again. During 7-on-7s RB D.J. Foster had a good step on his man down the center of the field on a post route and Brissett badly overthrew him. That’s a throw that Brady makes consistently.

Nothing to be overly alarmed at unless it becomes a trend. As Russ pointed out, some of his timing issues could stem from the fact that he was working with an entirely new cast of characters and he hasn’t had the opportunity to build any chemistry with them yet.

On the flip side, Brady not surprisingly looks to be in mid-season form. His throwing motion is always perfect, something he works on. A staffer was filming all three QBs as they went thru their throwing motion. Fundamentals are always stressed at this time of year. Garoppolo looked sharp after reading of his struggles on Day 1.

Julian Edelman and Chris Hogan look to pick up right where they left off last season. Each looked sharp in their route running and each made a couple of nice catches in team drills. Hogan with a back-shoulder throw and catch near the sideline over Butler and Edelman with a grab down the middle. 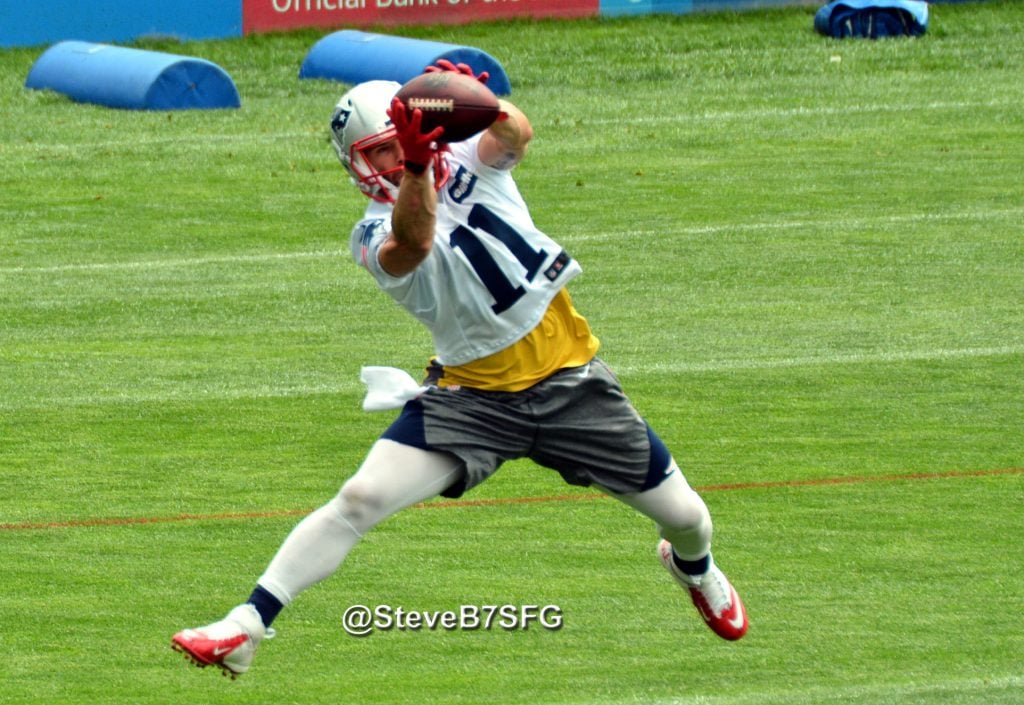 Julian Edelman had a typically strong day at minicamp, making a few nice catches, as this one over the middle. (SBalestrieri photo)

Newcomer Stephon Gilmore definitely looks the part of a tall, physical defender. He looked impressive at times but was beaten by Edelman badly, going for a fake and left grabbing air. Not surprising since the jamming is very limited at this time of year. He took a back seat to Eric Rowe for many of the drills today as Rowe got some work with the first unit.

Gronk beat Pat Chung for a touchdown in team drills on a nice pass from Brady. The big man is looking healthy and was all business on the field Wednesday. Chung has the unenviable position of usually covering him in practice. And when he’s on like that, no one can stop him one on one.

Kyle Van Noy picked off Garappolo during 11-on-11s and Kony Ealy had a pass breakup during team drills, dropping into the flat to cover the area for check downs, something that Chris Long did frequently last season.

Rex Burkhead looked to be a nice target in the passing game as he was the recipient of about a half dozen passes during full team drills.

Watching Deatrich Wise had a strange gait in his running and we originally thought he was hobbled. He even had it walking, he wears a bulky knee brace and first thoughts were that he tweaked something. But after speaking with others there, it is a natural gait for him.

UDFA David Jones turned a few heads with some nice coverage ability. He’s a big safety who is listed at 6’3, 210 pounds from Richmond. He’ll be a guy to monitor in future workouts in training camp.

Cody Hollister is a big target (6’4, 209) and had a pretty good day at catching the ball. He was able to generate some separation and used his body well to shield the defenders away.

Good news for Cyrus Jones, he was clean fielding all his kicks on Wednesday. That is encouraging for the rookie who struggled all of last season. And it all started with minicamp struggles in the wind a year ago.

The team gets back for their final minicamp practice on Thursday.

By: Steve Balestrieri
“I think they’re a 12-win team,” Ninkovich said on Greg Hill’s morning show. “Listen, six months ago I thought they were a nine-win team.
7 hours ago