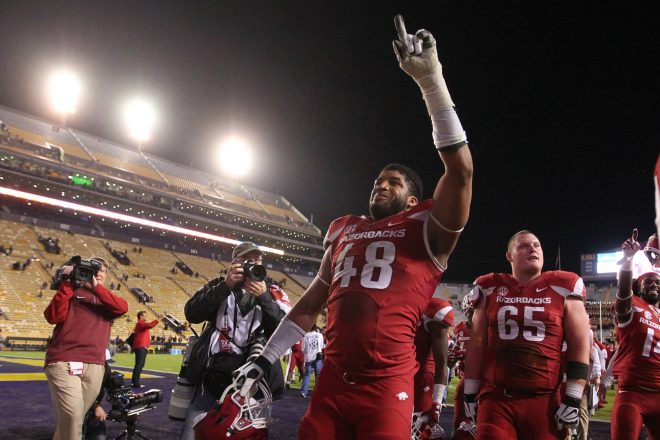 We’re on to Tuesday, and here’s a quick look at today’s top stories.

Rivers Has Local Ties – Much was made of the fact the Patriots took Derek Rivers out of a small school like Youngstown (Ohio) State University in the third-round this past weekend, but looking closer, the defensive end also is a native New Englander with local ties.

He was actually born in Augusta, Maine, although he was raised in North Carolina.  But this weekend his mom, Mary Leinonen, sat with her son and their family, many of whom still live in New England, while they held a draft party in South Carolina.  According to the Kennebec Sentinal, as Rivers finished without having been drafted in the second round, he apparently began getting nervous.

However, it wasn’t long before the phone eventually rang and when his mom found out where he was headed, she was excited.

“He whispered to me, ‘Patriots,’ and I did a little jig,” she told the newspaper.

But for the next few minutes, they reportedly managed to hold it together in front of their family, who was unaware of the call and got to experience the jubilation of his selection as his name came across the television.

“I didn’t really care what team he went to. He didn’t care, either, he just wanted the chance,” Leinonen said. “The Patriots was a nice surprise. I went to a (Patriots) game when I was 7 and Steve Grogan was the quarterback.”

Now that Rivers has realized his dream, hopefully the next trip to Foxboro will be even more memorable for Leinonen.

For now, Rivers will take his next step this weekend when mini-camp begins.

Belichick Got Right to the Point With Wise Jr. – Watching the video on Patriots.com of what went on when the Patriots made the selection of Deatrich Wise Jr. in round four over the weekend showed that Bill Belichick doesn’t mince words and gets right to the point when it comes to telling a player they’re about to become a Patriot.

When it came to selecting Wise Jr., it was Berj Najarian, who is listed as director of football/head coach administration on his Linkedin page, who was the one who made the initial call to get Wise Jr. on the phone.  From there it was Belichick, looking relaxed while dressed in khaki shorts and a blue buttoned down short-sleeved shirt, who stood up and walked across the room with a focused look on his face to take the phone from Najarian to speak to the rookie.

There was a quick greeting by Belichick after Najarian handed him the phone, and from there, the Patriots head coach delivered the news.

“We’re about ready to make you a Patriot here,” said Belichick.  “Houston, they’re going to pick, then we’re going to select you.  So, congratulations.”

On the other end, Wise Jr. said the whole experience was definitely one he won’t forget.

“It was exciting,” said Wise Jr.  “Once I got that phone call it got real quiet, and then once my name went across the screen my family, my girlfriend, my friends around me just jumped for joy. It was a very joyful moment.”

Should Wise Jr. go on to have a terrific career in the NFL, it’s funny how that moment was the opening line in what the Arkansas standout is likely hoping will be a book with many chapters.  With rookie mini camp looming and OTAs not far behind, he’ll be getting started with that next step soon enough. 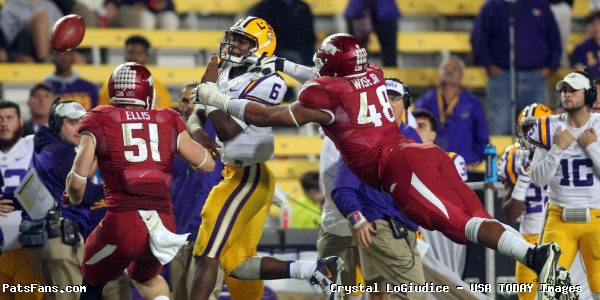 Wise Jr. seems to have the right attitude and should fit in well.

Wise Jr. Fit the Mold in Arkansas – Another note on Wise Jr. that was pretty interesting.  According to SECCountry.com, it’s worth noting that Wise joined Jeremy Sprinkle as a player who was just a 3-star recruit, which left them with limited options since neither player was highly-touted.

But after ending up in Arkansas, despite the doubters, it was the hard work and dedication that really impressed his coaches, including head coach Bret Bielema, who said that having guys who are hard workers far eclipses having four or five star recruits.

“I believe in development,” Bielema said last spring via SECCountry.com. “We’re never going to have a sexy roster of 5-stars or 4-star (recruits). We’ve got a bunch of guys that like to go to work every day and want to develop.”

It’s a trait that, as we know, Bill Belichick looks for as well, which will also hopefully make Wise Jr. a good fit here in New England. 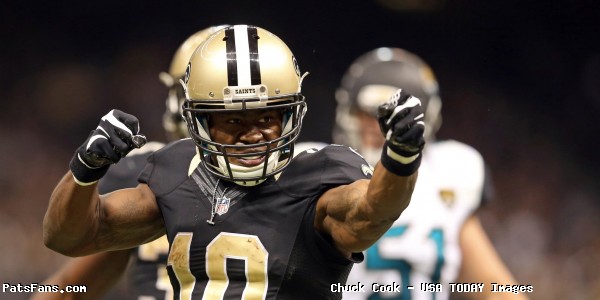 Fans haven’t even gotten to see Cooks in action in New England yet.

King Calls Cooks Deal the “Trade of the Draft” – While the Patriots only came away with four draft picks this weekend, it’s hard not to remember that one of the deals they made could become one of the biggest of the offseason, especially when the time comes for fans to get a glimpse of what the pairing of Tom Brady and former Saints receiver Brandin Cooks will look like.

In his Monday Morning Quarterback piece, MMQB writer Peter King touched on the topic and called the acquisition of Cooks from New Orleans for the 32 overall pick the “Trade of the Draft”.

“Cooks is 23, has averaged 72 catches a year in his first three NFL seasons, plays tougher than he looks, and will play for the next two years for a total of $10 million. What’s not to like?” wrote King.  “And if you’re the Saints, you feel you’ve gotten in Ryan Ramczyk a guy who’s likely going to be a starting tackle for you soon—maybe this year—and it’s unlikely they’d have signed Cooks long-term after 2018. So from each team’s perspective, it’s a good deal.”

As for the Patriots, the first media sessions will be coming soon when the team opens up sessions on a limited basis.

First-round talent tends to sometimes be a gamble and the move for Cooks is certainly less risky than taking a chance on an unknown player.  It remains as a great move by a Patriots team that is now that much deeper with him on the roster and hopefully if all goes well, he’ll also make their offense that much better.

Three Games to Glory V is Now Available! – One of the best parts about when New England wins a championship is the fact that the team releases a video with plenty of behind the scenes footage, along with unique film from NFL Films documenting what was certainly an incredible playoff run.

Now that it’s finally May 2nd, today happens to be the day that the fifth edition of Three Games to Glory is released, commemorating New England’s Super Bowl championship run and documenting the journey through the playoffs through their historic come-from-behind win over the Falcons.

It’s finally available, and the team has been teasing the video for a while now and if you’ve seen any of the footage, it definitely brings back chills experiencing some of the terrific moments from the 2016 postseason all over again.

The last player at the Patriots penultimate practice? Trey Flowers.

Coming off of Draft Weekend, the timing is certainly perfect as most of us are already fired up for the upcoming season. has it on sale on both DVD and BluRay

and you can also support our own Miguel Benzan’s charity by selecting “Bread of Life” through Amazon.com’s smile program when you order.

By: Ian Logue
With New England sitting with little cap room, something had to give in order for them to get their final three draft picks signed.
16 mins ago