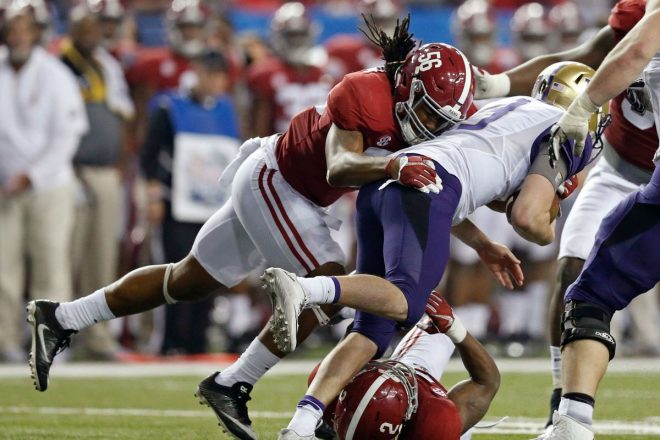 After the flurry of activity this week, the Patriots are primed to enter the season with all the pieces they need for a serious bid to repeat in the Super Bowl. Malcolm Butler has signed his tender, Danny Amendola has re-done his deal for the third year in a row and the team made an offer for free agent RB Mike Gillislee who would be a great fit.

Of course, if the Bills decline to match the Patriots offer, New England will have to turn over their 5th round draft pick to Buffalo. But for now, until that is settled, we’re moving on under the assumption that they’ll choose in Round 5.

There is a fascinating tool to use for doing a mock draft made possible by the guys over at Fanspeak.com that we touted last year and it is even more, fun to use in 2017.
In their “On the Clock” simulator, you are the GM for any NFL team. You can choose how many rounds you’d like to draft for (1-7), and pick one of nine different big boards to choose from.

For this second mock draft (4-20), I used the big board of Composite Big Board

Right now, the Patriots don’t pick until Round 3, #72 due to some of the trades that they’ve swung for Brandin Cooks and Kony Ealy. While they may still swing a deal to move up into the first two rounds, right now we’re going with what they have. In this mock, we’re going under the assumption that Malcolm Butler’s signing of his tender means that he will play in NE for at least the 2017 season so that changes our outlook considerably.

Here is our Patriots Mock Draft 3.0: 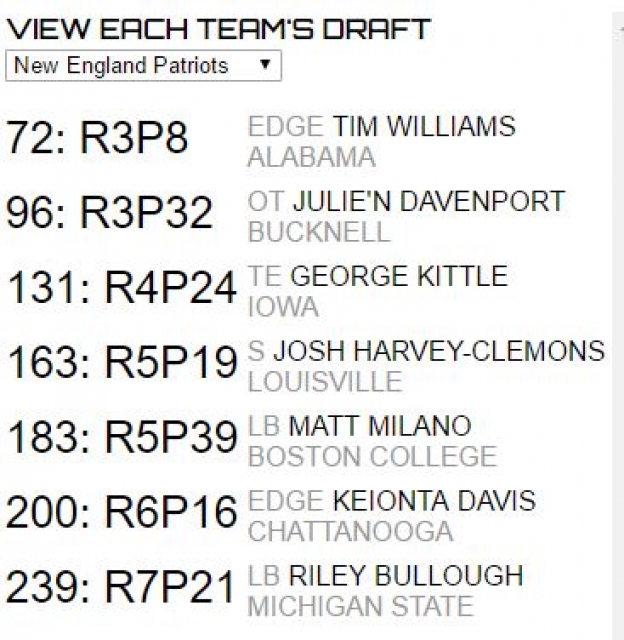 Round 3, Pick #72 Linebacker/Edge Tim Williams, Alabama:
Williams is a steal at #72. He’s a 6’4, 250-pound edge player with the frame to get bigger. He can play OLB or DE and fell in this mock down to the 3rd round over character concerns. He’s an outstanding athlete, with excellent explosion, long arms and a very consistent playmaker.

Williams played for Nick Saban at Alabama so Bill Belichick will have all the info he’d need on him. He’s a tremendous pass-rusher with excellent counter moves to get to the QB. The Patriots would use him as a DE primarily

Round 3, Pick #96 Tackle, Julie’n Davenport, Bucknell:
The Patriots have scouted Davenport and worked him out, so Dante Scarnecchia would have the final say if they can work with him. He has great size at 6’7, 318 pounds and a four-year starter. He was a team captain his final two years at Bucknell.

Has tremendous arm length and strength in his hands where he can disrupt pass rushers, has enough athleticism to get out to the second level in the running game. His balance and foot placement.

Round 4, Pick #141 TE George Kittle, Iowa:
Kittle is a 6’4, 247-pound tight end that will help build the depth they need at the position. Kittle was an honorable mention All-Big Ten pick last season, in 11 starts, he produced 22 catches for 314 yards and four TDs.

Round 5, Pick #163 S Josh Harvey-Clemons, Louisville:
Clemons has tremendous size at 6’4, 217-pounds and would be the heir apparent to Pat Chung as the box safety. He has rare size, length, and athleticism for a man his dimensions. He’s a physical, tough tackler and will be the in-the-box safety and be able to play the hybrid linebacker role, the “Big Nickel” for the Patriots.

He’s not a deep cover safety and at times takes poor angles to the runner. Was dismissed from Georgia after three failed tests for marijuana.

Round 5, Pick #183 LB Matt Milano, Boston College:
Boston College has been churning out very good linebackers from their program from Mark Herzlich and Luke Kuechly and now Milano, who stepped up big for the Eagles the past two seasons. He turned in a very solid 2016 season with 58 tackles, 11 for a loss, 6.5 sacks, one interception, and a blocked punt.

The undersized (6’0, 233-pounds) Milano plays “like a heat-seeking missile” on the defensive side of the ball, flying around the field looking for contact. He played 94 percent of the Eagles snaps in 2016 and has speed toughness with very good instincts in pass coverage as a converted safety.

Special teams’ standout in Chestnut Hill with three blocked punts and 24 STs tackles. We took him in our Mock 1.0 draft and he’s here again in the third and will be a great value pickup

Round 6, Pick #200 Edge Keionta Davis, Chattanooga:
Davis had his second straight FCS All-American season in 2016, tallying 10.5 sacks and three forced fumbles. At 6’3, 274-pounds he has the length and strength to take on offensive linemen in the trenches.

Round 7, Pick #231 LB Riley Bullough, Michigan State:
Bullough comes from a football family devoted to the Spartans. His father (Rose Bowl 1982), uncle and brother all played at Michigan State. He’s very athletic, plays downhill and flies all over the field. He was named the team’s “Most Inspirational Player” for the past two seasons.

But at 6’2, 226, he’s not big enough to stand up to the physicality of the NFL as an inside linebacker. His path to the league will be as a special teams’ standout and his mentality, and athleticism will be a perfect fit.

By: Robert Alvarez
Rob Gronkowski shares his thoughts on the Patriots bringing back Bill O'Brien to run the offense and voices his excitement and optimism.
17 hours ago