Plenty of Questions Remain About Hernandez – The surprise news surrounding the death of Aaron Hernandez kicked things off on Wednesday, and as news began to come out with the details surrounding his death, it had a similar feel to when he was first arrested and charged with the murder of Odin Lloyd back in 2013.

That June afternoon back in 2013 was unbelievable.  It was followed by most here in New England on Twitter as one by one, the news began to emerge fast and furious with all the reports from all the reporters who were following the story.  Most had spent the week camped outside his house, with many wondering if what police had suspected about the star tight end was true while waiting for something to happen.

Eventually, they got what they had been waiting for and when the news broke that he was being charged with murder, it came as a shock to every person in New England who had likely been hoping the rumors didn’t hold merit.

Within minutes from the moment he was officially charged with murder, his time in New England ended almost immediately when the Patriots wasted no time in cutting him.

His release came on the heels of a $40 million extension he had signed just over a year earlier, which should have ensured a bright future in the NFL and a new start for Hernandez.  Unfortunately, money wasn’t enough to keep him out of trouble and it all ended in an arrest at the home where he should have been focusing on enjoying his family and his football career.

But, just like that, it all ended in an instant.  It took little time for police to close in on the veteran tight end, having pieced together the timeline of events leading up to the death of Lloyd so perfectly that as we learned the details of all the evidence, it was overwhelming.  The more we learned, the more everyone was shocked to find out that the same exciting player they all rooted for was not who any of us thought.

The news was certainly hard to believe, but the facts were chilling.  Hernandez had gunned a man down in cold blood, the same man who looked like an exciting piece to New Engalnd’s future, with one of the only players to be caught on camera getting some love from Bill Belichick during a funny moment.  Who would have ever expected this from him?

Eventually, his conviction solidified everyone’s suspicions, which even to this day are a little tough to fathom.  Up until his victory in court last Friday, he had more or less faded out of the picture since he was still in prison serving a life sentence without the possibility of parole.   Hernandez’ life was effectively over, and after taking his own life, the young family that should have been his focus are now left with questions of what could have been.  But more importantly, so are the loved ones of the victims he took down with him and the lives he destroyed prior to his death.

They’ll have a tiny bit of closure knowing he’s gone.  As for Hernandez, his family and those close to him will be forced to wonder how he ever got to the point to make him select the life he chose and if they could have done anything to prevent it.

It’s a tragic end to a story where no one involved had a chance for a happy ending.  Now he’ll be nothing more than a cautionary tale, but hopefully, if nothing else, his death will prevent at least one person or player from going down the wrong road while ensuring history never again repeats itself.

Visit to the White House Leads to A Bit of Trolling By the New York Times – Despite Tom Brady being a last-minute cancellation due to what he called a “personal family matter”, the Patriots still had a strong turnout for their visit to the nation’s capital but that didn’t stop the New York Times from stirring the pot a bit.

They posted a comparative photo of New England’s visit from 2015 vs the one that occurred Wednesday afternoon, which on the surface looked like a smaller turnout.

Overall, 34 of the team’s Super Bowl Champions were on hand Wednesday to meet the president, with the Boston Herald posting the full list of players who were there including Rob Gronkowski, Julian Edelman, Stephen Gostkowski, Malcolm Mitchell and Jimmy Garoppolo among them.

Gronkowski had a little fun with Press Secretary Sean Spicer after crashing Wednesday’s session, but Spicer took it in stride and it was one of the lighter moments of the day.

“Since Bob bought the Patriots in 1994, they’ve won more division titles, conference championships and Super Bowl wins than any other team.  No team has been this good for this long,” said Trump via the Boston Herald.  “He’s built a culture dedicated to winning. And he started it with his coach — and I want to tell you, that is some special man — it’s called the Patriot Way. And that really starts with Coach Belichick.”

“And I want to thank all of you for being with us. The Patriots are an incredible organization, and this Super Bowl victory was a complete team effort. That’s the beauty of what they do — they win as a team.”

And, of course, what trip wouldn’t be complete without Gronk giving the president a fist bump?

Jackson Claimed By Rams –  One day after being released by the Patriots, offensive lineman Tre’ Jackson already has a new home.

According to the Los Angeles Times, Jackson was claimed off waivers by the Rams, making him the third offensive lineman to join the Rams under new head coach Sean McVay.

It’s a great opportunity for Jackson, who if he can return healthy should be a player who could be in the mix to earn a role this season as the team continues trying to build a solid nucleus around quarterback Jared Goff.

The former fourth round of the 2015 NFL Draft appeared in 13 games during his time in New England, making nine starts at right guard his rookie season and showed quite a bit of promise. Hopefully, he’ll enjoy continued success with his new team. 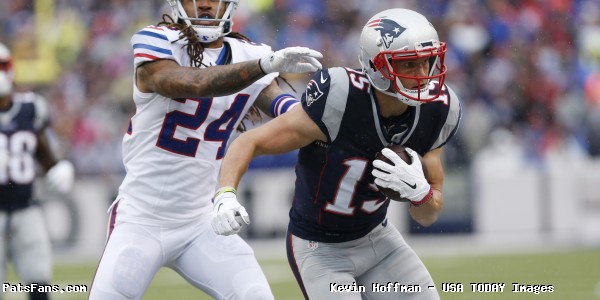 Chris Hogan had success against his former team in 2016.

Buffalo Still Reeling From Gillislee Offer Sheet – You can tell the Bills are not happy about the Patriots potentially getting the better of them for the second straight season, and the overall mood in that region right now reeks of frustration.

Vic Carucci of the Buffalo news had a column on that very topic Wednesday, pointing out that the Bills can overcome the Gillislee’s potential loss but the fact the Patriots might potentially pluck a talented player off their roster for the second-straight year remains one of the most aggravating parts of this whole situation.

It’s because the Bills have opened themselves up to the type of blistering criticism they received from national sports-talk host Colin Cowherd, who talked about Bill Belichick once again taking advantage of “poorly run” franchises such as the Bills and Cleveland Browns.

Seeing the Patriots looking to reload for another Super Bowl run with the help of former Bills players is what makes the Gillislee situation harder for a lot of the team’s loyalists to stomach. Seeing it happen with a restricted free agent for the second offseason in a row is galling to them.

Carucci also writes that the issue has less to do with “surviving without Gillislee and more about weathering the embarrassment/frustration/anger over another round of Patriot raiding.”

There’s already one day in the books, leaving the Bills with just four days to match his offer sheet.