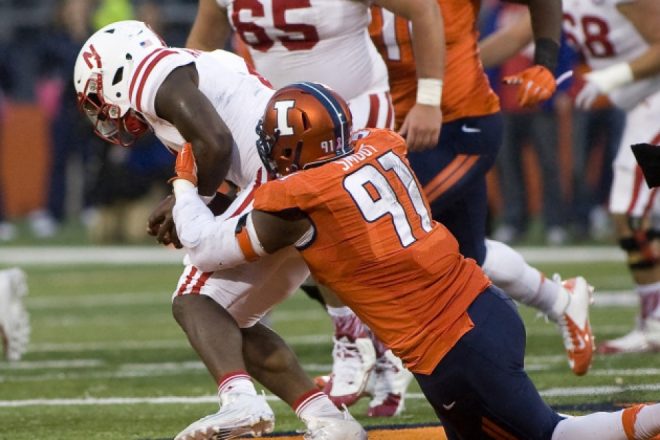 The Patriots are thin at defensive end; Jabaal Sheard has left via free agency for the Colts and Chris Long has signed with the Eagles this week. The team did pick up Kony Ealy from the Carolina Panthers in a trade. That leaves him, Trey Flowers, Rob Ninkovich, and Geneo Grissom. Flowers came on and played fantastic down the stretch and into the playoffs. Ninkovich seems to be closer to the end of his career rather than the beginning. Grissom was strictly a Special Team’s guy. So, they’ll need to add some depth.

Edge rushers are like cornerbacks, you can never have too many good ones and the team is expecting Flowers to continue to improve on his 2016 season. Ealy has flashed at times and had an incredible Super Bowl with Carolina but hasn’t been able to do it consistently. His former coach Ron Rivera has said that being around Bill Belichick will be good for him and that he needs to take to his coaching. The Patriots will have plenty of options in the draft but right now don’t pick until the third round (#72 overall).

Dawuane Smoot from Illinois is a 6’3, 264-pound defensive end from Illinois and seems like he’s a Patriots kind of guy. He’s got very good explosiveness off the snap and shows good bend and flexibility when turning the corner. He changes direction very well with excellent athleticism. He was a very good high school hurdler.

In 2015 he was named honorable mention in the All-Big Ten, starting 12 games and logged 40 tackles, 15 for loss, eight sacks, and three forced fumbles for the Illini. Smoot was a team captain and a third team all-conference pick in his senior season, being credited with 56 stops, 15 for loss, and five sacks. The team had him play lighter in his senior year which no doubt hurt his strength and may be part of the reason his production diminished in his final season.

Smoot showed the quickness to shoot thru gaps and find the ball carrier for a loss in the running game and has a good rip move when rushing off the edge. He played for defensive guru and former Bears coach Lovie Smith. He is extremely well conditioned and will play sideline to sideline and doesn’t give up on plays.

– Good speed and explosiveness off the edge

– Versatile, can play either DE or OLB

– Needs more moves in his repertoire as a pass rusher

– Sometimes gets swallowed up in the running game

– Needs to get bigger and stronger at the NFL level

What his Role Will Be:
Smoot’s role would be to be a part of the rotation for the Patriots on the edge as a sub-package pass rusher. He could be asked to drop into coverage a bit as well.

Will his Role Change from Year 1-2?
Yes, with some added strength and weight in the Patriots strength and conditioning program, he could vie for a bigger role and push for starting reps

What Current Player on the Roster Will He Replace?
Geneo Grissom, Smoot will have to show that he’s able to contribute on Special Teams. But with a strong training camp, may push for some reps defensively early

What is his ST Value?
Limited, but that will change.

Conclusion:
Smoot is a guy that will put some weight on in the NFL which should help his functional strength. He has the ability to get under the pads of pass blockers and has good pass rushing moves. He uses his hands well but at times inconsistently. He can convert his quickness to power and can collapse the pocket. He has a knack of smacking the ball away from running backs or QBs when turning the corner and forced four fumbles in the past two seasons.

He’s a guy with very good upside, he has a tremendous motor that doesn’t quit, he can develop into a very solid pass rusher that can set the edge in the running game. He can also drop into coverage and change direction due with loose hips and very good agility.

Smoot is another player that should around in the 4th round of the draft. If he’s there, the Patriots would have the option of picking him up. He could become part of the rotation on the edge and provide a sub-package pass rusher on obvious passing downs. Eventually, with some added strength and power, he could become an every down solid, pass rusher.