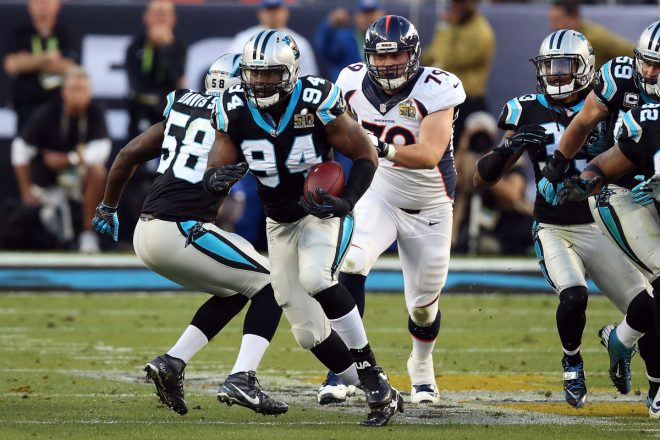 The Patriots made a trade with the Carolina Panthers on Friday afternoon acquiring DE Kony Ealy and the Panthers’ 3rd round draft pick in exchange for the Patriots 2nd rounder. The deal was first reported by Adam Schefter of ESPN.

In 2015, he recorded five sacks but was unblockable in the Super Bowl loss to the Broncos. In just 23 snaps, he recorded three sacks, got an interception and forced a fumble.

He didn’t make the big leap forward in 2016 that was envisioned, however, and logged just 32 tackles, 5 sacks and an interception in 2016. Ealy’s issues have been ones of consistency when he’s on, he’s virtually unstoppable. But the light hasn’t really come on for him.

Perhaps getting a fresh start in New England will allow him to do just that. He’s just 25 years old and has done a good job of stopping the run. The Patriots will ask him to do that and rush the passer, something he excelled at while in Missouri.

With Chris Long and Jabaal Sheard leaving in free agency, it leaves the Patriots thin at DE with Trey Flowers and Rob Ninkovich who is closer to the end of his career at this point. Ealy immediately improves their depth and we look for the Patriots to add another edge rusher during the upcoming draft where the stock is deep.

The value of the trade is a good one for New England. They get Ealy and only move down 8 spots from the #64 to the #72 pick in the third round.