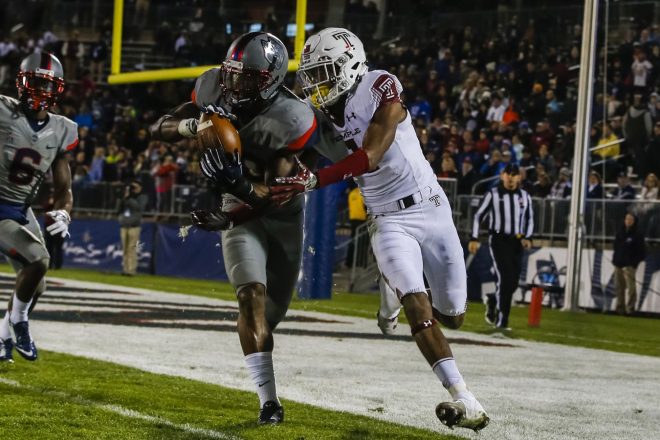 The Patriots have some holes to fill and some intriguing decisions to make in the coming weeks with Free Agency right around the corner and the NFL Draft coming up in April.  And in the Patriots secondary, with Logan Ryan and Duron Harmon probably leaving via free agency, the holes to fill are big. Well, UConn has a big safety that may be just what the doctor ordered in Obi Melifonwu.

Melifonwu crushed it at the Combine; he measured in at 6’4, 224-pounds. He’d be the biggest member of the secondary by far. But the kid can move, he had a broad jump of 11’9 and a vertical leap of 44 inches. But the thing was, when they announced his vertical leap, he seemed disappointed that it wasn’t more. He then ran a 4.40 in the 40 which is incredible for a player of his size.

Mike Mayock was raving about his versatility and that may be his biggest selling point. Melifonwu can play centerfield as a deep safety, has the size, physicality and tackling ability to play in the box. And as Mayock pointed out, with a matchup team like the Patriots and Bill Belichick, he can matchup with big tight ends one week and the next week be put outside on a big wide receiver the following week.

Melinfonwu was an outstanding player in Central Mass at Grafton High School before going to UConn. We reached out to his high school coach, Chris McMahon about what makes him tick and what kind of young man he is.

McMahon credited Melifonwu’s mother, who kept his feet and those of his brothers firmly on the ground. “You’ll never find a nicer, polite group of kids and I credit Mrs. Melifonwu for raising them that way.”

“I knew he had unlimited potential, and you knew just from watching him if he could put everything together, he would explode. And his on-field performance today…that was just incredible. He’s a tremendous athlete and an extremely hard worker. Even during college spring breaks, the kids all go to Florida, he’d come back up here and hit the weight room,” McMahon said.

“Obi was one of the best players ever to come thru our program [Grafton] and one of the best in CMass in years. He played QB, RB, WR, and returned kicks he scored fifty-something touchdowns for us, and on defense, he played corner, safety, and even some linebacker.

“It seems like yesterday that came here as a freshman and amazing to see the man that he’s become. Like I said, you always knew it was there, and it happened really quick for him at UConn. McMahon talked about the buzz that is going on with the draft now and the fact that Melifonwu may end up being a first-round draft pick. “My phone hasn’t stopped ringing,” he added.

The crazy part is, Melifonwu may not even be the best football player in the family. His younger brother Ifeatu, known locally as “Iffy” just finished a stellar high school career at Grafton and is heading for Syracuse. Last summer while working out with the Syracuse coaches he ran a 4:50 in the 40….but that is for another day.

The Patriots could add a very intriguing, and versatile piece of the defense in April when the draft rolls around. It is easy to envision Melifonwu wearing a bunch of different hats depending on the opponent from week to week.

He’d be a tremendous fit in the Patriots defense as well as in the locker room. And he’d fulfill a position of need.