We’ll be doing profiles on each of the free agents in the upcoming days and give you our take on whether they return or move on. One of the players facing free agency is the reserve running back Brandon Bolden.

The Patriots signed the running back as an UDFA from Mississippi in 2012 and Bolden the 5’11, 220-pound running back has been a fixture of the Patriots special teams ever since. But the Patriots need some depth at the position with Bolden, LeGarrette Blount, and James Develin all free agents this season. They also have two backs (James White and Dion Lewis) in the final year of their contracts. 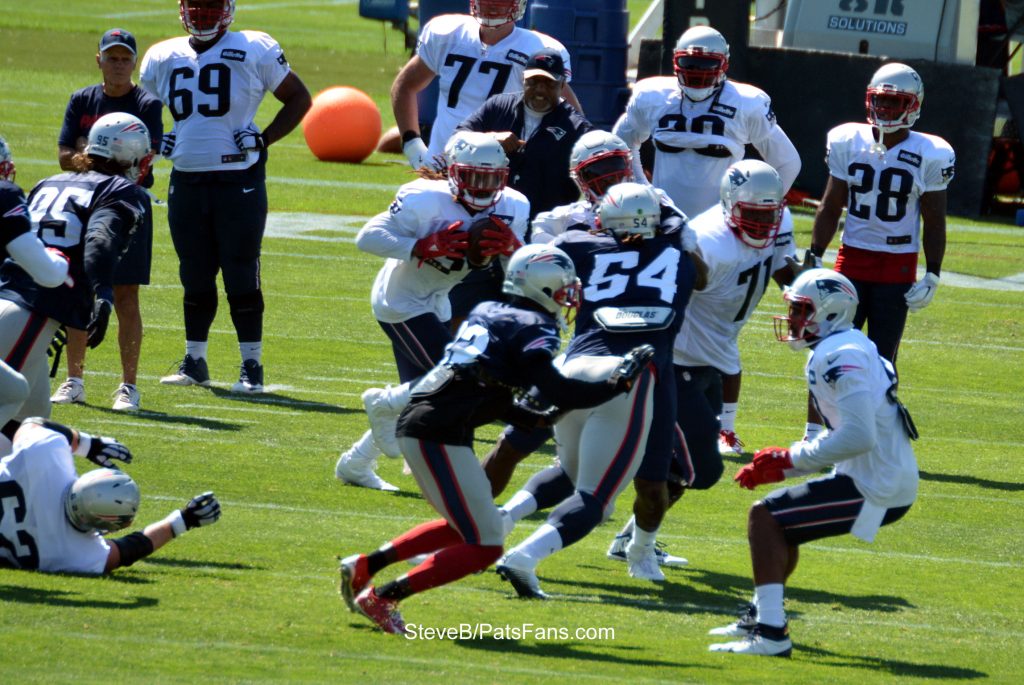 Bolden’s roster spot has always been tied to his being a core special teamer who could contribute when needed on offense. With the overall health of the backs better this season he had the least production of any year of his career in 2016 with just one carry for four yards and two receptions for 15 yards.

The 27-year old, however, is always prepared to enter a game when needed and play some important snaps on offense when his number is called. That’s why he remains a trusted teammate and player on the 53-man roster.

Why Bolden Will Return: The Patriots have always valued Bolden and his versatility. He’s a good runner that can show power, a good pass receiver out of the backfield as well as a core special teams player that plays on all four units in the kicking game. Bolden’s versatility to fulfill multiple roles is a reason he’s always active on the 46-man game day roster. He frees up the coaches to use another player elsewhere.

The Patriots know his usefulness and should be able to re-sign him easily back to the team without breaking the bank. He’s still young at 27 with very little tread wear on his tires and could be counted upon to continue his role for the next couple of seasons.

Bill Belichick has always valued his special teams’ performers and Bolden is one of the standout every season. He logged special teams tackles in the divisional playoff win over Houston and the Super Bowl victory over Atlanta.

Why Bolden Won’t Return: There is a chance that the Patriots will want to upgrade and get younger at the running back position overall in 2017. This year’s draft class is deep and there will be a number of prospects both early and in the middle rounds that could be of interest to the team.

ESPN’s Mike Reiss pointed to Rams’ RB Benny Cunningham may be on the Patriots radar again as a free agent. As a restricted free agent last year, he took a visit to New England. Like Bolden, he’s a core special teamer with good return ability and at 26, is a bit younger. He’s also an upgrade offensively as he’s a bit better as a runner and much more productive as a receiver.

Bottom Line: The Patriots and Belichick have always valued Bolden’s STs ability and his versatility. He’s been a key ST’s member of two Super Bowl winning teams and comes from a football background. His grandfather played in two SBs with the Chiefs, winning SB IV over the Vikings.

His versatility and the low cost of retaining his services make Bolden an attractive target to re-sign this spring. There will be little demand for his services as a Special Teams’ performer although there may be a team that really needs a boost in that department and would be willing to pay. Houston with former Pats STs standout Larry Izzo as their STs coach could be a destination. Especially with their dreadful showing in the playoffs.

With a deep crop of running backs in the draft, look for the Patriots to either pick one or two up with their picks or signing one as an UDFA in an attempt to get deeper and younger. Bolden’s chances of returning a bit better than 50/50 in 2017 but he should see some competition this spring and summer.