The Patriots will enter the beginning of the 2017 league season with several important decisions to make in regards to free agency. While the team has the third most salary cap room in the NFL this season, they have a slew of free agents including several who are either starters or important role players. We’ll be doing profiles on each of the free agents in the upcoming days and give you our take on whether they return or move on. One of the starters is tight end, Martellus Bennett.

The Patriots swung a deal for the disgruntled tight end with the Bears and were hoping that pairing him with Rob Gronkowski would give them a two-tight end offense that would be impossible to stop. But it didn’t work out that way. Gronkowski was injured early in the season and wasn’t healthy until Tom Brady’s first game back from suspension.

In Week 5, Gronk broke out with 5 receptions for 109 yards and Bennett scored three touchdowns. But Bennett was hurt in that game and the ankle injury limited him all season long although he played through it and a knee issue. Gronkowski would be injured again later against Seattle and then injured his back which landed him on IR.

So, while the dreams of Gronk and Bennett as a dynamic duo were never truly realized, Bennett provided excellent insurance with Gronk out of the lineup. The 6’6. 270-pound tight end isn’t the deep threat that Gronkowski is but despite being far from healthy himself gave Tom Brady a viable target at tight end as well as a tremendous blocking presence in the running game.

Bennett caught 55 passes for 701 yards and 7 touchdowns. He completely bought into the team-first concept and he seemed to be a popular teammate in the locker room. He’s also a very straight shooter and was one of the most quotable players on the team. He was a joy for the beat writers who are well accustomed to the players who tote the party line and give very little many times.

With Gronkowski on the mend, the team should they re-sign Bennett can still have that dynamic two-tight end offense they envisioned last summer. Or, once again with the myriad of injuries that Gronk has suffered, he’d give them an outstanding insurance policy. One thing for sure is, he’ll have plenty of suitors once free agency begins.

Why Bennett Will Return: Bennett seemed to genuinely enjoy his time here in New England. He and Brady worked hard during the spring and summer to build up their chemistry and Bennett was quickly elevated into Brady’s ever-so-important circle of trust. 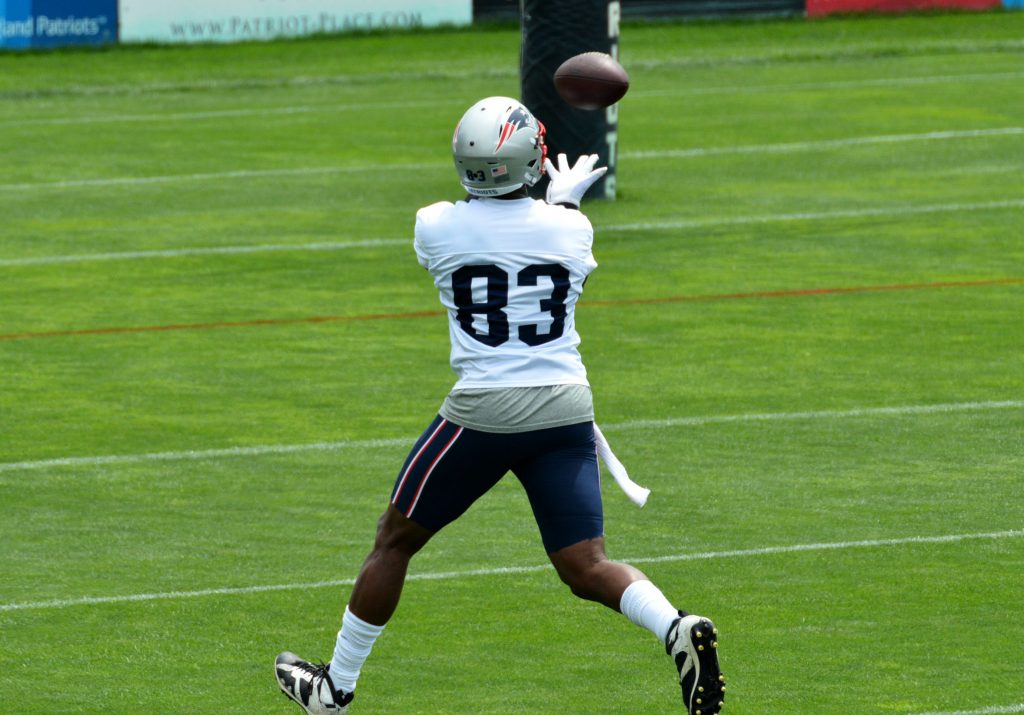 He has the skill set to be even more prolific in the Patriots offense and once fully healthy could be a more dynamic presence in the passing game. His blocking prowess, something Bennett prides himself on, was a big reason why the Patriots running game was much improved in 2016.

And the Patriots have the salary cap room, with $61,498,583 in space under the cap, they have the flexibility to work out a deal that would not only pay Bennett what he feels he’s worth but give him an opportunity to win another Super Bowl ring.

Bennett will turn 30-years old this offseason, and this should be his last chance at a big payday which someone is going to pay him more than New England. He reportedly turned down an extension from the Patriots during the season for $7 million.

His comments right after the Super Bowl victory seemed like someone who is already resigned to leaving. Which probably means that Bennett is intent on testing the waters of free agency to see what his worth on the open market is.

Bottom Line: It is probably just a one and done for Bennett in New England. The Patriots rarely pay players past their 30th birthdays’ top dollar and there will be teams lining up to meet his demands. Among them Jacksonville, the Giants and possibly Oakland.

I doubt the Patriots will pay him more than Gronkowski who is slated to earn $9 million this season. While we’d love to see him back with the Patriots in 2017, the chances of that happening are rather slim. They won’t use the franchise tag on Bennett, probably saving that for Dont’a Hightower.

Never say never, but there should be plenty of interest in a big, athletic tight end who can catch the ball and block in the running game. The Patriots rarely if ever overpay for a player so the chances of him returning are probably less than 25 percent.