6 years ago at 5:15 am ET
Follow @IanLogue
Posted Under: Patriots Commentary

It’s been a long stretch for this football team and the 2016 season hasn’t been a stranger to adversity.

They started the year with Tom Brady sidelined thanks to his suspension while also going without Rob Ninkovich over that same span, who was also suspended for testing positive for a banned substance. That left them short-handed on the defensive side of the ball as they tried to develop a unit that seemingly had a bad apple in Jamie Collins that was apparently so rotten it required sending him to Cleveland in order to improve it.

Then, they lost what many feel was one of the key components of their offense in Rob Gronkowski to a season-ending back injury following a huge hit by Seahawks safety Earl Thomas, which could have derailed the rest of their season and their postseason run.

Mixed in with that has been a rash of injuries and misfortune that could have changed the course of their season, yet they managed to go 3-1 without Brady and 11-1 with him.  They’ve also won two-straight playoff games and now find themselves having earned a chance to go to Houston and win one more. 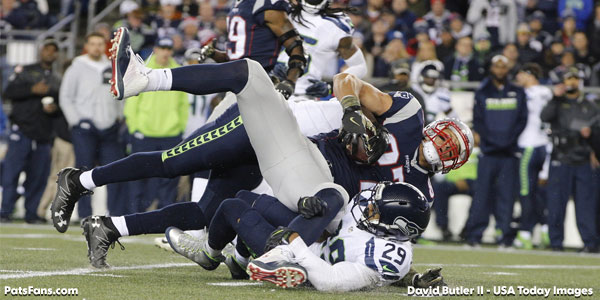 Gronkowski’s injury is just part of what they’ve had to overcome in 2016.

It’s been an incredible year and Bill Belichick talked about all of the adversity after the win over the Steelers and gave the credit to his players, whom he called a special group.

“We never dwell on that,” said Belichick on the problems they’ve faced.  “We take the hand that we’re dealt and play the cards.  We’re very fortunate.  We have a good team, we have a lot of good players, we have good depth. Nick Caserio and his staff, Dave Ziegler on the pro side and Monti [Ossenfort, Director of Scouting Administration] on the college side and all the guys that work in there.  I mean, they’ve done a great job of helping to build the depth on this team.  Look, every team has injuries, every team loses a player, it’s unfortunate, but that’s just life in the NFL.”

“But we’ve had players that have been able to work hard, be prepared and take advantage of those opportunities and help the team win in all three units in really every game.  You reference the beginning of the year, but it’s been true in every game, really.  It’s a credit to those guys, it’s a credit to the depth on our team and the way that those guys prepare.  They work hard.  They don’t know if they’re going to get an opportunity or not, but then when it finally comes and they do get it, they’re usually ready to take advantage of it and help the team win.  And that’s why we’re where we are.”

Where they are now is in the driver’s seat and playing what has arguably been their best football.  They held Pittsburgh to just nine points until they gave up a garbage-time touchdown near the three-minute mark in the fourth-quarter while watching Brady go out and have the best postseason performance of his career.   These are moments that you hope for in the postseason and while Belichick isn’t big on reflecting, he admitted that so far, this has been a special season.

“We have a special team, a special group of guys that really work hard and they deserve the success that they’ve had.  I mean, it’s hard to win 16 games in this league and … gotta give a lot of credit to the players and the job they’ve done all year, week after week.  It’s tough, but they come in and grind it out, man, they sit in these seats for hours and hours and hours and prepare and prepare and go out there and lay it on the line every week. It’s a good group of men.”

By: Mark Morse
Both games are in the books and we have learned about several players we have not seen play.  The practices leading up to the games…
25 mins ago