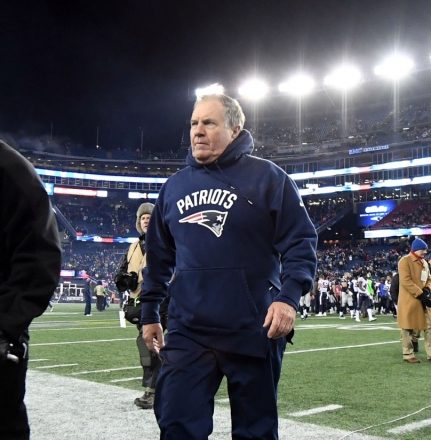 Saturday night didn’t go quite the way they hoped it would, but despite a multitude of miscues on their part along with some good moments by Houston, the Patriots find themselves heading to a record sixth-straight AFC Championship next Sunday at Gillette Stadium.

It was far from perfect, with interceptions, fumbles, and mental mistakes plaguing what could have been a much bigger victory for a Patriots team who had an uncharacteristic night in a game that against better competition could have most definitely gone the other way.

Meanwhile, the Texans came into Saturday night’s game as huge underdogs but you never would have known that watching how they played.  All things considered they put together a strong effort and did all the right things to give them an opportunity to pull off the upset.  They got after Tom Brady early and often, sacking him twice in the first half and pressuring him throughout much of the game.  They also did a good job against the run early on, holding New England to just 19-yards rushing over the first two quarters.

The Patriots got off to a quick start, which was part of what really allowed them to keep control of the game.  Despite stalling on their first drive, New England forced a three-and-out against Houston and then went to work on offense after capitalizing on a 30-yard pass interference penalty by the Texans.  Brady completed a 22-yard pass to Chris Hogan, which helped set up Dion Lewis’ first touchdown of the night as he hauled in a 13-yard pass for the score to go up 7-0.

But then after the defense was on the verge of forcing another three-and-out after holding Houston on a 3rd-and-18, Patriots cornerback Eric Rowe kept the drive alive for the Texans after he pulled one of their players out of the pile following a 10-yard reception by DeAndre Hopkins where Hopkins had seemingly lost the ball, which lead to players battling on the ground for the football.  Rowe ended up drawing an unsportsmanlike penalty, which gave Houston a new set of downs.

Bill Belichick was livid.  He lit into Rowe as the defensive back made his way over to the sideline after the play, and with good reason.  That penalty gave Houston new life and the Texans marched down the field and got on the board with a 33-yard field goal, which cut the lead to 7-3 and gave them some confidence.

Lewis would run the ensuing kickoff back 98-yards for the touchdown, but the Texans had the momentum they needed to make a game of it.  That was the last bright spot the Patriots would see for a while because the second quarter started a string of mistakes that will likely be a source of discussion heading into next weekend’s AFC Championship game. 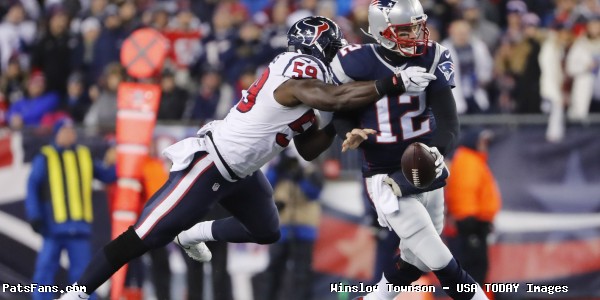 Brady found himself under pressure for most of the night against Houston.

It started on the Patriots’ first offensive play of the second quarter, as Brady threw just his third interception of the year on first-and-10 from their own 20.  The veteran QB threw a pass intended for Michael Floyd on a slant that was a little too far out in front and it went off Floyd’s hands and ended up in being picked off by Texans CB A. J. Bouye.

That gave Houston the ball at New England’s 27-yard line.  Six plays later, Houston kicked a field goal and they chipped the lead down to eight at 14-6.

On the ensuing kickoff, Lewis attempted another run back but he was absolutely drilled, losing the football and Houston recovered at the Patriots 12-yard line.  Two plays later, the Texans were in the end zone and suddenly everything changed as all of a sudden they trailed just 14-13.

Meanwhile, defensively one thing that stood out was the fact Houston managed to get quite a bit of pressure up the middle, which caused Brady a lot of problems.  That’s an area that generally hasn’t been an issue this season but on Saturday night, the veteran QB couldn’t step up or get away, leading to quite a few hurried throws along with some big hits against him.  Most of the pressure this season has generally come from the outside and Brady had done a good job rolling away and making plays.  Instead, against Houston, he found himself with a player in his face and as he tried to roll out, often found someone else waiting for him.

Teams will likely look at this game and try to mimic some of what Texans defensive coordinator Romeo Crennel did, which is certainly something Belichick and the coaching staff will need to address as they go over the film this week.  Brady’s no stranger to teams coming after him, but pressure up the middle is a major problem that they’ll need to prevent moving forward because it was the first time all year Brady’s had that much pressure thrown at him inside.

Overall, it will go down as another one in the win column but it’s one they’re fortunate came against an opponent that wasn’t able to capitalize on New England’s mistakes.  The competition only gets better from here, which they’ll find out next week and, if they’re able to advance, against whoever is left standing out of the NFC.

Sometimes it takes a game like this to provide a wake up call, and the Patriots are lucky to be able to walk away without having to spend an offseason thinking about all the things that went wrong on Saturday night.  Belichick certainly knows how lucky they are to still be left standing, and he’ll likely spend this week reminding his players of that fact.

“We have to play better, we have to coach better than we did tonight, or there won’t be much left in our season,” said Belichick after the game. “Hopefully we can do that and up our level of performance next week.”