6 years ago at 11:08 am ET
Follow @IanLogue
Posted Under: Patriots Commentary

After improving to 12-2 on the season, here’s a quick look at five things we learned about the Patriots following their 16-3 win over the Broncos on Sunday.

1) It wasn’t easy, but Brady battled after a slow start – After starting the game 0-for-6 throwing the football in the first quarter, Tom Brady went on to complete 8-of-10 in the second quarter as the Patriots took control of the game and never looked back as they won their 12th game of the season.

His frustrating start was the first time he’s opened a game that way in a long time, and you actually have to go all the way back to a match-up against the Giants in 2003 to find the last time that happened. And much like Sunday’s win, that game ended in similar fashion as the Patriots went on to beat the Giants 17-6.

Brady admitted after the game that overcoming adversity and adapting in games like this when they’re struggling is sometimes necessary, and they’re fortunate they were able to find a way to win.

“That’s ultimately the most important thing,” said Brady when it comes to trying to work through it.  “You’re going to always find different ways to try to move the ball down the field. I thought we did a decent job of that at times but I think there were some self-inflicted errors that caused us some problems on offense.”

‘It was good with turnovers and field position and that makes it tough on the other team. We’ve been on the other side of that too, and, you know, that’s the way it goes.”

2) Marcus Cannon’s improvement can’t be overstated – It’s pretty rare that anyone is able to render Von Miller ineffective, but on Sunday, that’s exactly what Cannon managed to do against a player who absolutely tormented him last January as the Broncos beat up and battered quarterback Tom Brady.

Against Denver, Cannon managed to make Miller about as invisible as J.J. Watt typically has been each time the Patriots have faced him, which is something that can’t be overlooked.  One of the things that was pointed out during the broadcast was the fact Cannon did a good job keeping Miller away from him, preventing the outside linebacker from getting in close and pulling him down.  That’s something that Dante Scarnecchia mentioned earlier this season was a point of emphasis for Cannon, who overall has been a completely different player, to the extent that it earned him a contract extension.

But overall, his struggles were a major storyline in the loss back in January so he deserves just as much credit after what he was able to accomplish on Sunday.  Fortunately for this season, there likely won’t be another trip back to Denver in their future but as far as this visit is concerned, it’s definitely mission accomplished for the veteran tackle.

3) Another solid performance for the defense – Anyone out there who still doubts New England’s defense needs to start taking this group a little more seriously after what they did on Sunday.  They shut down Denver’s offense and also took the football away, with Logan Ryan making a key red zone interception to start the second quarter. That play quieted the crowd and gave the Patriots some momentum as they marched 46 yards on 7 plays, which ended after LeGarrette Blount punched it in for his franchise-record 15th rushing touchdown and put them up 10-3.

Overall the defense held Denver to a paltry 2-of-12 on third down, and did another terrific job of swarming to the football as they continued last week’s improvement tackling in the open field.  There’s been a noticeable improvement in their spacing and being more aggressive at coming up to make the stop while holding opponents to short gains.

They also held Denver’s ground game in check, with 13 of the Broncos’ 17 carries being held to 5 yards or less as they managed just three rushing first downs.

The Patriots finished Sunday sitting all alone at the top of the NFL standings in points per game allowed after dropping that down to 16.6 (ahead of the Seahawks at 16.8) and the results certainly speak for themselves.  This is a group that forced five consecutive three-and-outs in the second half, frustrating the Broncos and keeping them from getting back into the football game.

They’ve come a long way since the early part of the season, and the way they’re playing right now is exactly where they need to be heading into the postseason.  For anyone out there who still has doubts, this is a group that’s better than you think and they’re certainly good enough to hang with anyone.  It’s the points on the scoreboard that matter, not style points and after this week, they’re now the best team in the league in that category. 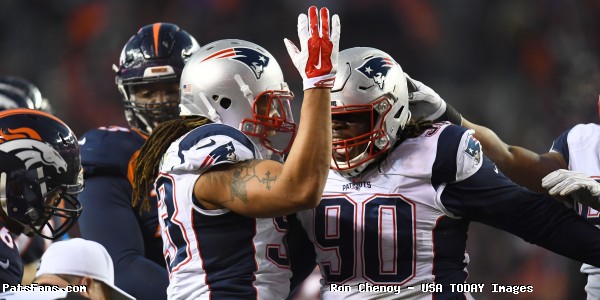 Like it or not, this defense is for real. (USA TODAY Images)

4) Lewis and Blount were the difference in this match-up – Being able to run the football was one of the biggest things missing for the Patriots back in January and Sunday was a glaring reminder of that fact.

With Dion Lewis and LeGarrette Blount, the Patriots kept pounding the Broncos’ defense and did so with some degree of success, with Lewis finishing the afternoon with 95 yards on 18 attempts, averaging an impressive 5.3 yards per carry.  Their commitment to the run was also one of the key reasons why the 17 quarterback hits Denver put on Brady back in January (it was initially 20 before the league later adjusted that total) was just 5 on Sunday as the Broncos sacked him just twice.

They did a good job of keeping them off balance, allowing New England to keep slashing them just enough to move the football.  Down the stretch, these two players are going to be critical heading into the playoffs and for Lewis, this was far and away his best performance since he returned to the line-up.  Hopefully that will continue in the weeks to come.

5) Special Teams were big this week – Sunday’s win in Denver came largely thanks to three field goals by Stephen Gostkowski along with the fact New England won the field-position battle against the Broncos.

Julian Edelman handled the punt return duties on Sunday while Cyrus Jones was inactive for the game, finishing the day with three returns for 21 yards along with three fair catches.  Having Edelman out there obviously wasn’t ideal, but it provided a sure-handed receiver on an afternoon where a miscue could have been the difference in the game and for Denver, who muffed away one of their punt returns, it ultimately was.  Fortunately, this time, the Patriots were on the right side of things this week.

Meanwhile, Ryan Allen had a tremendous game, flipping field position throughout the game, with his first kick being too tough to handle as Denver turned it over, while four of his next six kicks included a touchback along with three more inside the 20-yard line, two of which were inside the 10.  That was huge and it gave the Patriots’ defense plenty of room to work.

On the other side of the football, Gostkowski was essentially automatic, drilling three field goals of 45, 40 and 21-yards respectively.  He’s now hit nine consecutive field goals going back to the Patriots battle with the Rams, as well as the two he hit after missing from 39-yards against the Jets the week before.

That’s a pretty good streak and if ever the Patriots needed him to start getting his confidence back, this is definitely the time.  As a result, things are starting to look up, which will obviously be important heading into the postseason.