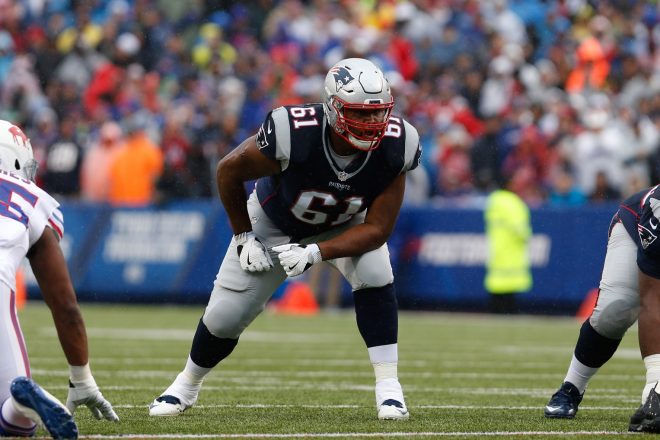 It’s amazing the difference less than a year can make.

For Patriots offensive lineman Marcus Cannon, he’s a player who after New England’s playoff loss in Denver back in January got eviscerated on social media, to the point where his Twitter account disappeared somewhere between then and the beginning of the 2016 season, after struggling to help keep Tom Brady upright against the Broncos.

In that game, the Denver defense hit Brady an astonishing 20 times (NFL scorekeepers later lowered that total to 17) and Cannon took the heat for a lot of it.  He drew the unfortunate assignment of having to deal with Von Miller, who accounted for four of those hits on Brady, along with 2.5 sacks and an interception.

The frustration of knowing that Cannon’s inability to slow down Miller as the Patriots missed out on a trip to the Super Bowl lead to many believing his time in New England might be over, with fans erupting after the game about his play while expressing the fact they felt the team should have spent the offseason prioritizing the position in hopes of finding a replacement.

Now, nearly 10 months later and he’s managed to go from one of the least popular players in the region to one of the most valuable to the people who matter – his teammates and coaches.

As a result, Mike Reiss of ESPN reported on Tuesday that the team rewarded him with a five-year contract extension to keep him around.  The NFL Network’s Ian Rapoport later reported that the deal is worth $32.5 million, with $14.5 million guaranteed.

One man who likely deserves a cut of Cannon’s payday is offensive line coach Dante Scarnecchia, who most certainly has been part of Cannon’s remarkable turnaround. Scarnecchia admitted that the veteran offensive lineman has put in a lot of work to get to this point, and he spoke at length about Cannon during the bye week and the strides he’s made this season.

“The improvement that we’ve noticed really has been in this year,” said Scarnecchia back on November 1st about Cannon. “We asked him to play a different way and to do things differently and he’s such a good guy.  He really tries to do them that way and I think he’s made great strides, I honestly think he has. I think he’s improved over the course of this season, and that’s all you can ask of any player. He’s a big man that moves very well and he uses his hands much better in pass protection. He can be a real force in the run game, so I’m pleased with where he is and neither one of us is satisfied, so we just keep moving forward.”

When asked what the tackle’s problems were, Scarnecchia explained one key thing Cannon wasn’t doing, which he says has been something the veteran has embraced, and it’s served him well.

“He hasn’t used his length,” explained Scarnecchia.  “His arms are really long, but he doesn’t use them like a guy that has long arms needs to use them.  The more you keep defenders out and away from you instead of letting them get in here and get into your body and grab things, the better off you’re going to be at tackle and he has seemed to grasp that very well and embrace it. If he’ll continue to play that way, he’ll be fine.  And he has been fine.”

It’s amazing how far he’s come, and the Patriots are fortunate it worked out that way.  They took a risk in the offseason by not really addressing the position, seemingly gambling on Cannon to fight his way back into the line-up and they must have seen enough over that stretch from him working with Scarnecchia to stick to that plan.  After Sebastian Vollmer started the year on PUP following shoulder surgery and a hip injury, the opportunity was in Cannon’s hands to re-establish himself and he’s made the most of it, which is fortunate since Vollmer ultimately never made it back and ended up on injured reserve.

He’s come a long way and so far he’s been one of the best stories of the season.  Scarnecchia believes he’ll be fine, and hopefully for the Patriots, Cannon’s fine play will continue through the rest of the year.