6 years ago at 9:02 am ET
Follow @bob_george
Posted Under: Patriots Commentary 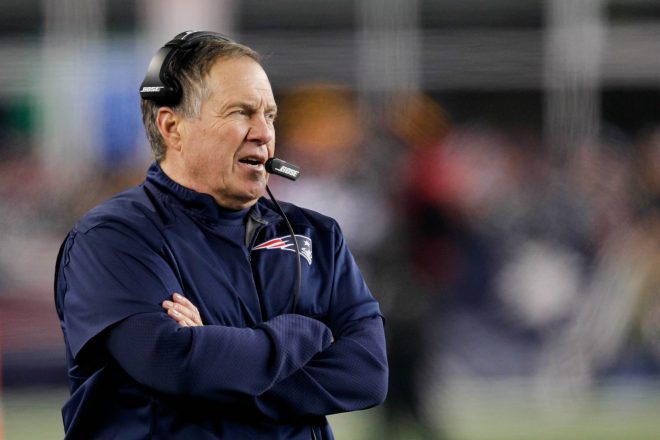 FOXBOROUGH – There is no greater proponent of special teams than Bill Belichick.

He worships punters, so much that in a recent Globe article it was revealed that the coach prefers left footed punters because the reverse spin of the ball induces more muffs. Often times kickoff and punt coverage jobs can make or break careers. Belichick wants you to be able to cover kicks if he feels it will help the team win.

Special teams, the often-overlooked phase of football that truly can win and lose games more than you think, played a major component in the Patriots’ 30-20 victory over the Baltimore Ravens on Monday night at Gillette Stadium. They helped the Patriots build a big lead, and then betrayed the Patriots during a nightmarish stretch in the third quarter which got Baltimore back into the game.

The first blow struck by special teams was after the second Patriot offensive possession in the first quarter. Following a second straight three and out, Ryan Allen punted the ball from the Patriot 43. The ball bounced around the Baltimore 10 yard line with Jonathan Jones and Matthew Slater in hot pursuit. Jones caught up with the ball at about the three and batted the ball backwards before he and the ball entered the end zone. Slater downed the ball at the one.

On the very next play, Kenneth Dixon took a handoff in the end zone, ran towards right tackle, and Malcom Brown smothered him in the end zone for a safety and a 2-0 Patriot lead.

The Patriots got the ball back after the free kick, but despite a 17-yard toss to Martellus Bennett, the drive stalled and Allen punted the ball back to Baltimore. The Ravens drove to the Patriot 16 thanks to a frighteningly anomalous 40-yard dump pass to fullback Justin Juszczyk, followed by a personal foul on Malcolm Butler. Justin Tucker lined up for a 34-yard field goal attempt, but Shea McClellin hurdled the center at just the right time and took the kick right in the gut. The Patriots took over and drove 74 yards in ten plays for a touchdown, a one-yard run by LeGarrette Blount to make it 9-0 Patriots.

The Patriots got that lead thanks to a punt downed at the one and a blocked field goal thanks to a great leaping play. Against the stingiest defense in the NFL, the Patriots could not have been more thankful to their special teams.

The touchdown by Blount was his 14th rushing touchdown of the season, tying the team record set by Curtis Martin.

The Patriots would expand the lead to 16-0 on a Tom Brady pass to Malcolm Mitchell from six yards out, and one possession later seemed poised to make it either 19-0 or 23-0 perched at the Ravens’ 2-yard line. On third and goal, Brady was hurried into a throwaway, but Brady’s awful throw into the end zone was intercepted by Eric Weddle. That turned out to be inconsequential, but on the next drive Tucker did kick a field goal from 50 yards to make it 16-3 Patriots at the half.

A 19-yard scoring toss to Bennett early in the third quarter made it 23-3 Patriots, and they held Baltimore three and out on the ensuing drive. Sam Koch came in and lofted a nice punt towards Cyrus Jones at about the Patriot 20.

The rookie cornerback from Alabama has had problems in punt return packages this year, but was forced to play with Danny Amendola out and Belichick not wanting to use Julian Edelman in there. On this play, Jones let the ball bounce, and the ball glanced off his foot and rolled towards the goal line. Chris Moore, a third string wide receiver, recovered the ball at the Patriot 3. Two plays later, third string tight end Darren Waller caught a 2-yard scoring pass from Joe Flacco.

On the ensuing kickoff, the perennial All-Pro special teams player Matthew Slater took the ball, seeming much safer than Jones handling the ball. But Juszczyk stripped the ball from Slater, and Shareece Wright recovered. Four plays later, Dixon ran a wheel route to the right, Devin McCourty picked the wrong guy to cover, and the wide open Dixon caught the ball and walked in from eight yards out to make it 23-17 Patriots. Baltimore scored two touchdowns in 1:21 and turned a solid Patriot lead into a tight nailbiter.

Beginning with the Jones muff, Baltimore went on a 17-0 scoring run before Brady was able to put the game away with a 79-yard scoring bomb to Chris Hogan, who found himself wide open in the right seam when Weddle covered the wrong man. The Patriots went into a bend-but-don’t-break mode, and allowed only a few harmless field goals to hold on for the win.

Brady wound up with stellar passing numbers in the game, throwing for 406 yards on 25 of 38 passing, three touchdowns and an interception, and a 116.8 passer rating. Edelman had seven catches, Hogan had 129 yards receiving. James White averaged 27 yards per catch on three receptions, helped by a 61-yard catch in the second quarter on a simple slant route.

Flacco threw the ball 52 times, completed 37, for 324 yards, a touchdown and an interception. His passer rating was 92.1.

The Patriots have a short week before heading to their personal house of horrors, Invesco Field to take on the Super Bowl Champion Broncos in Denver. The champs are 8-5 and plagued with inconsistent play all season long, and cannot decide as to who their starting quarterback will be. If the Patriots can somehow stop their annoying habit of bringing their C or D game to Denver, they have a good chance to break through with a rare win in this city. But next game will be very tough for the Patriots nonetheless.

The win, combined with Oakland’s loss last Thursday night at Kansas City, gives the Patriots back the one seed in the conference and the inside track to home field throughout the AFC playoffs. The Patriots missed a chance to clinch the division Monday night with Miami’s win on Sunday at home against Arizona.

Next time you hear Belichick gush about special teams, listen to him and believe him.

And someone please tell Cyrus Jones about Rule #1 in keeping an NFL job, if he still has one tomorrow.

READ NEXT:
Five Things We Learned From Patriots vs Ravens
Posted Under: Patriots Commentary

By: Robert Alvarez
Julian Edelman shares photos from the 2018 AFC Championship game in a 'throwback Thursday" post on Instagram.
12 hours ago

By: Robert Alvarez
Bill O'Brien shares his first comments and reaction in his first interview since becoming the Patriots' new offensive coordinator.
13 hours ago