6 years ago at 10:00 am ET
Follow @SteveB7SFG
Posted Under: Patriots Commentary 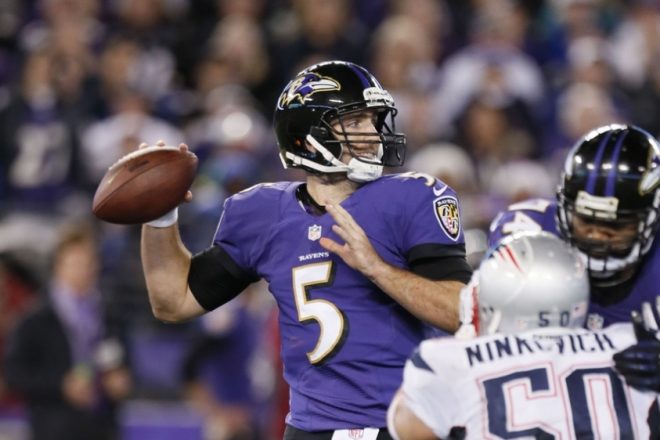 Baltimore Will Go As Far As Defense, Flacco Can Take Them

The Patriots finish a two-game home stand when they face the Baltimore Ravens on Monday Night Football. The kickoff is scheduled for 8:30 p.m.

The Patriots (10-2), defeated the Rams 26-10 on Sunday. Tom Brady notched career win number 201 putting him alone at the top of all QBs. The defense held LA to under 100 yards of offense until the final two minutes of the game. LeGarrette Blount also scored his NFL-leading 13th rushing touchdown on the Patriots first drive.

The Patriots increased their lead in the division over the 7-5 Miami Dolphins to three games with the Ravens win over the Fins. The Patriots are still tied with Oakland with the best record in the AFC but the tiebreaker goes back to Oakland this week.

The Ravens (7-5), are getting healthy and not coincidentally are playing their best football of the season now. They are locked in a struggle with the Steelers for the AFC North divisional lead. Baltimore throttled Miami 38-6 on Sunday. Joe Flacco threw for 386 yards and four touchdowns and the defense frustrated Miami all day long. The Ravens snapped Miami’s six-game winning streak.

Here are our Five First Impressions of the Ravens:

Ravens Have Talented Trio of Targets in the Passing Game: Baltimore has been productive in the passing game. Joe Flacco has had his struggles this season at times, but with the offensive line coming together, he’s a battle-tested upper tier QB who can produce in the playoffs. And his top three targets will bear watching on Monday.

Flacco has spread the ball around and has hit six receivers with 20+ catches on the season but the big three of Mike Wallace, Steve Smith, and Dennis Pitta will get the most of the looks. They’re a veteran group of receivers that are coming together and will be a tough matchup for the Patriots secondary.

Wallace has been the deep threat with 57 catches for 851 yards and 4 touchdowns. He seems to have found a new lease on life with the Ravens. Steve Smith works both out of the slot and outside and is still a tough cover even at the ripe old age of 37. The five-time Pro Bowler has 54 catches for 589 yards and three touchdowns.

Pitta suffered a serious hip injury and was there was thought that his career might be over after missing most of the past two seasons. He’s found his groove again and has hauled in 61 passes for 529 yards and two touchdowns. He scored both against Miami last week, his first since December of 2013.

This team with their defense will go as far as Flacco can carry them. While he isn’t the demonstrative type and was called out by former teammate Ray Lewis, his calm demeanor is what wins for him in the playoffs. He never gets flustered.

Defense Never Rests With Dean Pees: The Ravens always have one of the top defenses in the league and this year’s group is no exception. They are the best in the league at stopping the run allowing just 73.4 yards per game and only 3.4 yards per rush. Their front seven is big and physical and they play with that type of physicality every game. The Ravens and the Patriots are tied, allowing the second least points in the NFL with 207.

The defense is led by another greybeard Terrell Suggs who is still producing at a fantastic rate at the age of 34. T-Sizzle has no love for the Patriots or Tom Brady but with eight sacks on the year, he’s still a force to be reckoned with on the edge. He and Elvis Dumervil give the Ravens the edge rushers that can turn a game.

Pees, the defensive coordinator held a similar position here in New England and knows the Patriots offense and Brady well. He’s very aggressive and look for the Ravens to play a tight zone on early downs to take away the short area, especially in the middle of the field. And they like to blitz up the A-gaps on obvious passing downs.

Running Game Has Struggled: The Ravens running game has been stuck in neutral all season. One of the reason’s their offense has struggled to score points is the lack of the running game, especially in the red zone. Baltimore is averaging just 89.7 yards per game and 3.7 yards per rush. Far below what we’ve come to expect from them.

Their 28th-ranked running game is led by Terrance West with 163 carries for 650 yards, and 5 touchdowns. The change of pace back is rookie Kenneth Dixon who we liked during the draft process this season. He’s rushed for 206 yards on 46 carries and he’s added 18 catches for 100 yards receiving.

With the offensive line getting healthy and coming together (more about that below), however, they’ve averaged 101 yards per game the past three weeks. That fact may show that they’re turning the corner on things and may have a much more effective running game this week.

Ravens OL Is Healthy and Gelling Now: The Ravens struggled to protect Joe Flacco for much of 2016 and haven’t been able to generate anything consistent in the running game. The health of the offensive line and having multiple players miss games had a lot to do with it. But this unit is getting healthy at just the right time and their play has gelled the past few weeks.

It starts up front with Ronnie Stanley.  He missed four games with a foot injury and Baltimore lost all four of those games. But the rookie tackle who was the Ravens top pick in the 2016 NFL Draft, (#6 overall), has really improved his technique as he’s adapted well to the pro game. After being beaten for sacks and drawing too many penalties, he’s adapted.

Marshall Yanda flipped from RG to LG and is teaming with Stanley to play exceptionally well. Jeremy Zuttah at center has been solid all season. On the right side, the Ravens have gotten much better play out of former Jet Vlad Ducasse and RT Rick Wagner than anyone could have foreseen.

Facing a tough Miami front seven, Flacco wasn’t sacked once and had just two QB hits for the entire game.

No Love Lost Here, Expect Playoff Atmosphere: No team other than the Steelers brings out the intensity of Baltimore than the Patriots. The games are always a physical, tough matchup and the teams seem to genuinely dislike one another.

The rivalry is an under-the-radar one and with a national stage on Monday Night Football, this one will have an intensity that will be a possible preview for another matchup in the postseason.

The Ravens need this game to stave off the Steelers in the division. The Patriots are trying to keep pace with Oakland for the overall #1 seed in the AFC. The teams have met four times in the post-season and are 2-2. But the most recent one in 2014 was perhaps the best game of all. Twice the Patriots fought back from 14-point deficits and are remembered for the double pass by Julian Edelman and the eligible/ineligible offensive linemen rotation that confused and irritated Baltimore to the extent that they had the rule changed the next offseason.