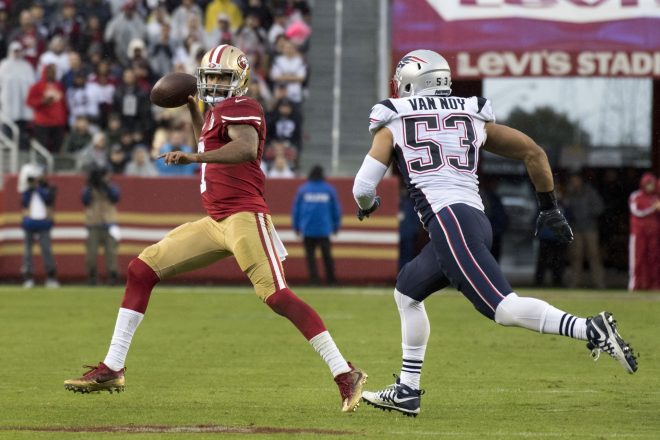 Patriots, Brady Take Care of Business on the Road

The Patriots were coming off a disappointing loss on SNF against the Seahawks and were looking to rebound against a bad 49ers team. They accomplished their goal, pulling away for a 30-17 win and moving on to a 5-0 road record and 8-2 on the season.

Tom Brady and Julian Edelman were making their returns to the Bay Area of San Francisco where they grew up and playing in front of friends and family. The crowd also had a large contingent of Patriots fans who made the trip out west and negated the home field advantage for the Niners.

The Patriots ultimately left some points on the field and the defense, while still not great was better. Bill Belichick and Matt Patricia actually did some self-scouting during the game by tinkering with different players and combinations.

Quarterback: A-
Tom Brady continues to play at an incredible level at the ripe old age of 39. His movement in the pocket and innate ability to feel pressure and slide away from it are incredible. He’ll never be confused with the mobile QBs like Wilson or even Kaepernick, but his ability to move was a big factor in Sunday’s win.

For the 21st time in his HOF career, Brady threw for 4 touchdowns and zero interceptions. He finished 24 of 40 for 280 yards with the four scoring throws. And when the team needed it at crunch time, he stepped up, put the team on his back and played outstanding down the stretch.

If there was one issue, it was he was trying to overfeed Edelman on the day, especially with the deep ball throws that just weren’t working. But a combination of no Rob Gronkowski, no Chris Hogan, and a wet ball in sometimes pouring rain will do that.

Running Backs: A
LeGarrette Blount had a very strong game 124 yards on 19 carries (6.5 yard average) and did just what the Patriots needed out of him on Sunday. He had a really nice 35-yard touchdown run called back [correctly] on a Nate Solder hold. And nearly scored again on the Patriots final, clock-killing drive. Blount is having a terrific season, he’s rushed 201 times for 802 yards and 12 touchdowns. I’d have taken that for the year, never mind just 10 games in.

Dion Lewis made his return to the field and it was nice to see that Brady went to him right away to get his feet wet. He showed some of that elusiveness that made him a household name last year. He carried the ball five times for 23 yards and added three catches for 26 more. It was a very nice debut after missing an entire year.

James White once again had a big game out of the backfield with six catches for 63 yards, including a nice touchdown reception from Brady. Josh McDaniels experimented with both he and Lewis in the backfield and that will prove to be an intriguing pair. James Develin was as solid as always in the power run blocking department, opening holes for Blount to reach the second level.

Wide Receivers: B+
The Patriots were missing Chris Hogan on Sunday, figuratively and literally. With the Niners’ defense trying to take away the short, middle area of the field away, Brady was attempting to make those deep sidelines throws where Hogan has excelled this season.

Julian Edelman was targeted 17 times and the toughest, little-big man made eight catches for 77 yards including a nice touchdown where he just got his feet inbounds. He was frequently open on the deep routes but the timing between he and Brady was just a tad off, which the weather might have been a factor.

Malcolm Mitchell got extended reps with Hogan absent and had his best day as a pro with four catches for 98 yards including his first NFL touchdown, a 56-yard strike from Brady in the fourth quarter. The adage that the Pats can’t develop wide receivers? Mitchell may break the mold there.

Tight Ends: B
With no Gronk on Sunday, the 49ers made their priority to stop Martellus Bennett and rolled their coverages into the middle of the field where the tight ends normally work.  Bennett was targeted just twice and made a single catch for 14 yards which was a bit disappointing. But his being blanketed, opened areas for others to operate in, and the Patriots have plenty of weapons for Brady to use.

His blocking in the running game, as usual, was solid. What a steal his pickup has been this season.

Offensive Line: B+
The offensive line had a good day overall. They opened holes for the running game which rolled for 171 yards on the day. Nate Solder had a drive killer where he was flagged for holding on a Blount 35-yard touchdown run. He also had some issues with the Niners young edge rusher Eli Harrold at times. Brady faced some pressure from the edges during this game but could step or slide in the pocket.

Marcus Cannon gave up a sack to DeForrest Buckner, but late in the game, the Patriots ran behind him and Shaq Mason on the right side. They did a fantastic job of creating some seams for the backs to exploit.

Defensive Line: B-
The Patriots defensive line had an uneven game on Sunday.  They allowed too many yards in the running game but were able to generate some more pressure on the QB as the “scheme” was a bit more aggressive this week. They got good games out of Chris Long, Rob Ninkovich and Trey Flowers on the edge but interior players Alan Branch, Malcom Brown and Vincent Valentine didn’t do well enough tying up the 49ers running game.

Due to the play of the DL, however, they generated five sacks as a team, which for a unit that had only generated 16 on the season was a good development.

They left behind Jabaal Sheard this week after he played very little against the Seahawks and facing a tough ground game against the Niners and the Jets upcoming, it will be interesting to see how this scenario plays out.

Linebackers: B-
The Patriots did some serious mixing and matching at linebacker on Sunday as they did some self-scouting during game action. There was good and bad throughout this contest as they got sacks from Dont’a Hightower on a perfectly timed A-gap blitz and from newcomer Kyle Van Noy who flashed a bit of potential on a blitz from the edge.

Covering running backs continues to be a woe, Hightower was caught in the wash of a bunch formation on one play and Elandon Roberts was taken to task on another. He continues to struggle in coverage and will be picked on until he improves his coverage skills against both RBs and TEs.

The Patriots rested Hightower for a series and the combination of Roberts and Shea McClellin were pushed around on the inside. Van Noy had issues lining up correctly a few times and got barked at by Hightower. There was even a Barkevious Mingo sighting on defense (gasp!), as he got some late work in.

Van Noy shows some promise as a blitzer, I for one would like to see Mingo get some work in coverage….

Secondary: B
The Patriots secondary had a good overall effort in the game on Sunday. While no one will confuse the 49ers air attack with that of Pittsburgh, there were some positives to take away. Especially after that debacle the week before against Seattle. At one point Kaepernick had 10 straight incompletions.

The team went with Malcolm Butler and Eric Rowe outside and moved Logan Ryan to the slot. Butler had his typical excellent game outside. He got a sack on Kaepernick as he is really doing it all. Rowe had a nice pass breakup where he turned his head just in time to knock the ball away.

Ryan had the biggest bounce back this week. He was tasked with covering slot receiver Jeremy Kerley for the most part and did an outstanding job. Kerley was the 49ers leading WR heading into the game and was targeted six times for zero catches.

Pat Chung was moved back to a position of strength in the Patriots “Big Nickel” defense and had a sack and played much better. He got beat in coverage by Vance McDonald, as did Devin McCourty but overall the results were much better.

Special Teams: C
The Patriots Special Teams had a largely unmemorable day. With the weather conditions across the NFL plaguing extra points, Stephen Gostkowski pushed his first attempt to the right for the 11th miss of the day. But after that, he made the next three and added a 38-yard field goal.

Ryan Allen had two substandard punts early in the game and could only hit one inside the 20. On the plus side, despite the less-than-ideal weather conditions, Cyrus Jones did a solid job of fielding the ball on his punts and the coverage units were solid.

Danny Amendola jump-started the offense with a 30-yard punt return to open the game for the Pats which led to the first touchdown.

Coaches: B+
The Patriots shook off their loss to the Seahawks and were able to put together a better effort against admittedly a bad 49ers team. While they let the Niners hang around until the 4th quarter, one never had the feeling that the game could slip away.

Matt Patricia dialed up some pressure this week and mixed things up. Just last week, my Patriots 4th & 2 podcast co-host, Russ Goldman and I were discussing when the last time we saw a safety blitz and behold Pat Chung blitzed … twice on the game’s first series. The result saw the Patriots notch five sacks and one can expect that to continue as they will now face some less mobile QBs. It wasn’t perfect by any means on the defensive side, but it was better.

Josh McDaniels had to deal with no Gronk or Hogan but still the offense put up 30 points. Granted they could have easily had 14 more but the feeling is, this offense SHOULD be putting up those numbers against a team like SF. The play calling, specifically the constant deep chunk plays to Edelman were a head-scratcher. Why didn’t they use Mitchell more? Especially after he showed that he can produce.

Bill Belichick always has a few surprises for us and this week was no exception, given that they left Sheard at home. But the results are proof that his system works. With the win yesterday the Patriots ensured a .500 record …or better for the 16th year in a row. No other coach can boast that in today’s NFL.