6 years ago at 8:54 am ET
Follow @IanLogue
Posted Under: Uncategorized 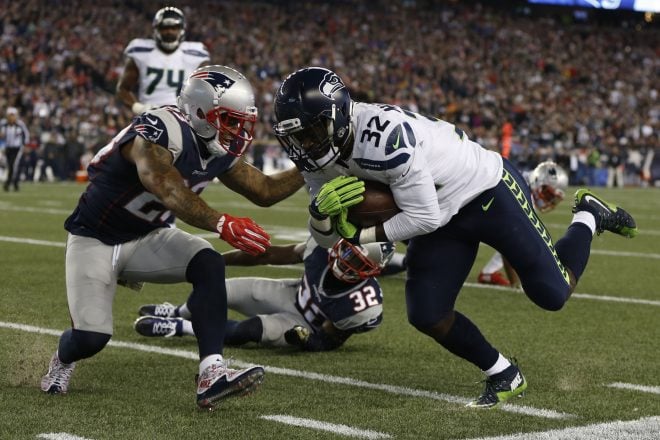 It was a tough loss for the Patriots on Sunday night, as New England lost their second game of the season after falling 31-24 to the Seahawks at Gillette Stadium.  It’s also the first time since 2012 that the Patriots lost twice at home in the same season, as well as the first defeat for Tom Brady since coming back from his suspension.

There were a variety of things that went wrong Sunday night, and here’s a quick look at some things to take away from this one.

1) Third down defense was bad – The Patriots did a relatively decent job against the Seahawks on third down after holding them to 6-of-12 (50%) on the night, but one of the most frustrating parts of this one was the fact that they didn’t do a great job of making a play when they needed to, especially when they had them in long-yardage situations.

Breaking it down, here’s a closer look at what they faced Sunday night and how they fared:

Of the six completions the Seahawks had, five of them went for 14-yards or more, include two of over 20.  That’s unbelievable.

To take it a step further, the above basically breaks down like this:

The fact that they struggled stopping them when they had them in longer situations was frustrating, and obviously played a big part in the loss.

2) No real shock in the final play of the game – Rob Gronkowski drew two penalties early on in this one, including a pass interference and a defensive holding penalty in the first half and you could almost tell that down in the red area late in the game, he probably wasn’t going to get a third.

His final attempt looked eerily similar to the one they called the first time, with Gronkowski running right at the defender and unfortunately it was one of those plays that probably could have gone either way.  The bigger issue was really the placement of the ball, which had Brady thrown it a little more outside instead of deeper toward the corner, Gronk may have possibly had a shot at making a play on it. But after getting locked up, Gronk had no shot as the ball glanced off his fingers and he found himself kneeling on the ground looking for a flag that didn’t come.

However, as far as the last play goes, there’s probably no doubt the fact the officials had already made several calls in his favor (including overturning an initial fumble ruling) likely played a factor in that final no call.  Gronkowski made no excuses at the end of the game, nor should he.  They lost this one primarily because they couldn’t stop the Seahawks all night and hopefully it’s a wake-up call for a defense that definitely didn’t play their best football. 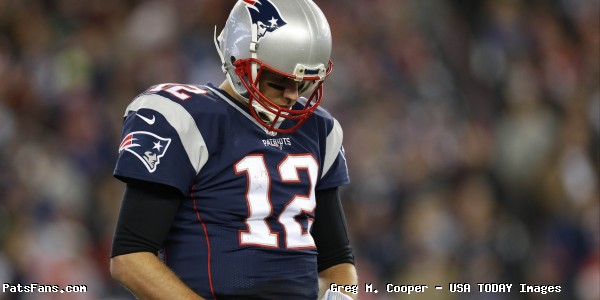 Brady suffered his first loss since coming back as a starter Sunday night.

3) Turnovers were a problem – The Patriots needed to play mistake-free football Sunday night in order to beat a tough Seattle defense and unfortunately, they made a couple of key mistakes that ultimately cost them the football game.

One of the more egregious miscues came early in the second quarter moments after they avoided one.  Not even two plays after the Patriots caught a break after the officials overturned an apparent fumble by Gronkowski that the Seahawks recovered, Brady made a questionable throw on a first down play where Seattle managed to get pressure on him and he made an uncharacteristically bad decision.  After shuffling around in the pocket trying to avoid defenders, Brady heaved the ball down the field to a double-covered Malcom Mitchell and the ball was picked off.

That turnover was significant because it happened after Seattle had scored and had taken the lead at 12-7, which prevented the Patriots from having an opportunity to answer.

But the worst miscue came in the fourth quarter following a 23-yard field goal to put Seattle back on top at 25-24 with 8:56 to go in the game.  On their second play from scrimmage, Brady completed a pass to Edelman where the veteran receiver didn’t get down and while trying to fight for extra yardage, had the ball stripped out.

The Seahawks turned around and drove down for a touchdown, which completely changed the tone of the game.  Mistakes will cost you against good teams, and that’s exactly what unfortunately happened Sunday night.

4) Blount Rushed For Some tough yards – As easy as it would have been to abandon the run and start throwing the football, New England’s decision to stick with feeding LeGarrette Blount the ball was certainly one of the big things that helped keep them in the game.

Blount finished the night rushing for 69-yards on 21 carries along with three touchdowns, which helped keep the Seahawks off of Brady enough for the veteran to throw for 316 yards.

Overall Seattle definitely made life difficult for Brady, forcing him to move around in the pocket along with bringing him down twice while hitting him four times. The 39-year old quarterback will likely be sore this week after Kam Chancellor drove his helmet right into Brady’s right leg, striking him just above his knee and completely upending him.  Brady was wincing in pain after the hit and admitted after the game he was pretty sore from the play.  However, it’s safe to say without a productive night from Blount, things probably would have been a lot worse.

5) It wasn’t all bad – There were some bright spots in this game, which came down the stretch and saw the Patriots convert some difficult 3rd downs, including a 3rd-and-25 where Brady threw a perfect pass to Edelman, dropping it in perfectly for a 33-yard play that lead to a field goal which, at the time, put them up 24-22.  He also hit another big one to Edelman on a 3rd-and-10 for 30-yards on their final possession that put them in position to even have a shot at this one.

They’ll walk away frustrated with the plays they didn’t make but it’s games like this that will make them better in January.  They can also take some solace in the fact that this will go down as a non-conference loss and at least shouldn’t play a factor in any tie-breakers. After all is said and done, hopefully they’ll be able to look back at this game as simply a learning experience to help them get better over the final half of the season.

For now, they’ll spend this week trying to put this one behind them before they turn the page to San Francisco, where they’ll travel next Sunday when they take on the 49ers.