6 years ago at 8:36 am ET
Follow @bob_george
Posted Under: Patriots Commentary 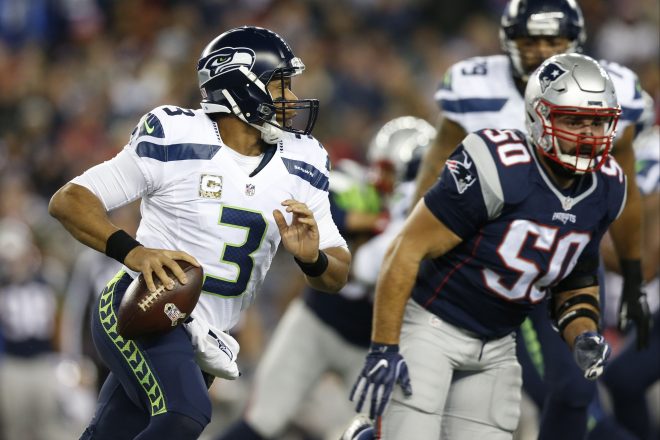 FOXBOROUGH – No doubt about it, you want Bill Belichick and you don’t want Pete Carroll.

Carroll proved that point once again on Sunday night at Gillette Stadium. After scoring a late touchdown to make it 31-24 Seattle, Carroll inexplicably went for a two-point conversion. Russell Wilson overthrew Doug Baldwin in the end zone, and the Patriots had to overcome only a 7-point deficit with two and a half minutes left. The Patriots were looking at a more certain overtime, needing only seven points to tie instead of eight.

Fortunately for Carroll, his defense made plays when it had to, the out of sorts Patriots did not, and the Seahawks exacted revenge over the Patriots from Super Bowl XLIX, holding on for a 31-24 win. The Patriots gagged at the finish, failing to score with first and goal at the Seattle two-yard line thanks to uncharacteristic bad execution and questionable play calling.

The real culprit for the Patriots was the defense, which really needs to get away from their “bend but don’t break” philosophy. The Patriots gave up way too much yardage with their soft zone coverage, designed to prevent touchdowns and give up field goals. Wilson was able to easily move the Seahawk offense up and down the field, enhanced by some efficient rushing by rookie running back C.J. Prosise. The two teams had a nice seesaw battle for most of the game, but most pregame prognosticators predicted an easy Patriot win, not a seesaw battle they would eventually lose.

Following the missed two-point conversion, Tom Brady took over at the 25-yard line and found a rhythm. He made two clutch throws, a 29-yard beauty to Julian Edelman on third down and 10, and then a 25-yard lob pass to Rob Gronkowski which put the Patriots at the two-yard line with 30 seconds left. Edelman was covered by Richard Sherman, and Brady was able to float a lob pass that managed to beat the All-Pro cornerback.

On first down and goal from the two, Brady sneaked to the one, forcing Seattle to burn its final timeout with Carroll obviously hoping Seattle would get the ball back with time to kick a game-winning field goal. LeGarrette Blount was stuffed at the goal line on second down. On third down, Brady tried to sneak it in but fumbled the snap. He was able to recover the ball, but lost a yard in the process. On fourth down, the Patriots got that yard back when Seattle was called for 12 men on the field.

Back to the one-yard line, with 14 seconds and one last play left, Brady called for a fade pass in the left corner of the end zone to Gronkowski. The plan was for Gronkowski to outjump the defender for the ball. Kam Chancellor was draped all over Gronkowski, and appeared to have his hands in Gronk’s face. He was knocked off balance as the ball sailed over his head, ending the last chance the Patriots had to win the game.

Those experts who say that the Patriots should have tried to run the ball in again can have their say, but the Patriots failed on those two common “must score” plays (Blount dive, Brady sneak) on second and third down. Against a great defense like Seattle’s, something different had to be tried. One might wonder, however, if the fade pass, which is a tricky pass to throw and has to be perfect literally every time, was the best option. At the one yard line, pick plays won’t get called for offensive pass interference. A play fake to Blount might have produced an open receiver. Then again, if Brady had thrown a goal line interception, against Seattle, of all teams, one can imagine the comparisons to the Super Bowl of two years ago.

A greater source of second-guessing might be directed at Jamie Collins, who was traded two weeks ago to Cleveland at the trade deadline. The reports say that Collins was freelancing, and not really with the program anymore. Many experts out there are going to assume that Collins’ absence was the main reason that Prosise was able to gash the Patriot defense. Prosise finished with 66 yards rushing on 17 carries, but was the team leader in pass catches and receiving yards (seven catches, 87 yards). Collins was a substandard pass defender, and that 36-yard fourth quarter pass he hauled in was defended by Elandon Roberts, Collins’ replacement. Prosise and Christine Michael both averaged around four yards per carry, so Collins was perhaps missed in this area.

The real problem for the Patriot defense is their conservative approach in general, with soft coverage and a tepid pass rush. Wilson finished with 348 yards passing on 25 of 37 passing, three touchdowns and a 124.6 rating. With a patchwork young offensive line, these numbers are unacceptable. Wilson is one of the league’s best quarterbacks, but Wilson’s main skills center around his running ability, not his arm. Wilson has been hurt most all season long, and the Patriot defense was not expected to be shredded by him. Yet Wilson consistently made good to exceptional throws all game long, basically because Logan Ryan and Malcolm Butler played off the receivers, as they have done most of the season, and surrender far too much yardage underneath.

The Seahawks finished the game with 420 yards of team offense.

On the final play of the first half, Wilson rolled left, found nothing, then threw back across the field. Standing at the goal line with no one near him was Baldwin, who caught the pass for a 19-yard touchdown. Ryan was the nearest defender and failed to account for him when Wilson rolled left. Failures like this have plagued the Patriots all season long, but this was one game where Brady and the offense couldn’t rescue them.

Brady was 23 of 32 for 316 yards, threw one interception (the first of the season by a Patriot quarterback), no touchdowns, and a 90.1 rating. Blount scored all three Patriot touchdowns, giving him 12 touchdowns for the year and bringing him to within two TDs of the single season Patriot record for touchdowns in a season, done twice by Curtis Martin. Blount had 69 yards on 21 carries.

Bill Belichick had two weeks to prepare for the Seahawks, the game was at home and not at the home of the 12th man, and Seattle still won the game. Carroll, making his first trip to Foxborough since being fired at the end of the 1999 season, walks off the field victorious over his coaching successor.

Peyton Manning has now retired. The NFL may want these two teams to play every year. This is now the marquee NFL matchup.

READ NEXT:
Five Things We Learned From Patriots vs Seahawks
Posted Under: Patriots Commentary