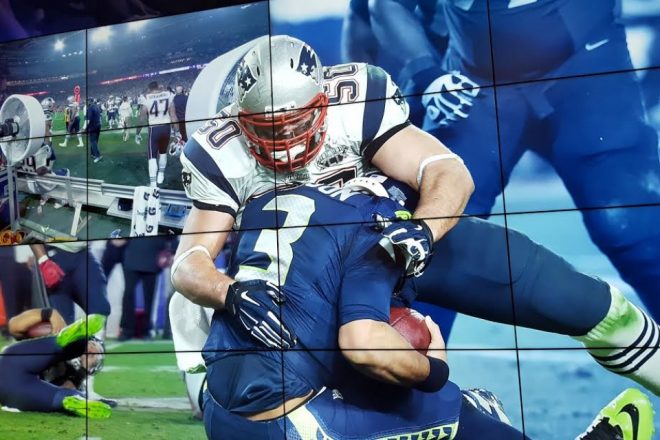 NFL Week Ten is highlighted by a rematch of Super Bowl 49. On Sunday night the 7-1 New England Patriots host the 4-2-1 Seattle Seahawks on NBC. Al Michaels (play by play), Cris Collinsworth (commentary) and Michele Tafoya (sideline reports) will serve as the broadcasting crew.

On the Sunday afternoon undercard there are several interesting games worth tuning in to view. CBS has the single game and most of their affiliates will be broadcasting Denver at New Orleans in the early time slot. Oakland was able to neutralize Von Miller and the vaunted Denver pass rush last night en route to a 30-20 victory. The defending Super Bowl champs have now lost three of their last five games. The Broncos have lost their last two road games and suddenly find themselves in third place in the AFC West.

Fox has the doubleheader this week and their early time slot is primarily split between two games. Most of the northeast and southeast will receive Atlanta at Philadelphia. The Falcons own the second best record in the NFC but face the challenge of going out and winning on the road for the second time in two weeks. Philadelphia has stumbled recently with four losses in their last five games, but the Eagles are 3-0 at home this year.

The other early game on Fox receiving wide distribution is Green Bay at Tennessee. The Packers look to rebound after a lackluster performance in their Sunday night loss to the Colts. This game will air through much of the north central United States as well as almost all of the Rocky Mountain and Pacific time zones.

In the late time slot Fox is once again showcasing the Dallas Cowboys. This week Dallas is at Pittsburgh, which makes for a compelling matchup. The Steelers have lost three in a row but perform much better at home with the backing of Steeler Nation and their Terrible Towels. Pittsburgh’s sole home loss this year was without Ben Roethlisberger as well as a depleted wide receiving corps against the New England Patriots.

Thursday night brings us yet another stinkfest, with the Browns traveling to Baltimore to face the Ravens. The final prime time game on Monday is between the Bengals and Giants. Buffalo, Detroit, Indianapolis and Oakland are all off with byes in Week 10. Please keep in mind that the listings below are preliminary. Some stations will switch to another game between now and Sunday.

★★★★ 6-3 Denver Broncos at 4-4 New Orleans Saints
Sunday, November 13 at 1:00 pm ET on CBS; Jim Nantz, Phil Simms and Tracy Wolfson
Saints -1½ . . . . over/under 49
Broadcast in all markets with the exception of those broadcasting one of the three other CBS games: Houston-Jacksonville, Kansas City-Carolina and Miami-San Diego.