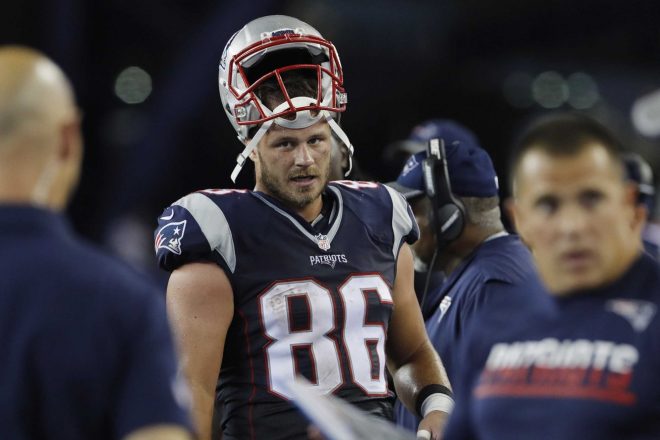 It’s not very often that there’s reason to question Bill Belichick, but Tuesday’s bizarre move to jettison A.J. Derby to an AFC rival while weakening his depth chart is certainly puzzling.

To make matters worse, the team reportedly made the trade with the Denver Broncos, sending the third string tight end to Denver in exchange for a fifth-round draft choice.

That’s it. Nothing else.

It’s not very often that the front office gets it wrong when it comes to making in-season trade deals, but it’s hard to understand the reasoning behind this one. For the first time in years, the Patriots had headed into 2016 with terrific depth at the tight end position and this now nullifies that, leaving them with virtually no margin for error for the rest of the season. With Rob Gronkowski and Martellus Bennett as the two starters, they at least had Derby as their third-string tight end, which given his preseason performance, didn’t seem too bad. Derby had a strong preseason, finishing with a team-best 15 receptions for 189 yards and a touchdown. He showed terrific quickness and athleticism along with great hands, with a similar playing style to Buffalo’s Nick O’Leary.

His emergence during the preseason was big, especially after the team eventually opted to release Clay Harbor earlier this month. That was telling and seemed to indicate that it appeared that the Patriots felt pretty good about the young, talented player they could now develop behind Gronkowski and Bennett.

He showed a lot of potential and with Gronk and Bennett ahead of him, they already have a starting duo that seems to be their best ever. With Derby, they seemed to even have arguably their best third tight end, rounding out a pretty talented trio at that position.

More importantly, it left them with at least a relatively viable option in the event either Bennett or Gronkowski suffered an injury. Now that he’s been sent off to Denver, playing for a team that could potentially be a threat to New England in the postseason, the Patriots don’t have a real insurance policy behind either of those two veterans.

It’s very un-Belichick-like, and goes against his philosophy of trying to maximize each deal while not hurting his club. Making a trade for a player to help them now would have made sense, as those in-season deals have historically made a difference and they made another deal Tuesday to acquire Kyle Van Noy from the Lions, who helps their depth at linebacker.

That deal makes some sense. But getting just a 5th-rounder for Derby, at least at this point in the 2016 season, doesn’t seem like one that was necessary or wise since it makes the Broncos better.

Denver expects Derby to help them immediately, so they’re thrilled with the deal, which makes it entirely more frustrating. Helping to strengthen a potential AFC playoff opponent, as well as weakening the depth chart at a position that he values so much, makes it even tougher to wrap your head around.

Don’t get me wrong, they caught Denver in a moment of weakness and got a pick at this point of the year that they might not have gotten after the season. Unless of course, Gronkowski or Bennett got injured and Derby had come in and played well and raised his stock that way. But that scenario at least protected the Patriots since they would have been the ones to potentially benefit in the form of wins. Given this club’s history, the “next-man-up” philosophy is one we’ve grown accustomed to and seeing Derby thrive and grow in that situation would have at least made up for the loss of either player.

Instead, Belichick seems to be comfortable rolling the dice that they’ll have both players for their remaining nine games and beyond. It’s a bold move, and hopefully the fifth-round pick they’ll make next spring, likely later in the round given the run Denver appears to be on, will make it worth it. Hopefully, there’s still a move in the works, or at least a plan, to bolster the depth chart. The only question then will be whether or not it’s an adequate replacement for who they just gave up.

For now, this will simply go down as a move where we’re left with far more questions than answers. For a coach who loves tight ends and loves depth, after Tuesday’s move, the Patriots are now left with less of both.