6 years ago at 6:30 am ET
Follow @AllThingsPats
Posted Under: Patriots News 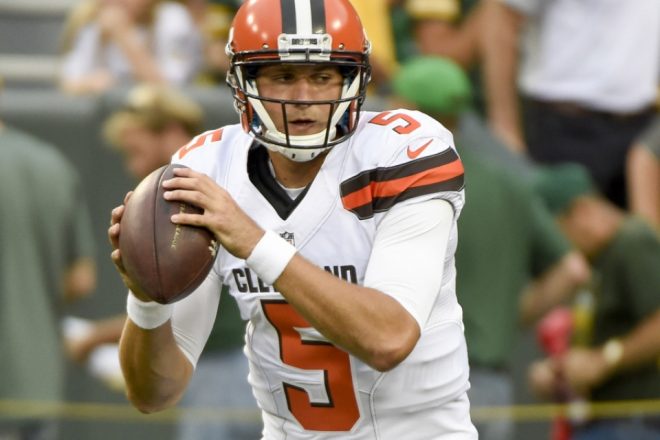 Here is a quick look at reactions from Cleveland and around the rest of the NFL to the New England Patriots 33-13 win over the Browns.

First off a few thoughts from the Cleveland Plain Dealer.

Quarterback isn’t a problem for the Patriots: Tom Brady returned after a four-game suspension and looked real rusty: 28-for-40, 406 yards, three touchdowns. He earned an “A” grade from the Plain Dealer’s Dennis Manoloff and the envy of Hue Jackson. Doug Lesmerises of cleveland.com says Brady is so good he would be successful on the Browns:

With fans wondering if the Browns are headed toward their worst season, they couldn’t ruin Brady. He may not have won four Super Bowls, but a quarterback that skilled, with an unshakable ego that big, who demands so much of himself and his teams, wouldn’t have been taken down by some bad organizational history.

You're our only hope at quarterback, Uncle Rico. #Browns pic.twitter.com/RycsCcH85s

Even the Browns couldn’t have ruined Tom Brady

Would Brady have been Brady anywhere, even Cleveland? Yes. It’s Brady. It’s the quarterback, not the franchise.

“Everyone wants that kind of relationship with their quarterback and their head coach and they want that success,” Jackson said this week. “We’re all envious of what they have. I know I am.

“Someday I hope to have a relationship like that with our quarterback and have our organization hoist that trophy someday.”

At the moment, after the Browns’ 33-13 loss dropped them to 0-5, it’s hard to decipher what seems more unlikely, a Jackson 17-year relationship with a quarterback or the Browns with a Super Bowl trophy.

Meanwhile, Brady treated the Browns secondary like he was imagining Roger Goodell inside each orange helmet.

Only one grade assigned: Brady, returning from the four-game Deflategate suspension, earned the most solid ‘A’ possible. On the Browns — and numerous other teams — it would have been an A+. Brady is such a perfectionist, he probably never would give himself an A+.

I know we knew this before the season, but the Patriots are going to be absurd in the red zone with Gronk and Martellus Bennett.

Now it’s time for one of the NFL’s most intense competitors to embark on a revenge tour, and the winless Browns just happened to find themselves witness to the opening act. A week after being shut out by the Buffalo Bills, the Patriots flowed with the stoked tone set by their leader.

Cleveland was just the first stop of Brady’s revenge tour.

But it may wind up on a Super Bowl stage.

Vengeance. Sheer talent. Both. Brady effortlessly delivered a 406-yard, three touchdown performance in a rout of Cleveland, and the rest of the NFL is officially on notice.

Chris Hogan isn’t sure if people consider him a deep threat. After his performance against the Cleveland Browns on Sunday, that likely changed.

The wide receiver toasted the Browns’ secondary for multiple big gains en route to the most productive game of his career. Hogan finished with four catches and a game-high 114 receiving yards.

“I’m having a lot of fun,” Hogan said. “I’m enjoying playing on this team with these guys. Really makes it, winning changes things and makes it a lot of fun. All in all this whole team is fun to be around and fun to play with.”

With Brady back under center, whole different story for the #Patriots O. So many diff options. Specific identity probably month+ away #Toys pic.twitter.com/wFfGqrHInj

Having a motivated Brady is one thing. Having two tight ends nearly impossible to cover is quite another.

“When we’re both open, it’s pick you poison,” Bennett said. “I try to out-run him and sometimes I’m like, ‘I’m getting open first.’ It’s like a race to see who can get open. But some of them, I’m supposed to be more patient and create more layers in the defense. It’s just a little bit different each time. We’re just trying to get up the field and make plays. He’s going to do what he does, like you saw when he broke all those tackles. ‘Gronk’s back – let’s go.’ It’s just fun being out there with the guys.”

The best part of watching Sunday was seeing the best and most important player in the league back on the field. The best part of the rest of the season will be watching just how Brady keeps his two bookend tight ends happy.

Brady, Gronk and Bennett – sounds like an unbeatable superhero team.

WEEI: Rob Ninkovich happy to be away from diapers at home, helps Pats D dispose of Browns

Rob Ninkovich was back on the field with one tackle and a near-interception in a 33-13 win.

“I missed it a lot. I was ready to stop changing diapers and get back to football,” Ninkovich said. “My wife put me to work there. Just really happy to be back, happy to just come into work and just practice, little things that you miss out on. Super-pumped to back and look forward to this coming week.”

“It felt good. I hadn’t tackled anyone since the AFC Championship Game so it felt good and my arm feels good,”

The margin of New England’s 33-13 victory illuminated just how much the Patriots had missed Brady, regardless of how they had fared in his absence.

Brady inherited a team that went 3-1 during his suspension, and that success fueled a perception that he, to some degree, was a product of Coach Bill Belichick’s genius, and that quarterbacks were interchangeable within an organizational machinery that squeezed multiple victories from a backup, Jimmy Garoppolo, and a third-string rookie, Jacoby Brissett.

Under Brady, though, the offense gained more yards in the first half on Sunday — 321 — than it did in all of last week’s game, a shutout loss to Buffalo. Brady maximized Rob Gronkowski’s coverage mismatches to facilitate yards after receptions. He took advantage of New England’s two-tight-end sets, connecting with Martellus Bennett for three touchdowns. He tormented the Browns with short, precise passes and then tormented them with long, precise passes, like the 43-yarder to Chris Hogan that led to the Patriots’ third touchdown.