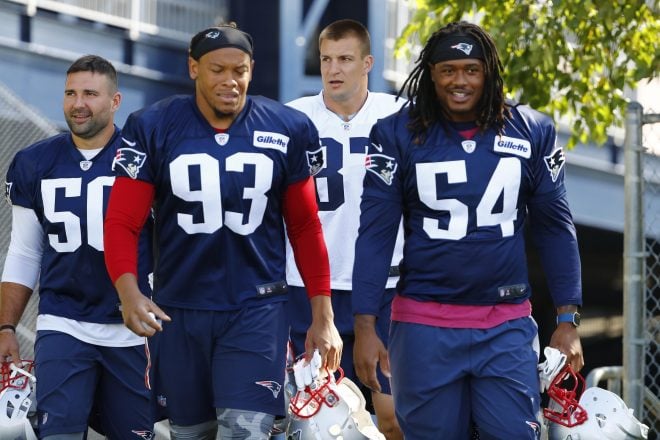 Nate Washington and Keshawn Martin were back at practice today. But they didn’t participate in the scrimmage.

Blue Team Rolls: The team tried to break up the starters as best as possible. Garoppolo had Gronk and the starting offensive line while Brady had Bennett and Hogan. Josh McDaniels called the offensive plays for the White Team. Brian Daboll in what could be a harbinger of things to come in 2017 if McDaniels gets another head coaching gig, called the plays for the Blue.

It wasn’t close, you’ll read wildly varying scores today depending upon the writers and they’ll all be correct. The teams didn’t always try for an extra point, and didn’t always kickoff but the blue team with Brady under center kicked the white team’s behind.

There were all kinds of exciting and intense play out there. We’re forbidden from mentioning everything we saw today as the Patriots Media policy prohibits certain reporting. Since we don’t always get media credentials like we did today we aren’t going to be the ones to break the rule.

But the blue team had a pair of interceptions, by Devin McCourty and on the final play by Jamie Collins that was returned for a pick-six. Jimmy G. only threw one. And Jacoby Brissett didn’t play. So you can draw your own conclusions.

The butt kicking began from the opening kickoff. V’Angelo Bentley was returning the kickoff for the white team from the left goal line and was absolutely tattooed by Geneo Grissom, who turned in a solid day all around on defense and STs. Grissom flew down the field and pushed his blocker, Elandon Roberts, back and the three players made contact at the same time. The audible pop was heard all over the field and drew oohs and aahs from the crowd.

Garoppolo didn’t have a great day. He was constantly besieged by the pass rush, Jabaal Sheard was having his way with Marcus Cannon, even when the tight ends chipped him on the way out. Sheard is quietly having another outstanding camp.

Garoppolo’s first pass was perhaps his best. He hit Gronk on a nicely thrown seam route with Brock Vereen in coverage. Four plays later he tried it again but Devin McCourty was able to block it away. On the next snap, he tried a deep fade to Aaron Dobson but Malcolm Butler who had a big day swatted it away.

Brady Has Big Day: Brady was “en fuego” for the entire day. His first pass was incomplete as Chris Long blew past Cameron Fleming and hurried the throw. But not many of Brady’s throws were hitting the ground on Friday morning. The only times he wasn’t picking them apart was when the white team got a pass rush on him.

He hit James Develin on an out pattern and could be clearly heard exhorting his teammate and being glad he’s back in the lineup for 2016.

Five plays later Brady spread Brandon Bolden out wide and had a mismatch on linebacker Kevin Snyder who was in single coverage. Bolden blew past him and Brady laid a perfect deep pass down the right sideline for the score.

Brady was fired up. He was talking a huge amount of trash after the score and he said after practice that “I push the other guys’ buttons and sometimes they push back against me.”

Hogan/Slater “Brady Fired up Team”: Both Chris Hogan and Matthew Slater marveled at how Brady’s competitive fire, livened up the practice.

Hogan who is a newcomer this spring, said, “Oh man, it’s contagious. Tom was fired up. The other guys were fired up and we were just there competing.”

Grissom again made the tackle on the kickoff, but a tad less as bone jarring as the first one. Jimmy G. made an initial first down and then facing a 3rd and 5, he was sacked by Ramon Humber who came on an “A-gap” blitz and they were forced to kick one of two field goals they mustered.

On the white team’s next possession, McCourty made an interception on a deep pass.

The blue team and Brady got Martellus Bennett involved in the next series, with the big man making three catches in the first four snaps. The third one, he was the emergency outlet with Long bearing down on Brady and kept the sticks moving. Three plays later Brady threw a really nice fade to Hogan in the right corner of the end zone with Logan Ryan in coverage.

Garoppolo was under siege again and was sacked by Vincent Valentine. He was nearly picked off by Rob Ninkovich with Sheard again bringing pressure. They again settled for a field goal by Gostkowski.

The white team squibbed kicked on the ensuing kickoff and Grissom made a heads up play fielding the ball and making a nice return to near midfield. Brady needed just one play to hit paydirt. He found Matthew Slater streaking down the left sideline, he juked Darryl Roberts and left him behind. Brady’s pass was on the money and Slater had an easy touchdown.

On the blue team’s ensuing possession Brady mixed it up to Hogan twice, Malcolm Mitchell and Bolden. Then the white team blew a coverage and Mitchell ran down the right sideline untouched and Brady hit him for what would have been another score. But they placed the ball at the spot of the catch. Brady was then sacked on successive plays by Long and a combined one from Shea McClellin and Rufus Johnson. This forced a field goal to make it 22-6.

The teams traded possessions with Sheard just abusing the right side, providing constant pressure on nearly every down. Blue kicked another field goal making it 25-6. The white team had one final chance but Garoppolo’s pass was picked off and returned for a pick six by Jamie Collins. 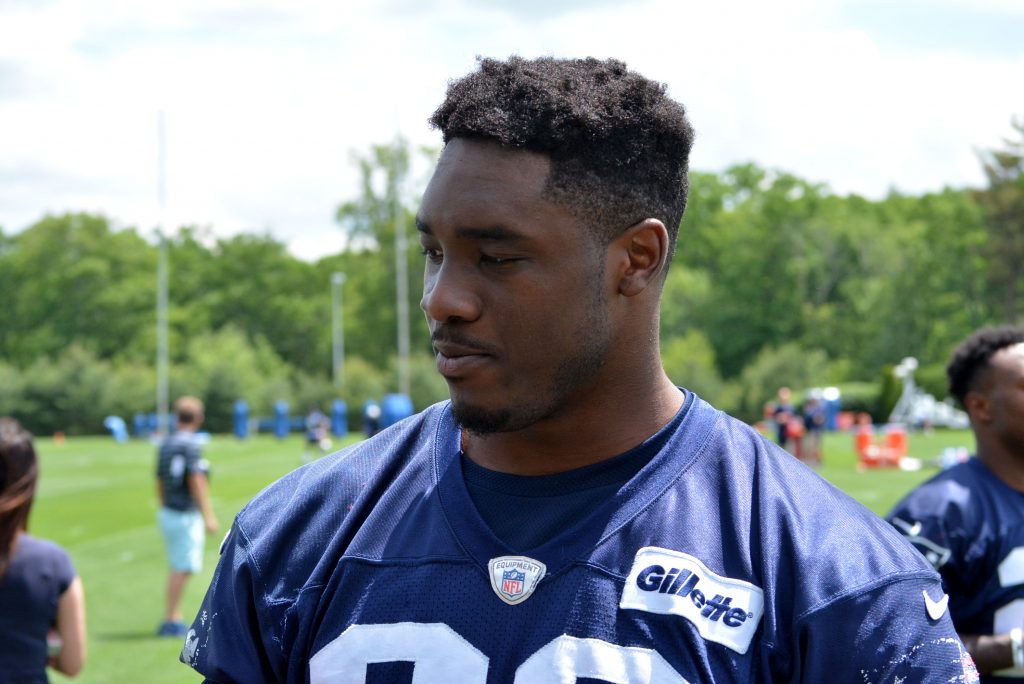 Players that stood out were Brady, Hogan, Mitchell, Sheard and Grissom during the scrimmage. Butler was also providing a steady blanket of coverage and was frustrating DeAndre Carter for most of the session.

Sunday’s practice has been moved to 2:30 p.m. Stay tuned to PatsFans.com for camp updates.