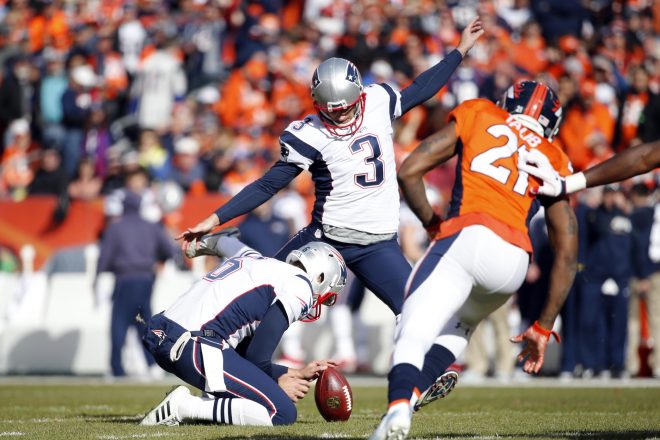 On Sunday afternoon versus the Buffalo Bills, New England Patriots were shutout at home for the first time since November 28th, 1993. It was an overall ugly showing by the Patriots offense who struggled mightily with rookie quarterback Jacoby Brissett under center.

Early in the third quarter, it appeared the Patriots finally had a shot at cracking the scoreboard when Stephen Gostkowski came in to attempt a 48 yard field goal.

In the moment, it appeared to just not be the Patriots day, but the missed field goal also left some fans wondering and concerned if something was wrong with their usually reliable kicker. It was the second missed field goal of the season for Gostkowski while also coming off a rather rough preseason performance. To top it all off, many are still haunted by the missed extra point in the AFC Championship back in January.

Everyone is freaking out about Gostkowski. Too early in the season too. It's just stupid

Gostkowski has really struggled on FGs this year. Little talked about story line, but he's fighting it.

Of all the bad signs for @Patriots today, Gostkowski missing a FG is easily the worst.

So the question remained a conversation piece following the game, is there something wrong with Stephen “Ghost” Gostkowski?

Through four regular season games in 2016 Gostkowksi is 6 for 8 on field goal attempts (75%) to go along with a perfect extra point record at 9 for 9. In his career, he has made 87% of his field goals, but through four games this season it’s his lowest output since the 2010 season (76%), which was lost for injury after eight games.

While Yes, Gostkowski has already matched his regular season total misses from 2014 (2) and just one off 2015 (3), he has already won a Special Teams Player of the Week Award this season following his assistance during the Patriots opening week one win against the Cardinals. In that game he was a perfect 3/3 with field goals of 47, 32 and even, a 53 yarder.

For an unfair comparison and a testament to the success of Gostkowski, through the first four games in 2015, he was a perfect 10 for 10 on field goal attempts and also had an impressive 57 yard field goal against made the Dallas Cowboys in week four.

Here’s a side by side look at the first four games each of the last two seasons.

While Gostkowski lacks the perfection beginning in 2016, it’s important to note the two Gostkowski field goals of over 50 yards in 2015 could have very easily gone either way. (The 57-yard game-winning field goal was a career high)

The 2015 Patriots offense as a whole through those four games also scored an average of 37 points per game with Brady, while only about 20 per game with Garoppolo/Brissett in 2016, rendering less extra point chances and more needs for Gostkowski this year.

Another comparison lies in the 2016 preseason; those numbers were very similar to the first four games of the current regular season.

Gostkowski 5-for-5 so far this preseason.

Gostkowski started off great in but then struggled in the third preseason game against the Carolina Panthers, but was 5/5 in the other three games combined.

Through eight combined games in 2016, none of the numbers show an eye-popping decline or injury, but the random blips in the life of an NFL kicker who is in his tenth NFL season. Gostkowski hasn’t shown any real signs of losing his accuracy but it will certainly be interesting to watch if he gets on another hot streak over the rest of the season. While it’s hard to really say four games in that he “hasn’t been the same since Denver”, think about this for a final perspective: Adam Vinatieri, at age 43 and 11 years older than Gostkowski, missed five field goals in the 2013 season (35/40), and in the three years combined since, is 63/66 on field goal attempts.

For now, as Tom Brady returns and the offense regains its normal preparations.  Nothing to worry New England. Stephen Gostkowski will be just fine.

Underrated part of Belichick's genius: Going from Vinatieri to Gostkowski. Kicking has NEVER been an issue.

How Was This Article?
Posted Under: Patriots Commentary
Tags: Adam Vinatieri Stephen Gostkowski