Brady, Ninkovich Return Monday: By this time tomorrow, the suspensions for both Tom Brady and Rob Ninkovich will be over and we’ll hear that those two were the first inside the doors of the Patriots practice facility. To quote the Grateful Dead, “what a long, strange trip it’s been.”

The popular narrative has been around New England being that Brady will return and set the league on fire, playing with a vengeance. While I expect him to play very well in his return, the idea that he’ll carry his play thru 12 games of the regular season and the playoffs fueled on rage is a rather far-fetched one.

He’ll play well for the reasons he always has, his practice habits and preparation are top notch and he always plays like he’s the 199th draft pick playing for his job. Seeing his fellow QBs succeed so well, that is the best fuel for him to return focused. While he won’t forget the ridiculous suspension by the league, that will be compartmentalized for a later date.

Bill Belichick was in rare form this week and had some classic answers for the media when asked some questions during his press conferences. His focus is squarely on the Bills and he’s not interested in any other line of questioning. Contrast that to what his opponent is doing

First he was asked about RB LeGarrette Blount’s workload, specifically, if he was comfortable with the number of carries he’s getting and would he like to see his carries scaled back. Belichick’s response was right out of his own playbook.

Belichick was also asked about the trash bags that Jamie Collins wore on his hands at the Patriots practice this week. In a total deadpanned voice, Belichick responded, “that would be a great question to ask Jamie Collins”.

Long Has Been a Nice Addition to NE:
The decision by Belichick to sign the former Ram DE as a free agent was met by a lot of ‘meh’ this spring. After being a very productive and disruptive pass rusher for the Rams, he suffered thru two injury plagued seasons and was a cap casualty.

Belichick signed Long to a very modest ‘prove it’ type deal this year right after the Chandler Jones trade with a clean slate and a chance to play for a winner. At nearly the quarter mark of the season, he’s been a superb addition to the defense.

Not only has he provided good QB pressure, but his ability to set the edge in the running game has been excellent. Pro Football Focus wrote that no 4-3 DE has been more productive in the pass rush department.

“After three games, Long is looking more like the player he was from 2010–2013, when he was constantly getting double-digit sacks, rather than the player from 2014–2015, who was either less-productive or out with injury.”

The veteran is now feeling more comfortable in the defense and is taking a more active role in the leadership department. The other players in the locker room already respected his on-field performance but they’re benefitting from his leadership off of it as well.

We often hear the term “Patriot Way” and at times it can be overused. But finding a valuable, passionate veteran who still has plenty to offer on the field and can be a leadership example to the younger members of the defense is a prime example.

Scruggs initially entered the NFL with the Seattle Seahawks as a DE after being drafted in the 7th Round (232nd overall) in the 2012 NFL Draft. He appeared as a backup in 14 games (missing the 2013 season w/injury) and had eight tackles, two sacks, and one pass defensed. He was released by Seattle and signed with Chicago last year before transitioning to playing tight end this offseason and was released on September 27.

Baby Gronk was signed by the Bills as a UDFA FB from Kansas State. He made the 53-man roster and appeared in the Bills opener against Baltimore before being released on September 12.

Tweet of the Week:
Patriots TE Martellus Bennett hasn’t been in Boston very long but was asked if he’d like to be part of an art project to honor David Ortiz. Bennett said he’s always admired Big Papi’s work and the multi-dimensional and talented Bennett put this out on his Instagram account. Some very nice work there. 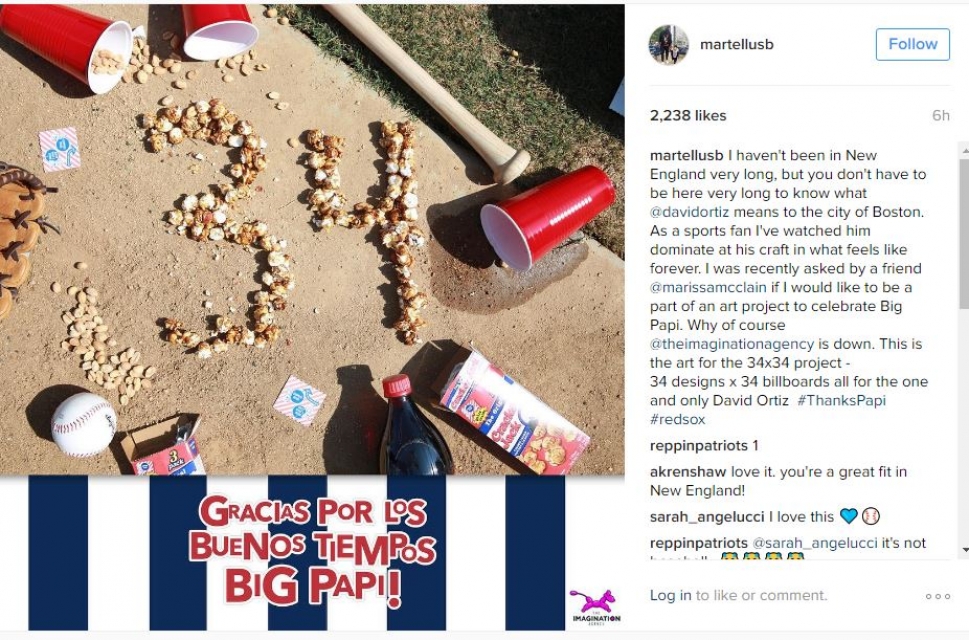 Who Do You Like This Week:
Another awful week (7-9) picking last week’s slate which brings me to 28-20 on the year, who do you like today.  I am going with for the games on tap today Indy, Carolina, Baltimore, Detroit, Houston, New England, NYJ, Washington, Denver, Arizona, San Diego, Pittsburgh, and Monday the Vikings over the Giants. Early pick for Thursday Night Football, (Arizona over SF).

While he was doubtful to play against the Patriots this afternoon, the Bills announced on Friday that WR Sammy Watkins was being placed on IR, effectively sidelining him until the end of November at the earliest. It is a huge blow to their passing game.

By giving him the time to rest and recuperate for his injured foot, the hope is he’ll be able to return this season and be his normal self. No further surgery is scheduled at this time. In lieu of Watkins, the Bills have signed WR Justin Hunter.

Buffalo is last in the league averaging 163.3 yards per game thru the air and losing their best WR in Watkins is a big loss. Were the struggles of the offense the first two weeks the result of fired OC Greg Roman’s play-calling or Watkins’ injury issues (63 yards receiving)?

Dolphins Bench Maxwell in Embarrassing Loss:
The Dolphins dropped to 1-3 on the season and are (at the moment) three games behind the Patriots in the loss column in the division with just four games played. This wasn’t the scenario that the team hoped for in hiring new head coach Adam Gase.

While the offense continues to struggle, after an opening drive 74-yard TD pass from Ryan Tannehill, they fell flat after the score, it is the defense that is making the news. CB Byron Maxwell was benched and didn’t play a single snap during the Dolphins bad loss to Cincinnati on Thursday night.

There was plenty of doubters when GM Mike Tannenbaum made the trade with Philadelphia that brought Maxwell and LB Kiko Alonso to Miami. It took three weeks for Gase to see that Maxwell was a mistake. Maxwell is due a big cap hit in 2017, chalk that one down as one that they won’t be paying.

Jets Will Be Without Decker for Big Game Against Seattle:
The Jets will be without WR Eric Decker for today’s game against Seattle as the Jets talented player has a partial tear of his rotator cuff in his right shoulder. Decker has two touchdowns and is averaging 21.6 yards per catch during the first three games. He made only a single catch last week against Kansas City. It isn’t known if he’ll need surgery down the road, but for now, the team is hoping rest and recovery will do the trick.

WR Brandon Marshall has been hurting with foot and knee woes of his own, and he’s not been having the season he enjoyed a year ago. His catch percentage is down to 44 percent which is a big drop from the 65 percent in 2015. While coach Todd Bowles is saying they have to do a better job of getting him the ball, they really need a healthy Marshall on the field.

Before going with the Seahawks this Sunday, remember that West Coast teams traditionally struggle with East Coast games at 1 p.m. games.