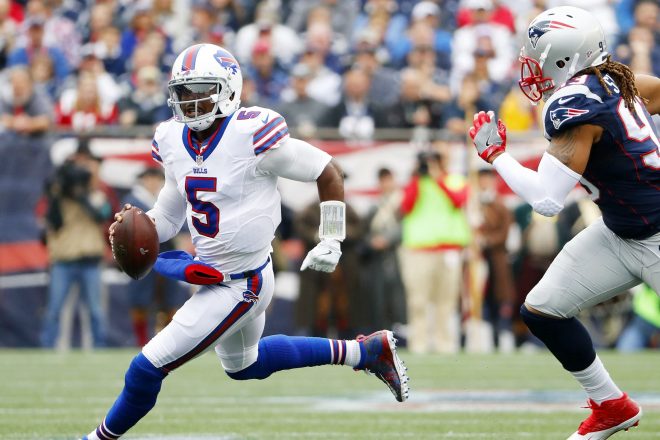 The Patriots didn’t look like a team that had 10 days to prepare for this game. They played sloppy football from the opening snap and were shutout 16-0 by the Buffalo Bills on Sunday afternoon in Foxboro.

With the loss, the Patriots drop to 3-1 and still lead the division by a game over Buffalo (2-2), both Miami and the Jets lost and fell to 1-3. But with a chance to put the entire division in the rear-view mirror with Tom Brady suspended for the first quarter of the season, they dropped the ball.

Bill Belichick said that they didn’t perform in any one area that was good enough, and he was correct. The offense made too many mistakes and let too many chances to score slip away. The tackling by the defense was particularly bad, with too many missed tackles to count, letting both LeSean McCoy and Tyrod Taylor slip away time after time. The pass rush was non-existent, and they allowed a second-tier quarterback have all day to survey the field which was deadly. As an uninspiring receiver core had their way with the secondary all day long. It all adds up to an ugly outcome. And it was.

On the opening kickoff, rookie Cyrus Jones should’ve taken a knee, came out of the end zone and realizing his mistake too late, stopped. By the time he got running again, he was swarmed under at the nine-yard line, putting Brissett and the offense in terrible field position. A 90-yard pass play to Edelman was wiped off the books on a penalty to Hogan.

The punt by the Patriots gave Buffalo very good field position and they marched right down the field with ease. It was capped off with the only touchdown of the day, a 7-yard Taylor pass to McCoy in the right flat. It was also one of those borderline calls that all didn’t go the Patriots way as Buffalo could’ve easily been called for the same illegal pick play that negated the Edelman catch. The extra point made it 7-0. Belichick re-watched the play on his Surface tablet and slammed it to the ground in disgust. It was that kind of first half and day for New England.

Jones made back-to-back blunders by deciding again to take out the kickoff five yards deep and getting only back to the 14-yard line. The Pats went quickly to a three and out and the Pats were forced to punt again. Buffalo took over on their 32. They drove again down the field with Taylor picking the secondary apart underneath with 8-10 yard passes that were too easy to complete. The Bills went 67 yards in 10 plays and settled for a Dan Carpenter 34-yard field goal that made it 10-0 early in the second quarter.

Taylor finished the first half 17-22 for 165 yards and a touchdown. That is more yardage than he’s been averaging for an entire game thus far this season. Put this awful performance right on the laps of the coaching staff. As much as they put the team in position to win last week, they didn’t have a good plan against the Bills and once they saw it wasn’t working the adjustments they made, didn’t happen until the second half and by then it was too late.

Buffalo controlled the line of scrimmage on both sides of the ball and their pass rush kept rookie Jacoby Brissett off-balance for the majority of the game. Brissett was uncomfortable in the pocket and was never got into any rhythm, completing only one pass to a wide receiver (Edelman) on the day. He missed on a wide open Danny Amendola on a deep seam route and overthrew Chris Hogan in the end zone. The only player he clicked with was TE Martellus Bennett who caught 5 passes for 109 yards.

It seemed like they were finally getting untracked when Brissett hit Bennett for a 58-yard catch and run down the right sideline. Two plays later a terrible spot on a Blount run left them with a third down and one. The Patriots rushed up to the line to snap the ball but referee Pete Morelli’s crew blew the whistle because, as he announced to the crowd, the officials weren’t set. On the ensuing play, David Andrews was whistled for holding. On third and long, Brissett tried to scramble and instead of taking what he could and sliding, allowing an easy field goal try, he made a rookie mistake. Trying to break a tackle, he was drilled and fumbled the ball away.

Morelli’s crew had a day as ugly as New England. Julian Edelman was dragged down by an obvious horse collar that somehow went uncalled. Brissett was drilled out of bounds on a close call and James White was thrown to the turf beyond the white strip on the sidelines that was ridiculous that it wasn’t called.

The third quarter started with the Patriots down 13-0 but holding Buffalo to a three and out. Brissett moved the Patriots to the Bills 30, converting a fourth down in the process. He took a thunderous hit on third down but put the ball perfectly to Brandon Bolden down the right sideline which should have been an easy touchdown. Bolden dropped it and then on the ensuing FG try, Stephen Gostkowski pushed the ball wide right.

Ryan Allen had another solid game for the Patriots, one of the few bright spots on the day. He punted six times for an average of 52.2 yards, with a long of 58.

It was that kind of afternoon for the Patriots. Carpenter added a 44-yard field goal to make the final score 16-0.

Belichick should have a good close look at the film and bury the game ball behind the practice field as they’ve done in the past. He was outcoached by the windbag Rex Ryan on Sunday and the team was outplayed from start to finish.

We’re on to Cleveland.