6 years ago at 5:47 am ET
Follow @SteveB7SFG
Posted Under: Daily Patriots Rundown

Belichick’s Press Conference Gets Snarky Tuesday:
Media members were referencing ESPN’s Ed Werder’s piece that the Patriots were holding out hope that Jimmy G. may still be available to play this week during Tuesday’s presser with Bill Belichick. And the constant asking of basically the same questions about the status of Garoppolo and the readiness of Jacoby Brissett ultimately reached a tipping point.

Belichick could be seen to be tiring of the subject and answered several times with, “we do what we feel is best for the football team.” His patience wearing thin with the line of questions, he cracked a line that immediately went viral on social media.

“I’m a football coach; I’m not a doctor,” Belichick said when pressed on Jimmy Garoppolo’s availability. “The medical staff is the medical staff. I coach the team; the medical people handle the injuries. They don’t call plays. I don’t do surgeries. We have a great deal there. It works out good.”

One reporter who continued with this line of questioning got a blank stare for more than 10 seconds before Belichick snapped back.

He then added: “Let me put it a different way — I’m the coach, I do what’s best for the football team. I don’t know why we can’t understand that.”

Patriots Pressuring Garoppolo to be Available:
In another twist of the situation, Jeff Howe of the Boston Herald reported on Tuesday afternoon thru his own sources that although Jimmy Garoppolo is having trouble even lifting his arm at this point due to the AC sprain in his throwing shoulder, that the Patriots are pressing him to be available for Thursday night’s game against Houston. 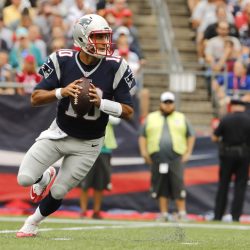 Garoppolo’s status for Thursday is still in the air.

Howe stated that the team wants the QB to press thru the injury even reminding him that Tom Brady played thru the same injury multiple times in the past. During the media portion of the practice on Tuesday, Garoppolo was not seen, however, the Patriots reported his participation as limited so that there’s still hope for his availability to at least backup Jacoby Brissett tomorrow against the Texans.

If he indeed is still having trouble lifting his arm at this point, there is no way he’d be able to throw the football with the velocity he’d have to in a game situation. So the value of his being available on such a short week is kind of moot. With a little more than 36 hours before the kickoff, we’ll see if anything changes.

Patriots Bring in Two QBs but Sign Neither:
In a related move, the Patriots worked out two quarterbacks on Tuesday in a move that many were waiting to happen after the injury to Garoppolo.

According to Adam Schefter of ESPN, the Patriots brought in former Texan T.J. Yates and former Falcon backup QB Sean Renfree for workouts on Tuesday but both left without signing a contract.

Chalk this one down to doing due diligence. How much a QB could learn of the offense in one day with just a walk-through scheduled for Wednesday and a Thursday night game on tap is negligible.  And the bringing in of Yates who started for the Texans a year ago may just be an added bit of gamesmanship.

Gronkowski’s Hamstring Healing, is “satisfied” with Rehab Status:
In other injury news, Rob Gronkowski was in full uniform for Tuesday’s walk thru practice and is inching toward a return. Since injuring his hamstring in a joint practice with the Bears on August 15, the big tight end hasn’t been more than a limited participant in more than a month.

While stating that he felt “decent”, his status for Thursday’s game was definitely still up in the air. And Gronk wasn’t making any statements that would have you believe that his availability was bound to change this week.

“We’ll see,” he said. “It will definitely be a coach’s decision, a trainer’s decision.”

“I’m just doing everything I can right now to be as healthy as I can be. I’m improving every single day. Basically, day by day right now. Obviously, you just don’t wake up and you’re 100 percent, but I’m satisfied with the improvements.”

Osweiler Leans on Experience During Short Prep for Thursday:
Texans QB Brock Osweiler was asked about the amount of prep the team is lacking this week in their game on the road against the Patriots and he stated he’ll rely on his experience of facing them a year ago.

“It’s a huge challenge and like you said on a short week. Anytime you play the New England Patriots, you know it’s going to be a challenge. Then when you add in the factor that it’s on the road and it’s on a short week, it’s an extra big challenge. We know what we’re facing. We’re facing an extremely talented football team that has won a ton of football games in the recent past.”

And his experience of facing them a year ago? “I think it gives me a huge help moving into this week, especially with it being a short week,” Osweiler said. “We don’t have a ton of time to watch film, to game plan, to practice. So for me to have a little bit of experience playing against them I think will be a big help.”

Osweiler told the Houston media that he remembers being sore after the game in Denver a year ago where he got sacked three times and got hit seven more. “The one thing I do remember is obviously New England has a little bit of a blitz package on third down and that’s something that I’m going to go back and look at,” Osweiler said. “My game from last year with Denver when we played them and really look at and say ‘How could I be better in protection? Was there something that maybe I could have done to eliminate some of those hits?’”

“The one thing I do remember is obviously New England has a little bit of a blitz package on third down and that’s something that I’m going to go back and look at,” Osweiler said. “My game from last year with Denver when we played them and really look at and say ‘How could I be better in protection? Was there something that maybe I could have done to eliminate some of those hits?’”