6 years ago at 4:30 pm ET
Follow @AllThingsPats
Posted Under: Uncategorized 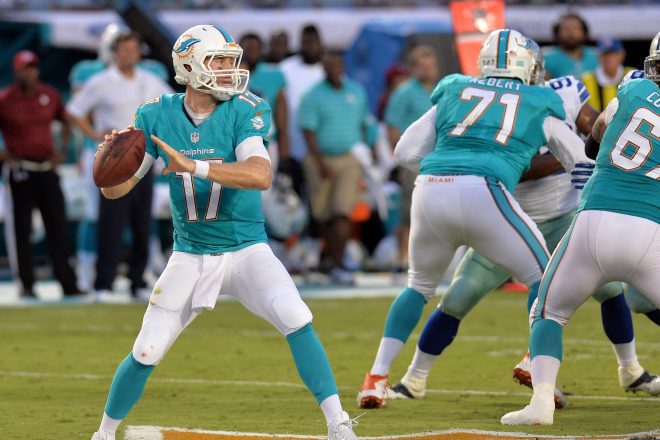 While speculation on the Patriots quarterback situation in the wake of the injury to Jimmy Garoppolo dominates the headlines and airwaves in New England, it is a different story in south Florida. Searching for reactions from Miami on the Dolphins loss, I was mildly surprised to find that the big story was neither the Fins first half futility nor the second half comeback, but instead centered on what players did not stand for the national anthem. I suppose a contrived controversy that has nothing to do with the game should not be the least bit shocking. Clickbait rules the day.

I was expecting to find a profusion of talk about how ineffective Miami was on both sides of the ball in the first half. Instead the focus of many discussions was on the Dolphin comeback. The fact that the Patriots were trying to run out the clock with a rookie third string quarterback was glossed over. Only one article brought up the fact that Miami was unable to defeat a Patriot club playing without five key starters.

More than once it was pointed out that the Dolphins came close in games at Seattle and Foxboro, two of the most difficult places for a visiting team to walk away with a victory. I suppose when it has been eight years since your team has had a winning season your expectations are tempered. One playoff appearance in fifteen years can cause writers to seek silver linings, and result in fans finding moral victories.

Miami Dolphins lose, but their energy bus is moving in the right direction | Palm Beach Post

The feeling is that this Dolphins team is different.

That coming back from a 31-3 deficit, in the second half, at the New England Patriots, is relevant.

I see a resiliency, an effort that fell short, yes, but an indication that this team won’t quit under first-year coach Adam Gase.

But climbing back within a touchdown of tying Bill Belichick – whether he had Tom Brady or Jimmy Garoppolo or Rob Gronkowski or Dont’a Hightower in the lineup or not – is relevant.

All that mattered, when a backup safety named Duron Harmon came down with Ryan Tannehill’s 45th and final pass, was an eighth loss in as many years at Gillette Stadium.

They didn’t (win) a week ago in Seattle. And they didn’t here Sunday. The Dolphins (0-2) have now played in the two toughest stadiums in the world. And they’ve lost by a combined nine points. In the standings, however, it’s no different than 90.

It was a credit to Tannehill that the Dolphins even had a shot at the end zone on the final play.

The Dolphins would have been blown out of the Commonwealth if Tannehill didn’t take the game over in the second half.

Miami scored touchdowns on three consecutive possession in the second half, and Tannehill was the catalyst.

They came in search of their future and found their past. Every bad game the Miami Dolphins have played in Gillette Stadium, they relived – and even outdid – just in Sunday’s first 30 minutes.

By the Patriots’ final drive Sunday, they had the look of a pick-up team. Third-string, rookie quarterback. Two rookie guards. A second-year undrafted center. A back-up tackle. And no All-World tight end in Rob Gronkowski.

This defense has issues. They got a lot of praise after the opener for holding Seattle to 12 points. Seattle scored three points against the Los Angeles Rams on Sunday. Hmm.

Dolphins offense comes alive late, but cannot take sting out of loss to Patriots | The Phinsider

The Miami Dolphins were embarrassed in the first half of their game against the New England Patriots earlier today, then hit the reset button at halftime and almost made the improbable comeback. It was an impressive performance from the offense in the second half, making their way back into the game, but they were let down by a defense that could not make a stop when it mattered the most.

They were one minute away from beating the Seahawks. They were two yards away from tying the Patriots. And, both of those games ended with Miami putting a number in the loss column. That hurts.

This stings, and it probably will for a while. Miami had the Patriots on the ropes, and they could not stop them from running the ball right down the field and killing the clock. They had a third-string, rookie quarterback on the field, and the defense could not rattle him.

There can be hope from what we saw this week, but there are a lot of clouds blocking it right now. The Dolphins have to figure out a way to get the offense moving earlier in games and the defense needs to finally show up.

Lost in Dolphins’ loss: Ryan Tannehill was ‘awesome’ in second half | Miami Herald

The Dolphins nearly made history Sunday.

The biggest comeback in franchise history is 24 points (against the Patriots in 1974). They trailed New England by 28 in the third quarter, yet had a shot to tie the game on the final play before falling just short.

Ryan Tannehill led the rally. In the second half, Tannehill was, as Jordan Cameron put it, “awesome.”

The proof? Tannehill had 273 of his 389 passing yards, plus both of his touchdown passes, after intermission.

The Dolphins got seriously outcoached by Bill Belichick and his staff

Miami’s struggles weren’t all talent-based because you could argue Miami’s starting 22 matched up well with New England’s suspension- and injury-impacted 22, which forced New England to play without five starters. The problem was Josh McDaniels’ schemes were far superior to what Dolphins defensive coordinator Vance Joseph’s unit threw his direction, and Miami’s offense didn’t warm up till late in the third quarter.

Now a backup for the Miami defense, Cameron Wake has struggled to make an impact during the first few weeks of the season. Having a sack negated by a penalty during Sunday’s game, Wake’s season total now sits at zero tackles, zero sacks, and one quarterback hit.

If Wake is to continue as a monster pass rusher, he will have to find his attacking ways once more in the coming weeks.