5 years ago at 5:38 pm ET
Follow @IanLogue
Posted Under: Uncategorized

Bill Belichick has said on more than one occasion that things can change pretty quickly when it comes to injuries, and Sunday’s game against the Dolphins was a prime example of what he was talking about.

After leading the Patriots to three touchdown drives, Jimmy Garoppolo went down after taking a vicious shot from Dolphins linebacker Kiko Alonso, who hit Garoppolo after he fired a pass to Malcolm Mitchell on a 3rd-and-9 play for a 15-yard gain and a first down.  Alonso wrapped up Garoppolo and took him down, driving the quarterback’s throwing shoulder into the ground.

Garoppolo got up slowly, his right arm hanging down as Mitchell came over to congratulate him on his great throw.  Joining him was LeGarrette Blount, who was also happy about the terrific play Garoppolo had just made.  But as he headed back to the huddle, Garoppolo obviously knew something was wrong.

The quarterback dropped down to one knee before trainers came out to check on him.  From there, up jumped third-string quarterback Jacoby Brissett, who started getting loose while Garoppolo continued being tended to by the team’s medical staff.

He was in obvious pain as trainers worked on him, wincing in pain as they pressed into his ailing shoulder as Bill Belichick stood over and observed the doctors trying to evaluate his quarterback.  Shortly after, Garoppolo got up and walked off the field to the locker room and just like that, Belichick’s concerns about being ready for any situation were brought to light as Brissett took the field.

The rookie quarterback was a surprise to many when he was taken in the third round of this year’s NFL draft with the 91st overall selection, especially given the fact the team already had Garoppolo playing behind Tom Brady.  But now the move may end up being one of the most critical ones of the offseason since the rookie could potentially find himself starting Thursday night when the Patriots take on the Texans at Gillette Stadium. 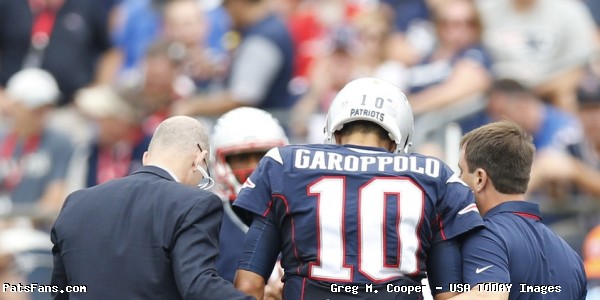 “There’s always an element of team planning, especially at that position,” Belichick said back in May on Brissett. “If you can, you try to look ahead a little bit. If you can’t, then take it as it comes. Things change, but there’s an element of planning at all positions on your team, certainly that one.”

At the time he was likely thinking about Brady’s suspension but Sunday instead proved that it’s another example of the how well this team tries to prepare for the worst.

Up until now, the worst hadn’t happened for nearly 8-years, with Brady’s injury in 2008 being the one that stands out.  This year it’s happened twice, with Brady’s suspension being the first hurdle and Garoppolo’s injury now making it two in one season.

Prior to his injury, the Garoppolo had been on fire in his first two games, and was off to the races Sunday having completed 18-of-27 for 234 yards and 3 touchdowns through 10-minutes of the second quarter.  After his performance Sunday, he’s completed 42-of-60 (70%) on the season, with four touchdowns and a QB rating of 117.2.

With Brissett stepping in, according to Mike Lombardi, it left the Patriots with Julian Edelman as their emergency quarterback, with the former standout at Kent State as their go-to guy had anything happened to Brissett.

After finishing the game, Brissett suddenly finds himself as “the guy” as Jeff Howe of the Boston Herald reported that Garoppolo is expected to miss this week’s game against Houston and possibly longer, which will be another test for a coaching staff that up until today had done a great job with Garoppolo prior to him going down. A report by Kevin Duffy of MassLive after the game said the quarterback didn’t suffer any broken bones, which is certainly a positive sign, but it may mean, barring an injury to Brady when he comes back, it could be the last time we see him this season.

That leaves Brissett as the obvious candidate to get the call Thursday night and it will be interesting to see how he performs, especially on a short week.  But the fact he’s here at all is a testament of how smart Belichick and the front office is, which may allow them to survive more adversity on the offensive side of the football having already gotten through another game without Rob Gronkowski, who remains sidelined with a hamstring injury.

But Patriots fans can at least take solace that Belichick planned for a moment just like this one.  Now they’ll just have to hope Brissett is ready to rise to the challenge of maintaining the bar Garoppolo set before they lost him on Sunday.