Jimmy Garoppolo had a solid outing in his first NFL start in Arizona, showing far more promise of any Patriots quarterback not named Tom Brady during the Bill Belichick era Sunday night against the Cardinals.

Taking a look at the numbers, the veteran quarterback played well, keeping the vast majority of throws in front of him while not trying to do too much.  He only attempted four passes of 15 or more yards on the night, keeping the remaining 29 attempts under that distance with pretty good balance, especially on the outside.

Looking closer, here’s how it broke down: 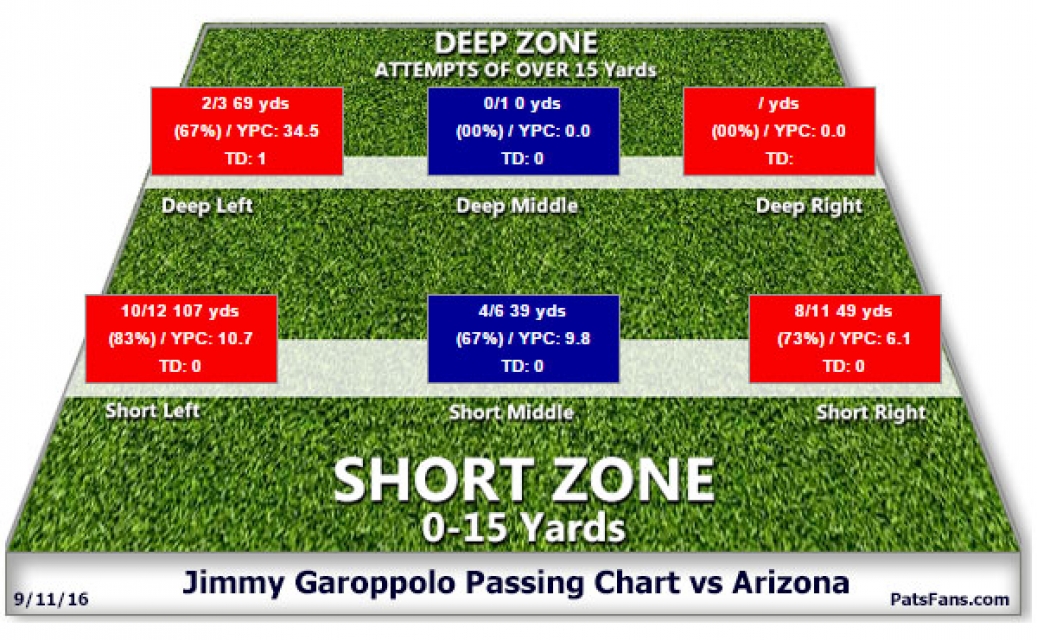 SHORT MIDDLE: Garoppolo was 4-of-6 (67%) for 39 yards on passes to this zone, his lowest attempt total of the three zones.

SHORT RIGHT: Garoppolo finished the night 8-of-11 throwing to this zone, with Edelman finishing as the leading receiver after catching all four passes thrown his way.

DEEP LEFT: Garoppolo had pass attempts of over 15 yards down the left side three times and hit on two of them, with the most memorable being the touchdown pass he hit to Chris Hogan, which went for 37-yards.  The other was  another big one, with Garoppolo hitting Amendola for a 32-yard play on a 3rd-and-15 on what proved to be their game-winning drive.  Throwing the deep ball seems to be his strength, which we saw Sunday night.

Strong on 3rd Down:

Perfect in the third quarter: