The NFL announced that they will honor victims, first responders, and military personnel on the 15th anniversary of that horrible day in 2001. Not often on these pages where you find us applauding the crew on Park Avenue but in this case, they’re spot on.

Most of us can remember exactly where we were at when the four planes crashed in NYC, Washington D.C., and Pennsylvania. We put our petty differences aside and united as one people. One of the compelling images on that awful day was watching survivors leaving Ground Zero covered with soot, one couldn’t tell if they were black, white, yellow or red. They were all gray. But most importantly they were us, they were Americans.

That’s why I think this entire protest thing going on with the NFL is wrong, especially today of all days. Colin Kaepernick has every right to protest social injustice in this country. That’s what every veteran who’s ever put on a uniform defended. It isn’t up to me to tell him he can’t feel this way, I’m not black so I can’t relate to his feelings there.

Brandon Marshall joined in with his own “look at me” minute, and now we are told the Seahawks as a team will not stand during today’s game.

Standing during the national anthem isn’t just about honoring the flag. It is about honoring us as a nation, as a whole. Are we perfect? No, and our nation will never be that. The USA is a microcosm of its people. There will be racists, criminals and ne’er do wells in all shapes and sizes. But what made this country great was it was a beacon of hope. We don‘t judge a man’s worth on who his father was, but on what he can become on his own. Everyone here has equal worth and the NFL is living proof of that.

Men of color have fought, bled and died for that flag which represents us. The first black man in the US military was a citizen of my hometown of Millbury, Mass. Peter Williard. He fought as a militiaman at Lexington and Concord and later enlisted in the Continental Army. The Buffalo Soldiers of the 9th and 10th Cavalry during the Old West and the Tuskeegee Airmen, the Red Tails of the 332nd Fighter Group.

If Kaepernick and the Seahawks want to stand for something, honor them. On this of all days is a time to stand together, not apart.

Injury Report Today Shows How Difficult Predictions Can Be:

Writing up our pregame keys and our players to watch is often an exercise in speculation. Without being in the room with Bill Belichick and the coaching staff, it is especially difficult trying to judge who will play and sit. This week was one of those times.

We try to read the tea leaves and predict as accurately as possible how things will play out. We followed the old Patriots maxim of “if they speak to the media, they’ll probably play” in the case of Rob Gronkowski and whiffed badly on both pieces.

We thought that Gronk, practicing every day would be ready to go and be a big part of the game plan (on both sidelines) for tonight’s contest. And were way off…which many of you have been very nice (and quick!) to point out in emails and DMs on social media.

So the only thing we can say is…we’ll take the kudos when we’re right and the slings and arrows when we’re wrong. We’re like Avis…we’ll just try harder.

With Gronkowski Out, Do the Patriots Use 2-TE sets?
So moving along with Gronk angle, without the big man in the lineup will the team use a lot of 2-TE sets or will they bring in the extra WR for the offense? And if they do use the extra tight end who will get the reps opposite Martellus Bennett?

A.J. Derby was more impressive during the summer and appears to be the better blocker inside. He also showed some nice hands in the passing game as he was finding some open real estate and moving the chains. Clay Harbor is more of a move tight end but he was playing catch up all summer after beginning training camp on PUP. 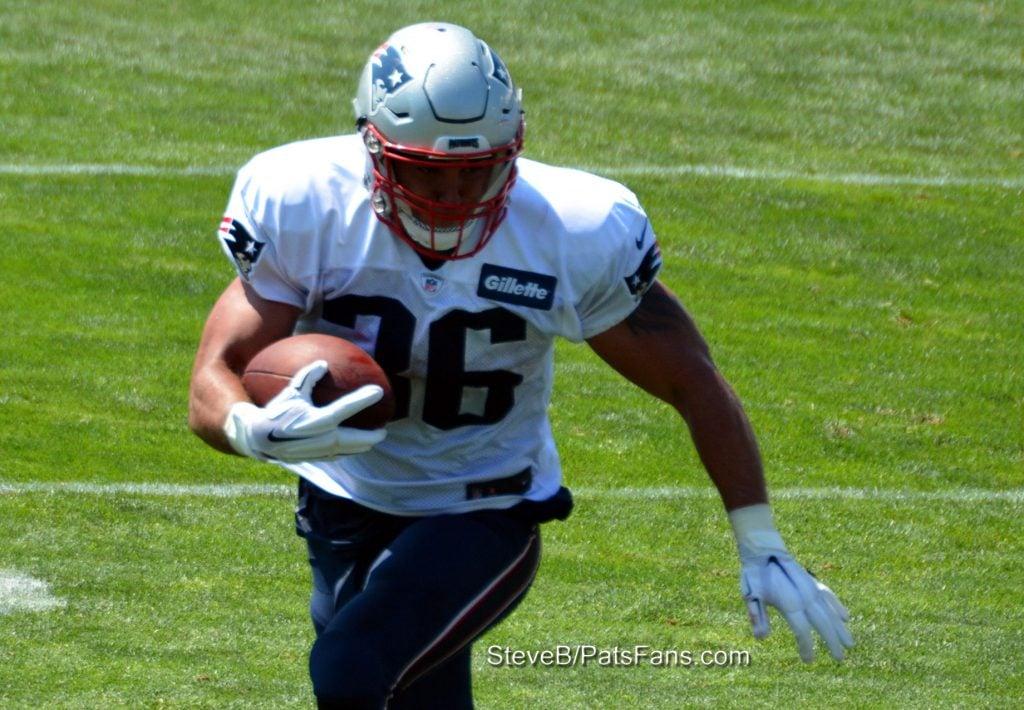 Bill Belichick usually favors the veterans in these type scenarios. They have the experience to fall back on. While both should see some reps, they’ll be testing the waters to see who will give them a better chance at winning the matchup battles.

Gisselle Bundchen, wife of Tom Brady posted a pic of the two on her Instagram account. It showed Bundchen leaping high for a pass from Brady and the caption read, “Don’t worry guys, I will keep him ready.” Brady also stated in a radio interview on Thursday on Westwood One that he thought the banners at Gillette Stadium were “a very cool gesture.” 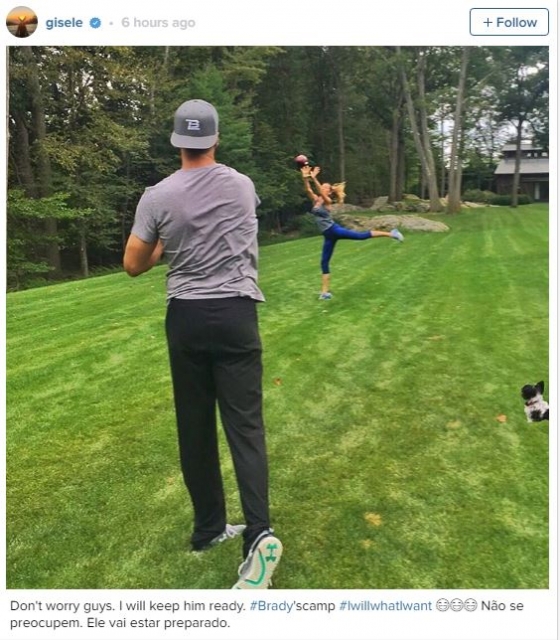 Cooper still an Unknown Quantity:
When the Patriots made the trade with the Cardinals this offseason, they moved DE Chandler Jones for G Jonathan Cooper and a 2nd-round NFL Draft pick. The Patriots flipped that pick into a 3rd (Joe Thuney) and a 4th (Malcolm Mitchell) so…on paper everything looks rosy from a Patriots perspective.

But what do we really know about Cooper yet; After struggling with injuries in Arizona, he was brought in here with a clean slate. At first, in the spring and in the first few days of training camp, he was getting all of the first-team reps at right guard. Working with the legendary OL coach Dante Scarnecchia, things were looking up.

But in the first padded practice, he went down with an injury. It was later learned the former 1st-round draft pick suffers from a plantar fascia issue. He’s been limited since July 30 and questions remain, what do we really know about his play at this point? He made the 53-man roster but in reality, he had about half of one practice against his teammates. For now, he’s full of more questions than answers.

The Bills announced that backup tackle Seantrel Henderson will start serving his four-game suspension this week for testing positive for marijuana. Earlier Henderson had said that he’d appeal the suspension. But he changed his mind after meeting with the team.

Henderson suffers from Crohn’s Disease and he had said that he used marijuana to take the edge off of the debilitating pain that he suffers from. He’ll be eligible to return Week 5 or October 3rd.

In his absence, coach Rex Ryan stated that T Cyrus Kouandjio will take over the swing tackle duties behind starters Cordy Glenn and Jordan Mills.

Dolphins Scratch RB Jay Ajayi for Seahawks Game:
Miami now has a RB controversy. After spending a 5th round pick for Ajayi in the 2015 NFL Draft, he entered the 2016 offseason as the team’s top tailback. But the team drafted Kenyan Drake and Damien Williams this year and signed Arian Foster via free agency this summer.

Rumors were circulating that Ajayi, who was demoted after Foster rose up the depth charts, was pouting and may have left the team for a short time. The truth to those are still under investigation but one thing’s for certain. The Dolphins under new coach Adam Gase won’t tolerate that and Ajayi is being left off the active game day roster for a reason. This will bear watching if the team decides that Ajayi may or may not have a future in Miami.

Jets Open Up Brutal Six Week Crucible with the Bengals:
The Jets finished last season with a 10-win season and narrowly missed the playoffs. But they (finally) brought back QB Ryan Fitzpatrick and added RB Matt Forte to a team that was already deep in offense weapons to go along with a very stout defense.

Now they open the first six weeks of the season facing five teams that made the playoffs a year ago. First up are the Cincinnati Bengals at the Meadowlands followed by a primetime game in Buffalo, a team coached by the Jets former boss. Then Gang Green heads out to Arrowhead to play the Chiefs.

The Jets return home to face the Seattle Seahawks then go back on the road to face the Pittsburgh Steelers and the Arizona Cardinals. That’s among the toughest schedules by far for the first six weeks and will either have the team in a prime position to contend or far back in the standings.
Follow me on Twitter @SteveB7SFG or email me at [email protected]