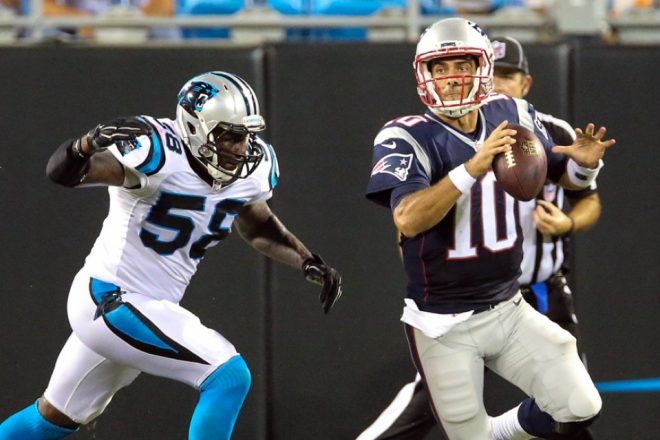 Jones on Garoppolo, “I have seen him make some great throws” – Chandler Jones is a little more familiar than most of his teammates when it comes to Patriots quarterback Jimmy Garoppolo, and despite the fact the third-year quarterback will be making his first NFL start this weekend, Jones isn’t taking him lightly.

With Tom Brady sidelined to begin 2016, the Cardinals are in a unique situation that opponents after Week 4 won’t be in, which will see them take on a Patriots team that is missing their future Hall of Fame quarterback.  The first game of the season tends to set the tone for the rest of the season, and given how the Cardinals season ended in the playoffs last year the home crowd will likely be pretty amped up for Sunday night’s match-up.

It will be a big test for Garoppolo, who will have to overcome a hostile crowd in what should be a good test for the former Eastern Illinois standout.  As for Jones, he knows he and his teammates will need to shut down Garoppolo and the Patriots’ offense, but the veteran still expects a tough match-up even with Garoppolo at the helm.

As for Garoppolo, with Brady gone the responsibility now firmly rests on his shoulders and he’s spent this week hard at work getting ready for Jones and the Cardinals.

“It’s busy, that’s for sure,” said Garoppolo when asked about being the starter. “There’s not much time to rest or anything like that, but that’s what I expected. It’s going pretty smooth right now. We’ve just got to keep it rolling this week.”

Gronkowski Limited at Wednesday’s Practice – The Patriots are seemingly taking it easy with veteran tight end Rob Gronkowski, who was listed as “limited” when the team released their first injury report of 2016 on Wednesday.

Gronkowski hasn’t quite been the same since pulling up lame in a joint practice session back on August 15th against the Bears and it seems the Patriots are being cautious with him heading into Week 1 in Arizona.

But the fact he was at least out there is good news, especially as he joins Julian Edelman and Danny Amendola as the trio is hopefully set to make their first start together of the season.  Having all their top players back on the field has been something Garoppolo has enjoyed, and he’s looking forward to taking them into battle this weekend.

Patriots Work Out Eight Players Including QB – The Patriots may have set their roster this past weekend but that hasn’t stopped them from continuing to do their due diligence when it comes to potential additions to their team.

According to NESN.com, the Patriots tried out eight free agents on Wednesday, one of which included a quarterback along with five wide receivers.

They did reportedly add one player to their practice squad, signing linebacker Quentin Gause, while releasing Rufus Johnson.

Amendola Lands on Magazine Cover – We haven’t seen much from receiver Danny Amendola during the preseason as he continues recovering from offseason surgery, but it looks like the veteran may be on a newstand near you very shortly.

According to the Patriots’ official site, Amendola will be on the upcoming cover of the October issue of “Men’s Health” magazine.

The veteran is pictured with his shirt off showing off his physique in the issue, with a teaser that reads, “How MH Guy and NFL Receiver Danny Amendola Gets Fit.”

This marks the second-straight year a Patriots receiver has been in the magazine during the month of October, with Julian Edelman appearing in it last year.

Roethlisberger Weighs in on Brady – Ben Roethlisberger knows what it’s like to miss the first four games of the season after having been suspended for the same span in 2010 when he was accused of sexually assaulting a 20-year-old woman, which the league deemed a violation of the NFL’s personal conduct policy.

When asked about what advice he would give Brady, Roethlisberger didn’t have any, because he doesn’t believe Brady needs it.

Roethlisberger said via ESPN that Brady “doesn’t need any advice from anybody.”

Added the Steelers quarterback, “Tom’s the greatest in the world, and I mean that.”

Roethlisberger’s comments came after former Steelers quarterback Terry Bradshaw put the Steelers’ QB “ahead of Brady for sure and anybody else.”

There’s obviously bias given the difference in quarterbacks and their accomplishments, so we’ll let that one slide as Bradshaw is from a region where he couldn’t say anything else.  But given Brady’s Super Bowl victories and the fact he appears like he’s still in position to win a couple of more, that debate should easily be tipped in Brady’s favor by the time their two careers come to an end, if it hasn’t already.

Vellano Lost His House, and His Job, Last Week – In the NFL, most players know it’s just a business but last week was a harsh reminder of that reality.

Long-time Patriots defensive tackle Joe Vellano became a casualty of a talented group on the defensive line when he was released by the team over the weekend as New England made their final roster cuts, but that was hardly the worst thing that happened to him.

Vellano reportedly lost his home to a fire last Thursday, which he apparently found out about as he was out on the field warming up against the Giants.

During the game Vellano played in 18 defensive snaps and three special teams snaps, finishing the game with four defensive tackles.  From there he arrived back in New England in the wee hours of Friday morning to assess the damage, and one day later the Patriots added insult to injury when they let him go.

His agent, Sean Stellato, told the Albany Times-Union that it’s been a tough run for Vellano, who has certainly had one of the worst weeks we’ve seen a player endure in recent memory.

“I always believed God gives you what you can handle,” Stellato told the newspaper. “I guess we had to re-check that statement. He definitely dealt with a tremendous amount of adversity the last few days.”

Fortunately his story has some good news, as he did find a new job after landing a place on the practice squad with the Falcons Tuesday.