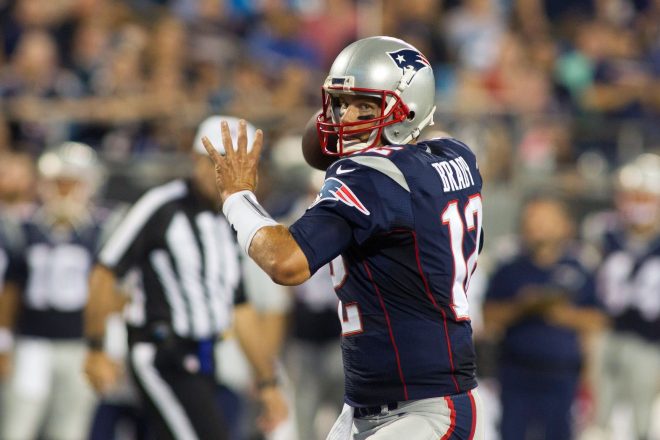 No Surprise Cuts as Club Moves Lewis, Vollmer to PUP

The Patriots made their expected cuts to bring the roster to the league mandated 75-man limit on Tuesday and unlike the Terrance Knighton release, there were no surprises.

Running back Dion Lewis who requires additional “clean-up” surgery on his knee and tackle Sebastian Vollmer were moved to the reserve/PUP list meaning that neither can return before Week 6 but not after Week 11. With Vollmer’s ailing hip issues, however, it is rumored that he won’t play at all in 2016 and being a free agent next season, would probably mean an end to his Patriots playing days.

The team also released reserve TE Steven Scheu, OL Keavon Milton, and LB Ramon Humber. None were expected to make the 53-man roster although Humber, with his STs experience, was thought to have an outside shot to stick there. But the recent addition of LB Barkevious Mingo ultimately put an end to those hopes.

The biggest and most difficult cuts come on Saturday when the team has to cut to their 53-man roster limit. The six-man practice squad can be announced the next day.

LeBlanc Missing: There was also a number of players missing from practice yesterday due to injury. Among them, rookie CB Cre’Von LeBlanc who is suffering from a hip ailment. LeBlanc’s absence on cut-down day sparked a social media feeding frenzy with Patriots fans panicking that the young corner had been cut.

With the limited window the media is allowed now at practice, after the stretching/warm up period was over, WR Danny Amendola, G Jonathan Cooper, and G Tre’ Jackson retreated to the lower practice fields with members of the training staff for conditioning work.

The good news was that DEs Rob Ninkovich, Jabaal Sheard, and WR Malcolm Mitchell were staying with the rest of the team and taking part in positional drills. Mitchell was spotted wearing a large brace on his injured arm but his presence was definitely a positive sign that his return will be sooner rather than later.

Gearing Up for the G-Men: Now with the final preseason game against the Giants upcoming, Bill Belichick and the staff will try to find the delicate balance between getting the starters some needed reps and giving the players on the bubble one more chance to show they belong. 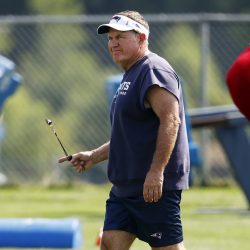 Belichick smiled when asked if it will be a different experience facing a Giants team without Tom Coughlin across the sidelines, and cracked, “Tom probably misses us, he had a lot of success against us over the years.”

But pressed on the issue if the fringe players would see the most playing time, he answered that “any time you go out on the field, be it a game situation or a practice, it’s an opportunity, and not just for the players but the coaches as well.”

He also took a thinly-veiled shot at the league when asked about Baltimore coach John Harbaugh’s comments that preseason games should be cut back or eliminated and more joint practices held to prepare teams for the regular season. Belichick deadpanned, “Well, I think we’ll let all the experts in the league decide that. That’s not really my job,” he said.

“My job is to coach the team. But I think our joint practices give us extra opportunities to evaluate the team, so that’s why we use them. I’d say probably almost every team in the league does that.”

While Belichick remained mum on the team’s plans on Thursday. Most expect Jacoby Brissett to possibly start and play the vast majority, if not all the snaps under center this week. He would gain some invaluable experience and go thru the motions of preparing to start his first NFL game. The coaches will have to weigh that or getting Jimmy Garoppolo some additional work.

Two other players to watch on Thursday are WRs Aaron Dobson and Keshawn Martin. Dobson was rumored to be shopped around by the Patriots according to NFL.com’s Albert Breer. The 4th-year wide receiver is locked into a struggle to make the roster and Mitchell’s role would likely impact that.

Martin, who was given a new contract this season with a good ($600K) signing bonus, may also find himself on the bubble. He missed a significant amount of time this summer, and now is trying to get some reps, find a comfort level again in the offense and secure a position on the roster.

Asked in the locker room if he’s feeling pressure, he said, “I don’t look at the pressure. I just want to go out and do my job and let my game speak for itself.” To see more of his brief talk with the media see the clip.

Brady Wants to Play Thursday: Mark this one under the no-surprise category. In his final press conference before his suspension takes place, QB Tom Brady made it clear that wants to play against the Giants this week.

“I’ve got a good day of practice. I’ve tried to look at all these days of practice as ways to get better. I have access to the fields, and throwing to my receivers. Try to use those days the best that I can, just like I always would. I got another hopefully opportunity to play on Thursday night, be with the team Friday, and then try to do the best that I can over the next month.”

Brady flashed a wry smile when told that the league will allow him to work out with his personal QB coach Alex Guerrero during his suspension. “Well that was nice of them,” he said.

Asked if he’d share what his plans were doing the first month of the season, he said simply, “We’ll see.”

Pressed, he was asked, does he plan on staying in the area? “We’ll see,” he repeated.

One of the media members asked him if he’d share anything at all about his plans.

“No,” Brady said. “I don’t. In case anyone else is in this situation in the future, I don’t want to give away all my tips.”