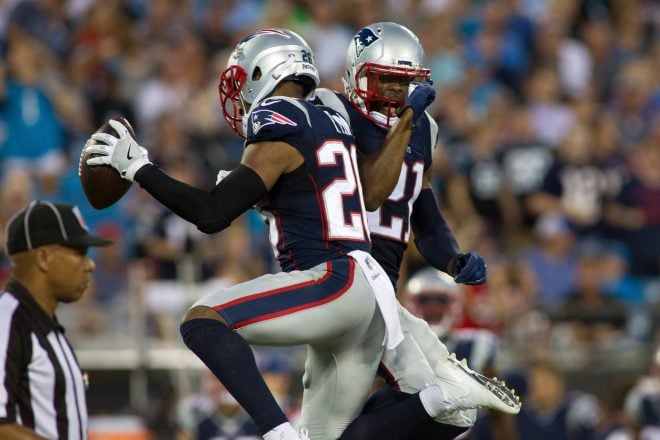 The Patriots improved to 3-0 on the preseason for the first time since 2003, and after taking a quick look at Friday night’s game, here’s a quick look at eight players who definitely made an impression during New England’s 19-17 victory over Carolina.

Tom Brady – Brady’s return Friday night was one of the highlights of the evening, and you could see the difference he made in the offense.  He came in following Garoppolo’s third offensive series and had great field position after the Panthers failed to convert a fourth down at midfield.  He immediately hit Aaron Dobson for a 37-yard gain to start the drive and helped lead them down to the Panthers 7-yard line where Stephen Gostkowski made up for an earlier miss by hitting a 25-yard field goal, which put the Patriots up 3-0.

Brady then came out on the next drive with good field position yet again thanks to an interception by Devin McCourty, and on the third play of the series hit Chris Hogan on a terrific throw for a 33-yard touchdown strike, which gave them a 9-0 lead.  The next series saw him drive to the Panthers’ 34 yard line, and the drive stalled after A.J. Derby dropped what would have been a 3rd down conversion.  From there Gostkowski missed a 52-yard attempt wide right, which would have been Brady’s third straight scoring drive.

Overall he finished the night a paltry 3-of-9, but the biggest thing that stood out was the difference in the overall rhythm of the offense, which looked much more in command than they did with Jimmy Garoppolo.  While that’s not Garoppolo’s fault due to the obvious difference in experience, it is a reminder of the difference in play that the Patriots will be trying to work through while he’s sidelined to begin the season.

Chris Hogan – Hogan had one of his biggest games since joining the Patriots Friday night, and it started from the first play from scrimmage on offense for New England.  After a botched Panthers punt gave the Patriots the ball at midfield at the Carolina 49, Hogan caught a slant from Garoppolo for a 17-yard grab that helped put New England in business right away at the Panthers 32 yard line.   That helped set up what should have been an easy 30-yard kick for Gostkowski, but the veteran missed wide right.

But Hogan’s biggest play of the night was when he hauled in Brady’s perfectly thrown 33-yard touchdown pass, which was both a great throw and a nice catch by the receiver.  He finished the night with 5 receptions for 62 yards along with his touchdown, which now has him second on the team in receptions with 9, including 115 receiving yards. He’s come a long way this preseason, and he seems to be starting to fit in well into the offense.

Logan Ryan – Ryan had a great night and he was solid in coverage right from the beginning of the game.  Ryan was involved on two pass plays on the first drive with tight coverage that led to two errant throws by Newton, and his interception while covering Kelvin Benjamin was well-played as he was with him step-for-step and made the leaping catch to take the football away.  The two battled for much of the evening, and despite the size advantage Benjamin held (6’5″ compared to Ryan’s 5’11”) Ryan more than held his own. 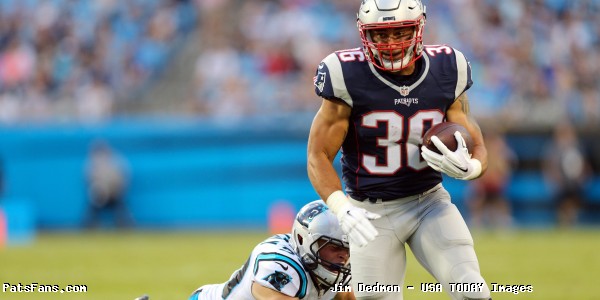 Tyler Gaffney – This was easily Gaffney’s best outing so far.  The former Stanford standout showed some terrific explosiveness as he hit the hole Friday night, breaking through the offensive line and making some big plays, including two runs of 14 and 15 yards.  He was also elusive when he hit the open field and led all running backs with 9 carries for 35 yards.  He seems like he’s finally starting to gain some confidence and he certainly made a strong case for himself after a strong performance Friday night.

LeGarrette Blount – For the second straight week Blount went out and played well, but he added a little flair this week.  He was seen leaping over defenders, finishing the night with 5 carries for 26 yards and also had three receptions for 16 yards, two of which went for first downs.  After a slow start he seems to have come on lately, which has been helped by some improved play up front on the offensive line.  But the way Blount has been cutting and his overall explosiveness have been two of the most encouraging signs, especially since the veteran is coming off a season-ending hip injury he suffered last season.  However, he looks poised to hopefully settle back into the lead back role, which is certainly even more important given the fact they’ll be without Dion Lewis to start the season.

Malcolm Butler – It was another stellar night for Butler, who was great in coverage and kicked things off by absolutely drilling the Panthers’ Ed Dickson and set the tone for the night.  The veteran cornerback already looks like he’s in midseason form and has been terrific thus far, and he looks like he’s picking up right where he left off last season.

Trey Flowers – Flowers continued his strong preseason Friday night and led all defenders with six tackles including a sack, and was part of a Patriots pass rush that did a great job making things difficult for Panthers quarterback Cam Newton.  He’s been one of the bigger bright spots so far in 2016, and if what we’ve seen is any indication, he could be a player to keep an eye on this season.

Jacoby Brissett – Brissett was surprisingly the star of the night at the quarterback position, finishing a perfect 9-of-9 passing for 85 yards and a touchdown.  It was a pretty good night overall for the former NC State product.  He was careful with the football and threw the ball well and looked about as comfortable as he has so far this preseason.  Granted he did it against quite a few 3rd and 4th string players, but he’s played well enough to prove that the Patriots should feel relatively good about having him backing up Garoppolo, and even better about having such a talented player as their third-string QB.

The Patriots will close out the preseason next Thursday night at 7:00pm ET down in New Jersey against the New York Giants