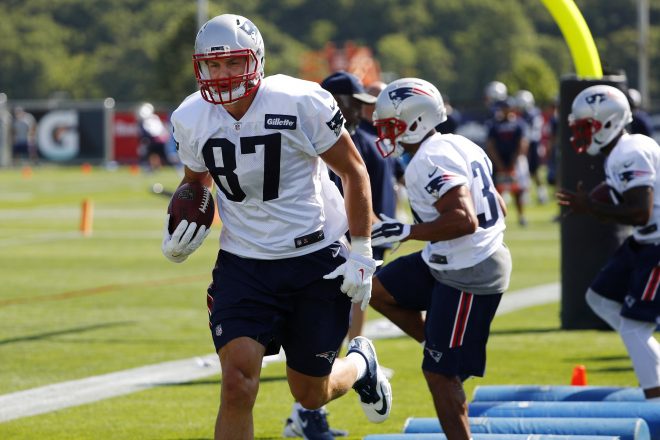 Gronkowski leaves early on Monday due to injury – Training camp has had some scary moments thus far, and on Monday tight end Rob Gronkowski left fans gasping as he hobbled off the field after coming up lame during 7-on-7s.  The veteran left practice accompanied by a trainer after looking like he was in serious pain, although there doesn’t seem to be any real indication of what his injury was.

The good news is, the NFL Network’s Ian Rapoport reported that the injury was “minor”, with Rapoport Tweeting “No worries” about the veteran tight end.

After practice, Jimmy Garoppolo was asked about the injury but the quarterback told the media he was unaware the veteran had left practice.

“I didn’t even see him leave to be honest,” said Garoppolo. “Hopefully he’s alright, and we’ll see what it is.”

Fights break out at practice – One of the things Bill Belichick doesn’t tolerate are his players getting in physical altercations, and on Monday against the Bears he went so far as to eject one of his most important players.

Bears receiver Alshon Jeffery and Butler battled it out during practice, which started off with the veteran cornerback giving the receiver a hard jam with both hands to his chest as he seemingly tried to send a message.  That fired Jeffery up, and the battle was on as they went back and forth, although the Bears receiver was able to make plays against the veteran.

That seemingly led to frustration that ultimately ignited the altercation.  Butler and Jeffery were spotted grabbing each other’s facemasks on Monday, and after receiver Josh Bellamy went over and shoved Butler, it sparked a brawl that led to Butler getting the boot from practice, while Bears coach John Fox kept Jeffrey out of action.

Butler’s ejection wasn’t a surprise given Belichick’s blanket policy when it comes to situations like these, but the cornerback ended up being the only player removed from play.  There ended up being a second skirmish involving former Bears tight end Martellus Bennett and Lamarr Houston, but that one didn’t escalate.

After practice, Duron Harmon told reporters that the policy Belichick has is the same for practice as it is in games, and Butler simply paid the price.

“Coach (Bill) Belichick has a no fighting rule, and when you do that, you’ve got to get kicked out, just like a game, and then go inside,” Patriots safety Duron Harmon said via NESN.com. “And that’s what happened (Monday). Malcolm Butler’s a talented player, and obviously we don’t want that to happen. We don’t want to lose him, because he’s a big part of what we do.”

Garoppolo Has Success vs Bears – Garoppolo had success against the Bears secondary, which included a terrific touchdown throw to Devin Lucien.  According to the Boston Herald, he finished 13-of-18 on the day including 9-of-12 in 11-on-11s, while completing passes to completed passes to Martellus Bennett (three), Carter (two), Dobson (one), Clay Harbor (one), Derby (one), Bolden (one), Chris Hogan (one), White (one), Washington (one) and Devin Lucien (one).

Garoppolo’s final pass of the day was a laser throw to Lucien for a touchdown on a post route, and he also threw another to Bennett earlier in the day.  He said after practice that he tries to keep a consistent approach as he continues trying to improve.

“Yeah, you know, being a quarterback you can’t be too high, can’t be too low,” said Garoppolo.  “You kind of just have to be even keeled throughout the whole thing, and I mean it’s football. Good things are going to happen, bad things are going to happen, you try and minimize the bad things, but when they do happen you have react well to them, you know your teammates are always watching you and you just want to react the right way.”

Patriots Raise The Bar For the Bears – Practicing against the Patriots was a good barometer for a Bears team that is coming off of a tough start after their loss last week, and getting to see how Belichick operates was likely a nice change of pace for the Bears.

Fox told the Chicago media that he let Belichick take the lead in terms of how they practiced on Monday, and they went ahead and adjusted.

“I think any time you come visit, the practice standpoint of the facility, you really tend to kind of go a little bit more with what they do,” Fox said via WGNRadio.com. “It’s kind of a good changeup. That’s how the Patriots have kind of done it and we’re working with their practice set up.”

They certainly need a little help.  Thursday night saw Cutler and the offense struggle, and it was pretty ugly.  Chicago’s first team offense didn’t fare too well in their disappointing 22-0 home loss, which included a less than inspiring performance.

The Bears first team offense managed just 13 yards, 12 of which came on their first play from scrimmage on a pass to Jeffery.  Cutler played in just the first three offensive series of the game as the Bears went 0-for-3 on third down, which included two third down sacks and an incompletion.

That’s not the recipe for success for a team that’s trying coming off of a disappointing season, and head coach John Fox knows it needs to be better.

“We’ve got a lot of room to improve,” Fox said. “As I mentioned before, our last outing over a season was 6-10. Last place. We need to improve.”

Brock Vereen Retires – The Patriots brought in former running back Shane Vereen’s brother, Brock, at safety over the offseason, but it doesn’t look like he’ll be on the roster for 2016.

According to the league’s transaction wire, Vereen has surprisingly opted for retirement at the age of just 23 years old.

The veteran had been having a pretty good camp with the Patriots, but for whatever reason has decided to walk away from the game.

Vereen leaves having played spent seasons in the league, having been drafted in the fourth-round by the Bears in 2014.

Could Garoppolo End Up in Chicago? – The Bears already have one former Patriot quarterback on their roster, but there’s already speculation in Chicago about whether or not another one might be in their future.

Former Patriot Brian Hoyer is currently a back-up behind Cutler right now, although he struggled in practice Monday, which included being picked off by Eastern Illinois rookie Kamu Grugier-Hill on the first snap of a two-minute drill.  The Chicago Tribune’s Brad Biggs wonders if given the problems the Bears continue to have whether or not they’d bring Garoppolo in to try and turn things around.

It’s an obvious landing spot if things don’t go well in Chicago this year, and dealing him out of the conference certainly makes sense.

First, he has to play well, and he’s just excited that his shot to prove himself is finally here.

“You know, it’s an opportunity and I’m excited about it,” said Garoppolo.  “It’s a privilege to be in the situation I’m in and you just got to go take advantage of it.”