6 years ago at 6:00 am ET
Follow @LeeSchechter
Posted Under: Patriots Commentary 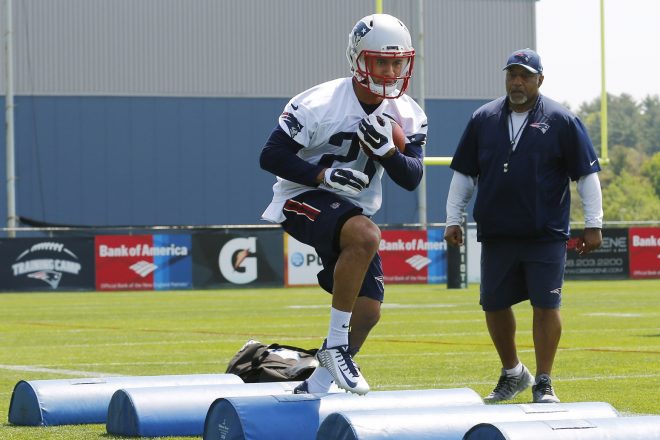 Wide receiver and cornerback competitions may be stealing the show at Patriots’ training camp. Though, running back remains the most questioned and uncertain position on the Patriots’ roster.

At the top, Dion Lewis is making his return from his ACL injury. Lewis will undoubtedly be a major factor in the offense. Though, Lewis has yet to fully return to practice. But, that is mainly precautionary measures.

As for the power back role, LeGarrette Blount initially looked like he could find himself on the roster bubble with an incentive-laden contract and very little guaranteed dollars on top of a low-money deal. But, Blount came into camp in possibly the best physical condition he has opened a Patriots’ season in. Blount likely solidified his spot as the team’s lead power back, though it isn’t set in stone yet.

While Lewis and Blount own the top of the depth chart, the running back position after the top two is hazy at best even after a couple weeks of camp. For the time being, injuries have put a damper on the ability to test out everything that the Patriots have to work with. Undrafted rookie D.J. Foster of Arizona State has been day-to-day along with free-agent signing Donald Brown who is looking to revitalize his career. Both are unfit to practice for the time being.

James White and Brandon Bolden are in the mix, but White is still just a solid pass-catching back who is a shell of what Lewis brings to the team. White has an opportunity to break open the competition if he can work his way between the tackles in his third season. As a true runner, White has looked overwhelmed and frankly lost in his first two seasons, but he knows that his focus has to shift to working on his vision and finding gaps in the defensive fronts to burst through if he wants to survive in the NFL.

Meanwhile, Bolden is still a special teamer who can be a reliable deep-down-the-depth-chart back with his serviceable skills as a strong runner and above-average pass-catching back.

Ideally, Foster and Brown will be back in the mix with the New Orleans Saints in town for joint practices. Though as of Tuesday, they were still doing conditioning drills. So while they are on the verge of returning to practice form, a forgotten back has been seizing his opportunities and could crash the party in the Patriots’ backfield.

After two injury-plagued seasons, Stanford product Tyler Gaffney has begun to see his workload increase. Gaffney is making the most of those chances in what could be his final opportunity to seize an NFL job. While likely the result of injuries in the backfield, Gaffney’s practice workload uptick shouldn’t be written off. He has an immense skill-set that translates exactly to what the Patriots need in their lead backs. Gaffney is big at 6-feet and about 225 pounds. He runs with a physical nature and can catch the football. Also, Gaffney’s production has never been an issue for him when Gaffney is healthy. As a senior, he amassed 1709 yards and 21 rushing touchdowns in 2013.

The Patriots have a history of taking a virtually “no-name” player and turning him into a serviceable running back. Does the name Jonas Gray ring a bell? Gaffney is making the most of having a slew of carries coming his way.

Joint practice reps and the first preseason game will provide some clarity in the backfield.

Now is the time where initial coaching is complete with the fringe players. Bill Belichick and his staff will be in player evaluation mode for the remainder of the week and during the game against the Saints. Running backs will be front and center in the evaluations as this group is in a wide-open race.

But Gaffney’s talent and Foster and Brown’s imminent return will heat up the competition.