6 years ago at 7:32 pm ET
Follow @SteveB7SFG
Posted Under: Uncategorized

WR is Removed from PUP and participates in practice

The Patriots got a great bit of news on Sunday afternoon when wide receiver Julian Edelman was removed from the PUP list and returned to practice.

Edelman has been a frequent visitor to the training camp sessions and was seen on Friday running the hill at the far end of the practice facility with Danny Amendola. Edelman was in full pads and not wearing a red non-contact jersey which speaks volumes about his health.

He took part in the warm-up drills at the beginning of practice and the WR drills but was held out of the team’s scrimmage. He retreated to the lower practice fields with multiple other players to work out with the training staff.

“Anytime you can go out there and practice with full pads before the season, it’s a good sign,” he said. 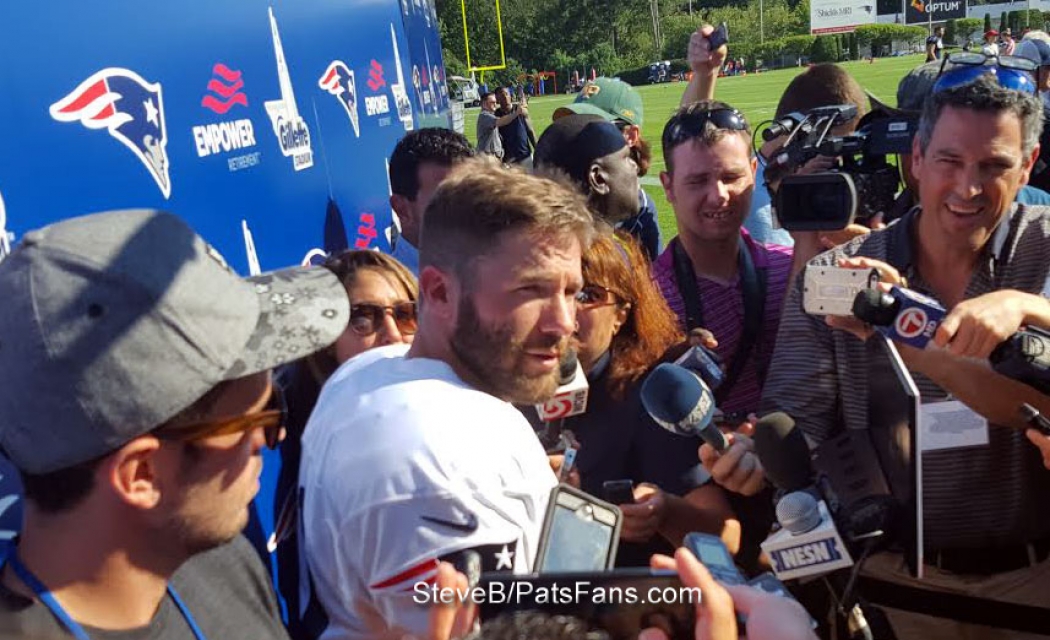 Edelman looked like his normal self and was running and cutting the way we have been accustomed to seeing him. After Brady sat out a series, allowing Jacoby Brissett to run the offense, Brady, and Edelman who had returned, retreated to the far field to work on their chemistry.

“Any time you have 1-on-1 time with any quarterback it’s very valuable,” he said. “Today, me and Tom got to throw a few. It’s always good to see where we’re at, and see our timing and have him see my mechanics and have me see his mechanics, me catch his ball. It’ll be good to get out here and do that with multiple guys

“Today, we just went out there and got in some drills,” he added. “Tried to catch some balls from some guys, and just going out there and being around the team, and went down and did our own thing (away from the team) . . . I’ll do what they tell me to do. That’s kind of where we’re at.”

Edelman being among those closest to Brady on the team was asked about Brady’s decision to drop the appeal for his four-game suspension.

This is great news for not only Edelman but for all three of the quarterbacks as well. Now Edelman, who the team will be very cautious with during the preseason, will be able to work on his chemistry with all three of the quarterbacks on the roster. He’s the go-to guy at the WR position and he and Rob Gronkowski are the team’s most trusted weapons for Brady to utilize. Now Jimmy Garoppolo will be able to start working with Edelman both during and after practice.