Patriots Announce Joint Practices with Saints, Bears:
The Patriots made the “official” announcement for training camp dates, (we’ve been doing a countdown for a month). But the bigger news was the set dates for the joint practices with the Saints and the Bears. Prior to the two respective preseason games, the Patriots will have two practices  with each of those teams.

All of the practice sessions will be open to the public and a word to the wise…arrive early. The crowds are huge for these practices and if the joint practice with Philly two years ago is any indication, it will be crowded. The Patriots opened the stadium walkways so that fans could attend and watch the practices from high above.

On Monday, Pats TE Rob Gronkowski was asked if there’s concern with the possibility of QB Jimmy Garoppolo starting the first four games of the 2016 season. With Tom Brady’s suspension still looming, if any of the assembled media was thinking he’d be concerned…think again.

“He’s doing great — definitely,” Gronkowski. “You can see a huge development over the last two years in the way he handles the offense now. He’s doing a great job going out there, listening to coaches and just working together with the whole team.” 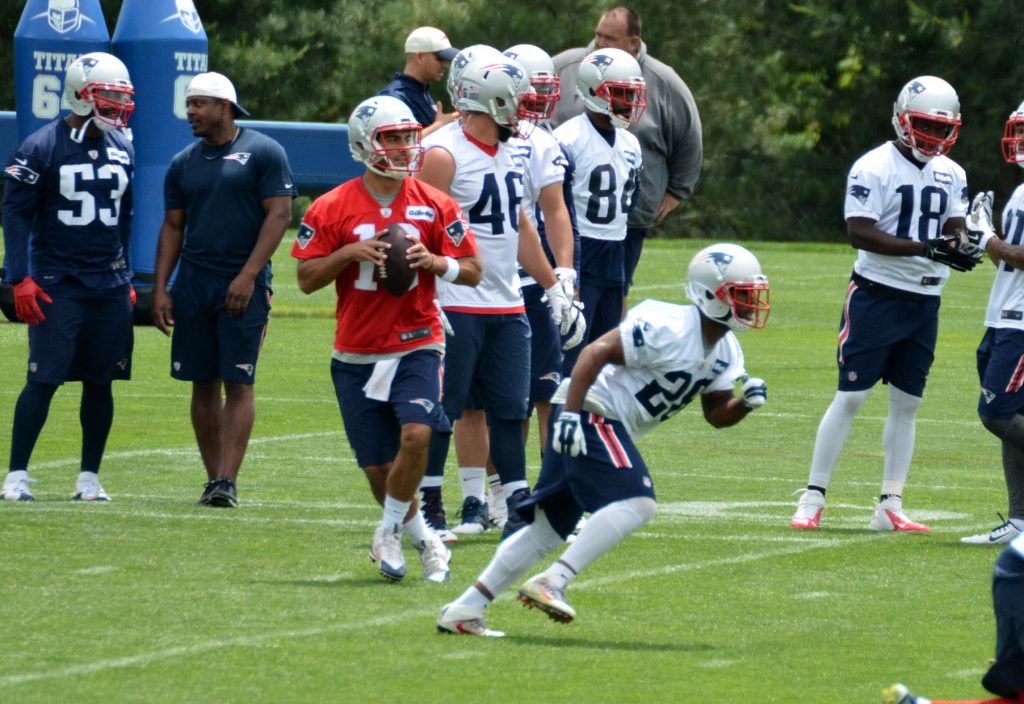 Gronkowski then turned the attention to Brady and once again to no one’s surprise, he was very upbeat. “He looks pretty good… No, he look’s great,” Gronkowski said. “He looks the same every day that I’ve been here. He’s always coming out with a competitive edge, his arm always looks strong. His football knowledge, you don’t have to talk about it, it’s second to none.”

Kraft Among Investors Attempting to Buy UFC:
Robert Kraft is among the investors looking to buy the UFC. According to ESPN, there are two bids on the table to buy the UFC, supposedly for $4.1 billion dollars.

Kraft is a minority investor in the WME-IME bid where the members of the group were asked to contribute between $25 – 50 million dollars each. Kraft’s investment would only be about 1 percent of the total but if the deal goes thru, UFC would then have a partner in the largest sport in the world.

The UFC like the NFL shows no signs of slowing down with the fans and would be a very savvy investment.

Lombardi Leaving Patriots After Two Years:
Mike Reiss of ESPN broke the news that after two years as an assistant the Patriots coaching staff, Mike Lombardi is leaving the team and his position immediately, although the departure is reported to be amicable. Lombardi, a good friend of Bill Belichick has been a confidante and aide to the coach, helping make personnel decisions as well as helping on the practice fields. He was in attendance during minicamp on the field a week ago.

Reiss reports that Lombardi may be joining his friend Bill Simmons in a new HBO sports show. Lombardi has been  a fixture in NFL circles, having worked in a variety of positions, including the GM of the Cleveland Browns in 2013. He’s also been in front of the cameras, being a regular on the NFL Network from 2008-2012.

Kraft Honoree at ESPN Humanitarian Awards:
Patriots owner Robert Kraft will be recognized on July 12 as a Stuart Scott ENSPIRE award honoree at the ESPN 2nd annual Sports Humanitarian of the Year Awards.

In honor of the late ESPN commentator Stuart Scott, this award celebrates someone who uses the power of sport to make a positive impact on society. Candidates can include anyone who works within the sporting world. The honorees will be awarded a $50,000 grant from ESPN to be used at the charity related to the award-winning humanitarian efforts.

“Kraft has donated hundreds of millions to charities since becoming the owner of the Patriots, yet it’s not just the number that’s impressive, but the innovative and personal way he’s leaving an imprint on communities across the region. Kraft is a fierce advocate for ensuring all residents of New England have access to quality healthcare. To that end, he’s investing millions of dollars to attract the best clinicians to assist the most under-served populations through the community healthcare systems. He started a fellowship that provides coursework at Harvard, mentoring, clinical practice and even a student-loan repayment of $50,000 per year in return for a three-year commitment to community health following completion of the program.”

Brissett Inks 4-Year Deal:
And then there were nine. Jacoby Brissett became the final member of the Patriots 2016 draft class to sign his contract.  Mike Reiss of ESPN Boston posted the details of Brissett’s deal which include: 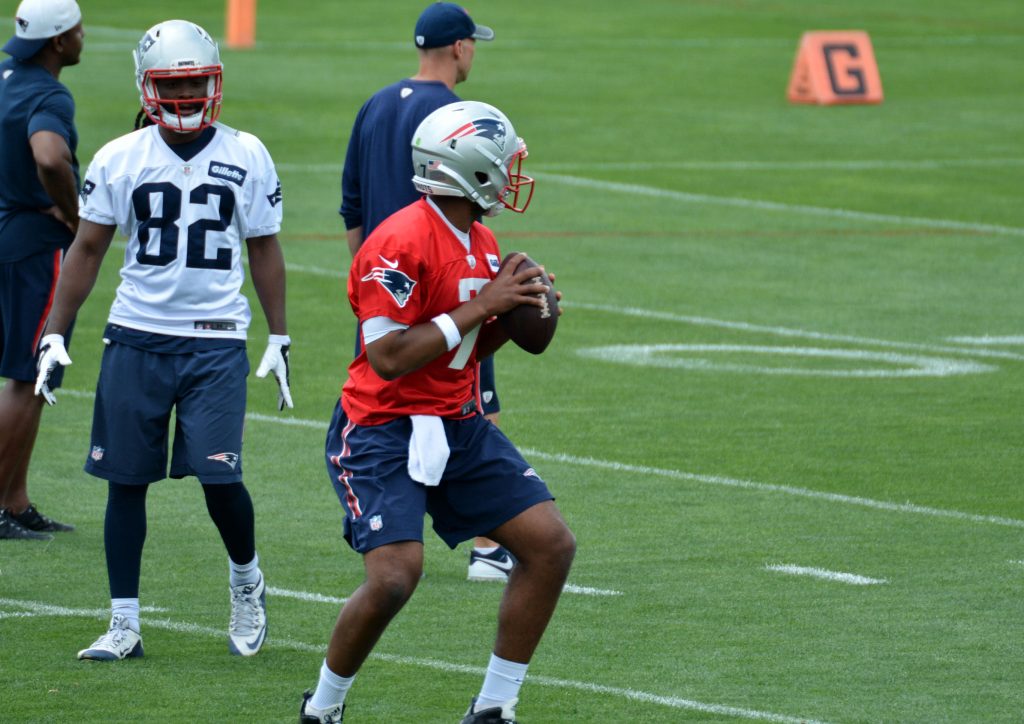 Brissette drops back to pass

Many fans were openly wondering if this means that Jimmy G. is gone after the 2016 season. Not so fast. Much will depend on Garappolo’s play if he does  play during the first four games. If Garoppolo plays and performs well, he could be traded to a QB needy team. But with Brady at age 39, the Patriots may be inclined to keep him for when the day finally comes that Brady retires.

Ed Reed’s Son a Patriots Fan:
Here is a bit of strange news this week. New Bills assistant coach Ed Reed who was a long-time member of the Baltimore Ravens had some family opposition in joining Buffalo. His own 8-year old son Henry.

It seems Henry is a Patriots fan. Say What? How could his son root for his dad’s biggest nemesis? Well as Reed says, it’s easy.

“His mom is from Boston, though she’s not a Patriots fan,” Reed said. “His grandmother lives up there, and the kid likes champions, man. What can I say? I grew up in New Orleans, I loved my home [town] team, but I was a San Francisco 49ers fan. I was a Joe Montana fan. So that’s just how it is.

“When you’re a kid and you’re watching sports growing up, who’s winning those championships? You tend to gravitate toward winners. Which is a good thing. It helps you from a work ethic standpoint, who you’re watching. Who wants to follow losers? Just saying.”

Miami Gardens Mayor Worried Dolphins Would Bolt Without Stadium Upgrades:
Things are looking up for the Dolphins as well as the city of Miami. The team will host the Super Bowl in 2020 and the mayor of Miami Gardens is breathing a sigh of relief.

There were underlying tones that unless the state or the county helped pitch in with the upgrades for the Dolphins stadium, that the team may bolt the city. According to Mayor Oliver Gilbert, the threat was real.

Now that the work is nearly complete, the Dolphins have a state-of-the-art facility that cost them nearly half a billion dollars for the renovations. The stadium will boast a 14-acre canopy that reportedly makes the experience much cooler for the fans during the hot weather games. Miami’s heat has always been part of their home field advantage, so there is some give and take.

Jets Still at an Impasse with Fitzy, Wilkerson:
Todd Bowles finally had enough and told the NY media this week, that he’d no longer entertain questions about unsigned QB Ryan Fitzpatrick. The Jets signal caller in 2015 is out there in free agency still and no deal appears imminent. Bowles did say that if…a big if he returns, he will be the team’s starter.

Likewise, the team has no deal on the radar for their best defensive player, Muhammad Wilkerson. Wilkerson, 26, has been franchised ($15.7 million dollars in 2016) and is looking for a long-term deal.

With the recent contract for Philadelphia’s Fletcher Cox, Wilkerson is likely to be looking for similar cash. And he’d be justified. Since 2012, Wilkerson has had more sacks, 33.5 – 22.0, more forced fumbles, 8 – 5, and more batted passes, 14 – 5. Wilkerson has been a durable, productive player and seems to be digging in his heels. Stay tuned.

Bills “Won the Offseason”, Rex Ryan Says:
This didn’t take long. Rex Ryan never one to back away from bombastic quotes came up with another doozy this week.

“I’m excited about this team,” Ryan said. “Obviously, a lot of things have to happen, and we’re a month or so away, but I told our players today to ‘win July.’ We won the offseason. I would challenge any team. I think we’ve won the offseason.”

One thing’s for certain, the Bills with Ryan at the helm will never be boring and he’s putting the heat and the bulls eye squarely on his own shoulders. With rumors that both he and GM Doug Whalley are on the hot seat, he’s embracing the challenge. Training camp practices for the Bills begin on July 30.

By: Mark Morse
Both games are in the books and we have learned about several players we have not seen play.  The practices leading up to the games…
14 mins ago