It’s the start of the work week, and the weekend definitely went by far too fast.  Hope your Monday goes well as we all head back to work, and here’s a quick rundown of this morning’s top stories:

Bledsoe Believes Poor Drafting, Not Carroll, Doomed them During Carroll’s Tenure – It was interesting to look back following comments by Drew Bledsoe on WEEI’s “Enough About Me” with Kirk Minihane this week about former Patriots head coach Pete Carroll, who when he was hired back in 1997, inherited a team that was coming off of a Super Bowl loss to the Packers to replace the departed Bill Parcells.

But poor drafting by then Patriots GM Bobby Grier was something Bledsoe believed really doomed them and prevented those teams from potentially becoming what he felt could have been a dynasty.  He said during the podcast that Carroll was never the problem, and that when he returned to the NFL to coach the Seahawks, the fact he wanted front office control obviously solved a problem that kept him from success here, and having that control in Seattle should obviously speak volumes about what he’s been able to do.

“There were two things that happened,” said Bledsoe about why the Patriots didn’t flourish under Carroll.  “Number one, that next year, especially toward the end of the season, we were plagued with injuries, which all of a sudden we get late in the season and that’s no small thing. That makes things really difficult. I forget the entire list of guys that were hurt, but it was a lot as we got late in the season.”

“But the biggest thing that happened that prevented that team from going on and being somewhat of a dynasty – and I remember saying that at the time because people obviously would ask, “Hey, is this a one time thing, or can you guys go on and really make a run?” – and I remember saying, “Well, it’s going to depend on what we do with these draft picks” – because we got a bunch of draft picks when Parcells left and then Curtis [Martin] left, we had a bunch of draft picks in the first couple rounds for, I think, three years and I remember saying “alright, well, if we use those wisely, then we’ve got a chance”, because if you’re drafting, it’s even more important now than it was then. But if you draft well, then you have depth and you have replacement guys that can replace guys that get priced out of the market and so on.”

“Of those, I think there were seven draft picks in the first two rounds, I think Robert Edwards was the only one that ended up playing a significant role, and then he got hurt. So those draft picks really didn’t pan out and I think that that, more than anything, kept that team from just rolling forward. That’s why when Pete went to Seattle, he made sure that he had front office control so that he didn’t allow that situation to repeat himself.”

What Bledsoe said certainly holds some credence.  Here’s a look at each draft during Carroll’s tenure:

Bledsoe had a point, as aside from Edwards being selected in 1998, it wasn’t until 1999 when the team drafted Woody, Katzenmoyer and Faulk that they added some guys who could make an impact as those three players certainly seemed promising.  Katzenmoyer, prior to his neck injury, flashed and played relatively well in his rookie season before suffering the injury in his first year that later ended his career, while Woody was one of the Patriots best offensive linemen and Faulk had some good moments before flourishing later on.  Prior to that, it was really just Edwards who had appeared to be their best selection, after he rushed for 1,115 yards for the Patriots in his rookie season, before blowing out his knee in a freak accident during the Pro Bowl in a rookie flag football game that nearly led to him having his leg amputated below the knee and never played for New England again.  Aside from that, Carroll tried to convert Jones to a cornerback and that experiment failed miserably, although Jones had some success under Belichick as a safety.

So that was a surprising number of picks to blow through and after finishing 8-8 in 1999, Carroll was out and Belichick came in and cleaned up the mess, although Grier stayed on until the 2000 draft after Belichick was hired at the end of January in 2000.

It wasn’t the best draft by the Patriots, but 2000 added Super Bowl contributors in tackle Greg Robinson-Randall, running backs J.R. Redmond and Patrick Pass, as well as obviously Tom Brady.  The latter of which obviously changed everything, and he’s been part of an unprecedented run of success after the team won their first championship one season later, and created the dynasty that Bledsoe had obviously had hoped would have happened during his tenure.

You can read more from the interview from Bledsoe in the transcript I put together via this link.

Carroll Still Fears Patriots – Getting back to the topic of Carroll, according to the Boston Herald, the Seahawks coach was asked back in March during the league meetings which NFL quarterback and offense was the most difficult to prepare and defend.

According to the Herald’s Karen Guregian, Carroll admitted that Tom Brady is still someone who likely keeps him up at night.

“There’s nobody harder than Tom Brady because of his efficiency and his knowledge of the game,” said Carroll.  “He’s the most challenging in his style of play.”

Barring injuries, it will likely be an even more difficult match-up when these two teams face each other on November 13th in an 8:30pm Sunday night showdown.  For Carroll, it’s a cross-country battle in what will likely be a pivotal game at the halfway point of the season.  To make matters worse, Carroll’s club will be taking on a Patriots team coming off of a bye week.

This Patriots offense will likely be one of the toughest the Seahawks will face this year and will certainly be one of the marquee games of the season for New England.  For now Carroll certainly knows what he’ll be up against, and hopefully the Patriots will be able to take care of business while having home field advantage when they face off this season. 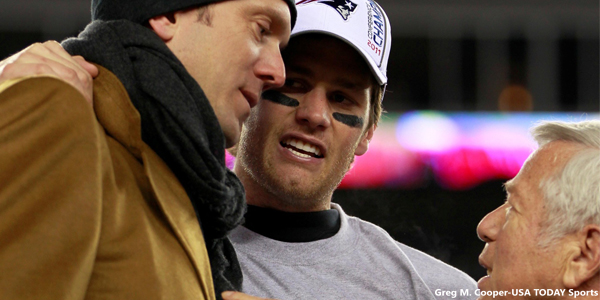 McDaniels Rated one of NFL’s Most Creative Playcallers – ESPN’s Matt Bowen put together a piece for ESPN’s Insider and after taking a look at some of the coordinators throughout the league, it was no surprise that Josh McDaniels made this list.

After all, McDaniels is certainly one of the more innovative minds in the game and watching the Patriots in recent years has been a reminder of how much things have really changed and evolved.  New England has seemingly been ahead of the curve compared to most teams, which largely stems from their ability to adjust based on whatever team they’re playing against in a given week. Watching things since Josh McDaniels returned prior to the 2012 season, it’s become even more intricate in the past couple of years.

Bowen highlights last season’s playoff game against Kansas City as one of the latest examples after New England came out and had Tom Brady fire off 14 straight passes to open the contest, which saw them finish with 302 yards passing after rushing for just 38.

Patriots Come in at #2 For World’s Most Valuable Franchise –  Having one of the most successful franchises in the NFL certainly should add some value to your club and in the case of Robert Kraft, he’s certainly among the tops when it comes to the world’s most valuable franchises.

According to Forbes.com, the Patriots recently came in at #2 behind the Dallas Cowboys among the World’s most valuable sports franchises.  The magazine reports that the Patriots made $195 million last year, behind the Cowboys who came in at a ridiculous $270 million.  From there it was two international teams (Manchester United at $190 million, and Real Madrid at $162 million), followed by the Lakers at $133 million.

Those numbers are before interest, taxes, depreciation, amortization and player transfers across the biggest leagues.

League Bringing Past Big Games to YouTube.com – The league announced on Friday that they renewed their strategic partnership with the popular video site, and it sounds like there should be some exciting videos coming in the near future.

According to the release, the league announced that they’re planning on adding additional content, including three of the greatest games in the history of each of the league’s 32 clubs.  They’ll be adding them prior to the 2016 season, and will be available on the league’s official channel at YouTube.com/NFL.

The release also stated that additionally, more NFL content, including game highlights uploaded to YouTube while games are in progress, will be available through Google Search.  Fans should be able to do a simple Google search for an NFL team and the results will display official NFL video along with related news and information all delivered to the user in one distinct box at the top of the search results. Kickoff time and broadcast information for every NFL game will also be prominently displayed in Google Search.

“YouTube has always been the home for sports highlights on the internet, and we look forward to giving football fans around the globe access to even more of the content they love,” said Jonathan Zepp, head of North America Direct Content Partnerships, YouTube.

No word yet on which games will be selected for the Patriots, but it’s definitely something to keep an eye on as there have obviously been some great contests during the course of this franchise’s history, so it should be interesting to see which three they settle on.

Eastern Illinois Success Gives a Boost to Recruiting – After seeing players like Jimmy Garoppolo and Kamu Grugier-Hill get selected by a team like the Patriots in recent years, that type of success and opportunity apparently has looked attractive to incoming prospects.

According to Mike Reiss, head coach Kim Dameron admitted that the recent draftees have given a boost to recruiting, as obviously it means that the program is one that NFL coaches take note of during the draft process.

“It’s obviously big for our school with recruiting,” head coach Kim Dameron said. “When we go out and recruit, we start with [alums] like Mike Shanahan, Sean Payton, Brad Childress, Tony Romo and Jimmy Garoppolo. Now there’s Kamu. There’s a lot of history here, guys who have gone on and done well in the league. That means a lot to the school and community.”

This year’s draft pick in Grugier-Hill made him the 15th player in program history to be drafted. Hopefully he’ll experience some success in New England’s defense this season, which will likely further bring more attention to that University.

READ NEXT:
For the Patriots WRs, Opportunity Knocks With Edelman Out
Posted Under: Uncategorized