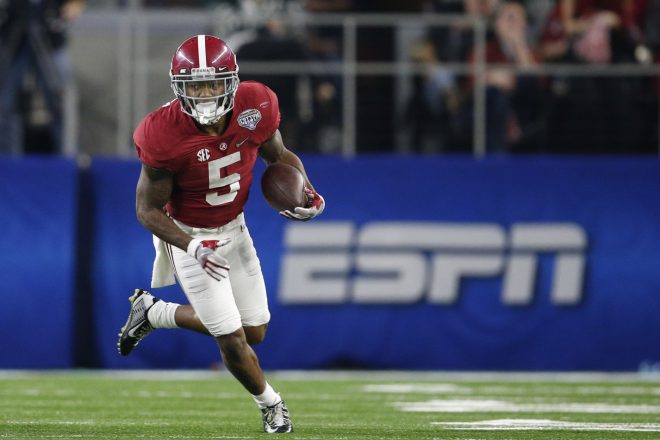 The second day of the 2016 NFL Draft came and went Friday, with the Patriots making their first selections of the event. Here are five thoughts on the day two draft drama. —

1) Typical Patriots Draft: What else did you expect? The Patriots took a player from an elite college program, traded back to collect a pick in a round they were not scheduled to select, picked up a versatile offensive lineman and drafted a QB that has a Charlie Weis and Bill Parcells connection. Shocking, I know.

It’s also no surprise it drew a mixed reaction from Patriots Nation. It’s a cliché, and a damn sure frustrating one, but the phrase in “Bill We Trust” is never more important than on draft weekend. He’s not always right or exempt from criticism, but Bill Belichick’s resume gives him some wiggle room.

2) Cyrus Jones was a Marked Man: They say it’s impossible to predict what Belichick will do on draft weekend, but that wasn’t the case with the team’s first selection on Friday night. Alabama cornerback Cyrus Jones has been under a microscope by us at Patsfans.com and fellow media members in the Boston market for months.

Jones is a solid player that projects as a nickel cornerback in the NFL. He’s tough, competitive, smart, a willing tackler and offers special teams ability. Add to the fact he comes from college football’s most prestigious program under friend of Belichick, Nick Saban, and this was an easy selection to prognosticate.

3) Pats Get Versatile Offensive Lineman: Joe Thuney is a smart, versatile offensive lineman from N.C. State. He’s spent time at every position along the line during college and has tremendous upside. Versatility and intellect in a lineman will always push you up a Patriots draft board.

While the prospect is a good one, the position is questionable. I felt all along New England needed to come out of this draft with their right tackle of the future. Even though Thuney is listed as a tackle, he projects more as a guard. With Bryan Stork, David Andrews, Shaq Mason, Tre Jackson, Josh Kline and Jonathan Cooper already on the roster, if Thuney cannot play tackle then this seems like a bad pick. Time will tell.

4) Quarterback Adressed Early: It’s never bad business to develop QBs in the NFL. In fact, I don’t think teams do it enough. With Tom Brady’s four-game suspension looming, the Patriots needed to add another signal-caller to back-up Jimmy Garoppolo. Now, they’ll be carrying three quarterbacks on the roster for the first time since 2011.

New England selected N.C. State’s Jacoby Brissett in the third round. A big framed player with an NFL caliber arm and upside if given time to develop. He’s a smart, high-character player with mobility to evade pressure and has experience in a pro-style offense.

The question(s) surround the pick is when he was selected and the other holes that must be addressed. The team still needs help at running back, defensive line and linebacker. With Brissett projected as a later round selection, it would have been a more likable move if it were a little later in the process. Then again, it’s comforting, to some degree, knowing they targeted a player and weren’t afraid to take him early.

5) What’s Next?: The Patriots still have plenty of work to do. The team must address the running back position, depth at linebacker behind Dont’a Hightower and Jamie Collins, as well as others. As the roster sits at 80, 10 shy of the league limit, New England has eight selections on day three. There will be moves made, perhaps into the 2017 draft when the team only holds five picks.