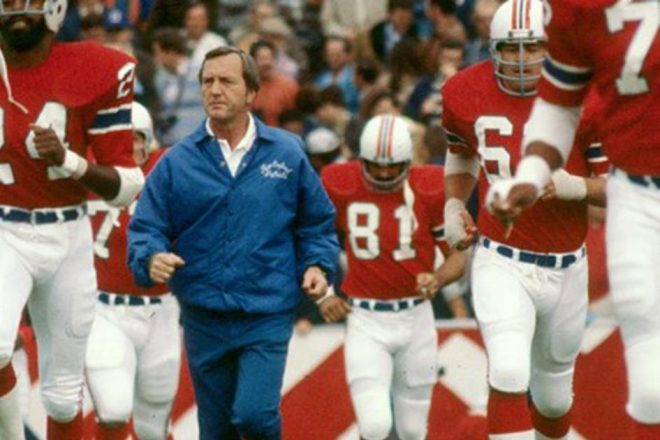 Fairbanks built strong Patriots teams thru the Draft and is Worthy

The Nomination Committee for the Patriots Hall of Fame will meet on Wednesday and begin deliberations for the final three names for the fans to vote on for the next member of the Hall.

With the early 2000’s Super Bowl teams’ members now retired and eligible, there will be plenty of names to pick thru and all of them are deserving. This piece is being written because while most of the fans who will vote are too young to remember anything but success, the Patriots had some very dark years and those of us who lived thru them know and appreciate the teams of today.

But there was a brief lull in the doldrums of the mid-to-late 60’s and before the Super Bowl team of 1985 and that was during the tenure of Chuck Fairbanks. Fairbanks was lured away from Oklahoma where the Sooners had become a national power under his watch to take over the worst team in football. While at Norman, Fairbanks’ teams were 52-15-1 and had a couple of powerhouse teams that won back-to-back Sugar Bowls in 1971-72 before leaving for Foxboro. He coached Heisman Trophy winner Steve Owens during his tenure.

Changes Coming in New England: The first thing he did was fix a Patriots draft system that was pretty much broken at that time. In his first draft Fairbanks landed HOF OL John Hannah, RB Sam Cunningham, WR Darryl Stingley as well as NT ‘Sugar Bear’ Ray Hamilton. A year later he brought in LB Steve Nelson, RB Andy Johnson and LB Sam Hunt. The core of his teams in New England was being put together. Russ Francis and Steve Grogan joined the team in 1975.

His first season 1973, the Patriots were still playing with a majority of players from the old regime that had gone 22-61-1 in the previous six seasons. Fairbanks’ team started slowly at 2-7 before finishing in third place with a 5-9 record. But the culture was changing and Fairbanks was building a solid team.

He changed the Patriots defense to a 3-4 that was still used by Bill Belichick in his Super Bowl winning years. In an interview with Steve Nelson a few years ago, he said that the calls for that Fairbanks 3-4 defense were still relevant to what the Patriots were doing in the early 2000s.

The 1974 season started off with the Patriots on fire leaping out to a 6-1 record before a rash of injuries decimated the team. The highlight of that season found the Pats on the road at 5-1 facing a 5-1 Vikings team.

Fran Tarkenton scrambled for a late touchdown giving the Vikings the lead. He then tripped over a television cable, thinking he was tripped by Pats CB Ron Bolton. Tarkenton turned and fired the ball into the face of Bolton igniting a brawl. But Jim Plunkett led the Patriots to a game-winning drive, connecting with TE Bob Windsor who broke numerous tackles getting into the end zone. Windsor blew out his knee on the game winning play setting the tone for the rest of the season.

Fairbanks team limped to a 1-6 finish to end the season 7-7, their highest win total since the 1966 season. The following year injuries and poor play rocked the team and they fell back to 3-11 season. But that wasn’t to last. The ’76 draft added Pete Brock, Mike Haynes, Tim Fox and Ike Forte.

Running Juggernaut: Plunkett was replaced at QB by Grogan, Fairbanks installed a punishing running game that average 210 yards per game and 5.0 yards per rush. The Patriots offense was the 2nd highest scoring team in the league averaging 27 points per game. In back-to-back games they beat Pittsburgh on the road, then annihilated the Raiders 48-17 in Foxboro. The team was now one of the AFC’s best.

For the divisional round of the playoffs, the 11-3 Patriots had to go on the road against the 13-1 Raiders. This was the infamous ‘Ben Dreith’ game. There was (among others), the phantom ‘roughing the passer’ penalty on Ray Hamilton that wouldn’t even be a penalty in today’s NFL never mind 1976, which set the Raiders up for a winning Kenny Stabler touchdown.

That Patriots team was primed to win the Super Bowl. The Steelers were badly beat up and a shell of themselves where Oakland dispatched them easily enroute to a SB win over Minnesota. Oakland rushed for 266 yards in that SB without nearly the running game New England had that season.

Ownership Breaks with the Coach: The Patriots were no longer a joke of a franchise without a permanent home and a losing attitude. The 1977 draft saw Fairbanks bring in Raymond Clayborn, Stanley Morgan, Horace Ivory and Don Hasselback. Fairbanks was building a winner and instead of embracing his ways, the ownership cut him off at the knees.

Fairbanks promised John Hannah and Leon Gray new deals in 1977 as they were the anchors of the offensive line that keyed the running game. But the Sullivans nixed the deals. For Fairbanks, it was an omen that this relationship wasn’t going to end well.

The 1978 Patriots once again were one of the top teams in the AFC. They rushed 3165 yards and 30 TDs which is still an NFL record and averaged 4.7 yards per rush. They were the 4th team in scoring in the NFL with 358 points and the 1st in yards with 5965. It was arguably their best team, and yet the relationship between Fairbanks and ownership was hopelessly fractured.

After starting 11-4, Fairbanks accepted the Head Coaching job at Colorado. Billy Sullivan fired him and Ron Erhardt coached the team in the season finale, a loss to Miami. Then Sullivan brought Fairbanks back for the playoffs, with a home game against the Houston Oilers. Any chance the Patriots had at going deep in the playoffs was gone. They came out flat and uninspired and Earl Campbell ran roughshod over them enroute to a 31-14 thumping in the franchise’s first home playoff game.

Fairbank’s career with New England was over way too quickly, a mistake on the part of ownership to trust in his system that was working, especially with his drafting.

After he left New England, he coached at Colorado for three years, did one season as the Coach/GM of the New Jersey Generals and was fired by Donald Trump. He then retired to Texas where he occasionally was the guest of then Cowboy’s coach Bill Parcells as a consultant with the draft and during training camp. He died of cancer in 2013.

The chances of Fairbanks getting one of the three slots by the nomination committee are slim. The Super Bowl teams from the 2000s beckon and the voters, the fans, most of whom weren’t even born during that era will give zero chance of Fairbanks being selected. They should.