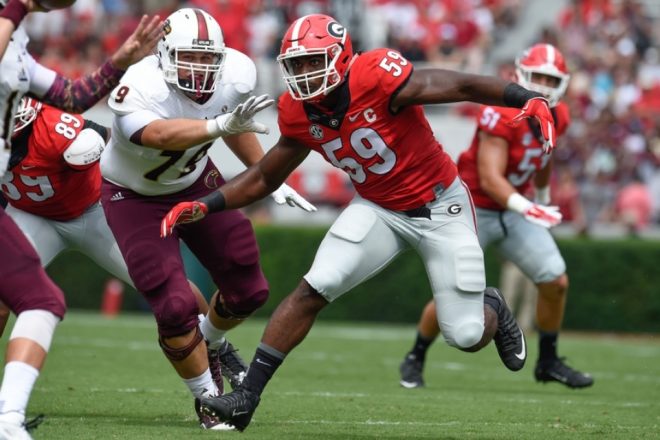 The Patriots have a pair of outstanding linebackers in Dont’a Hightower and Jamie Collins. They also picked up Shea McClellin from the Bears this spring. Mclellin, Jon Bostic, Jonathan Freeny, Eric Martin, Rufus Johnson, James Vaughters and Kevin Snyder will be looking to round out the LB roster for the team this season.

The team will still be looking to add some younger depth thru the draft in a few weeks. With Jerod Mayo retired, the team will miss his leadership both on and off the field. The Patriots like their linebackers on the bigger side and versatile. And there are plenty of them to pick from. Looking at the middle rounds is probably where the Patriots will look to select an additional linebacker.

Jordan Jenkins from Georgia is a player that fits the bill of what Bill Belichick and Matt Patricia look for in an outside linebacker. He’s got good size at 6’3, 257 pounds with almost freakish long arms (34 ¼). For a big guy he ran fairly well at the NFL Combine and he’s a strong, powerful player who can set the edge in the running game and hold up well.

A three-year starter for the Bulldogs, he was dinged up with a couple of different injuries as a senior but still logged 59 tackles, 10.5 for a loss, and four sacks. He’s versatile and has played both outside linebacker positions as well as with his hand in the dirt.

He was a team captain; something Belichick loves in his players and brings his lunch pail to work every day. He has a very high football I.Q. and isn’t lost when asked to drop into coverage. He has outstanding awareness on the field and plays with a physical, hard edge. 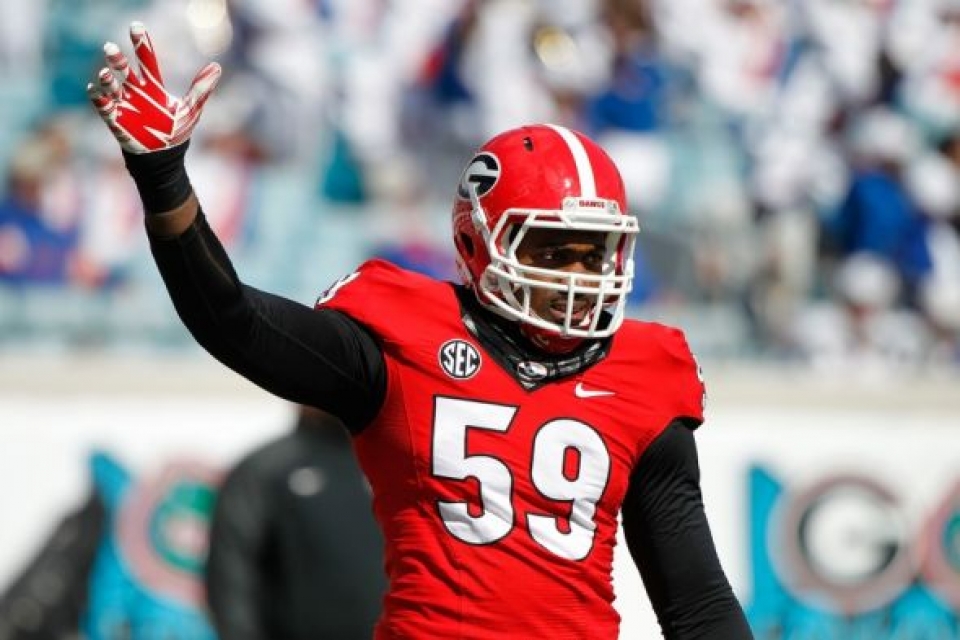 – Good size for the position

– Can set the edge in the running game

– Still emerging as a pass rusher

– He is a bit stiff changing direction, coverage will be something to work on

What his Role Will Be:
His role will be competing for one of the outside linebacker roles. His best fit would be as a SAM or strong-side linebacker lined up over the tight end. He will set the edge in the running game.

Will his Role Change from Year 1-2?
Yes, with an added year under his belt and learning some better pass rush moves, he could push for more reps and possibly as a starter in the base defense.

What Current Player on the Roster Will He Replace?
His roster slot would be in competition with guys like Martin, Johnson and Snyder.

What is his ST Value?
Good, he would find himself on some of the coverage units.

Conclusion:
Jenkins has some explosion or as he says about himself “I got some hops in me.” He had a vertical of 38 inches, so he wasn’t wrong.  Playing mostly in a 3-4 defense that the Bulldogs utilized, Jenkins could just as easily line up as a 4-3 outside linebacker or as a sub-rusher defensive end with the Patriots. Utilizing mainly a bull rush due to his long arms and strong hands, he could use a little bit more bend in the ankle and knees when trying to turn the corner. With some additional coaching, his pass rush skills should improve.

He’s bigger than many of the edge players in the draft and has very good initial quickness, good athleticism, and a tough, hard-nosed attitude. He has good awareness and play recognition and will react quickly and fly to the ball. He has a non-stop motor and always gives 100 percent.

He projects in the Patriots system to be a Potential Starter on Day 1. He should fit in well into the NE defense. Jenkins is currently slotted on most draft boards to be drafted in the 3rd or the 4th round. If he is available then, he could be of interest to the Patriots.