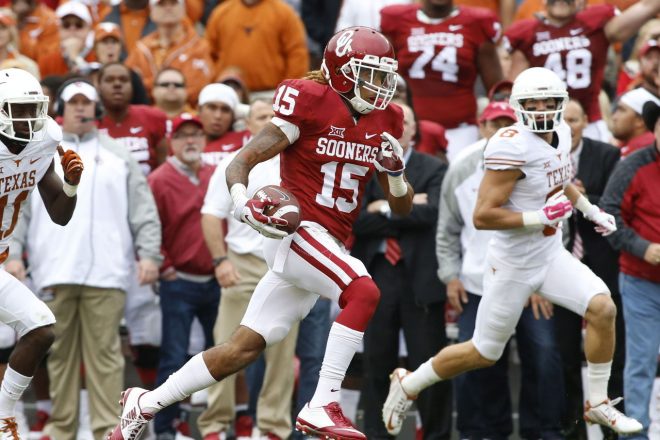 The Patriots are faced with the 2016 season and still needing more depth at the cornerback position. Malcolm Butler and Logan Ryan return as does Justin Coleman and last season’s injured rookie Darryl Roberts. Don’t go to sleep on Roberts who turned some heads in training camp and started the first preseason game but was injured in that and ended up on IR.

He and Coleman are still unproven at this point and with Tarell Brown now a free agent, the team needs to add some new blood. The team brought in free agent E.J. Biggers from the Eagles on Tuesday and he provides depth and versatility as he can play outside or in the slot. He has experience and very good speed. He’s far from a roster lock however so expect the Patriots to look in the draft for more depth.

Zach Sanchez from Oklahoma is an undersized but very productive cornerback that would fit in with the Patriots man coverage scheme. A three-year starter for the Sooners since his red-shirt freshman season in 2013, he decided to forego his final season in Norman to enter the NFL Draft. He started 37 games in his college career.

Extremely productive, Sanchez displays very good ball-hawking skills and had 15 interceptions as well as 28 passes defensed in his time with the Sooners. In 2015, despite missing two games with a leg injury he posted 45 tackles, 3.5 for a loss, seven interceptions and seven more passes defensed. Garnered 2nd team All-America kudos from several media outlets.

He’s very good at reading the quarterback’s eyes and breaking on the ball to either pick off or break up the play. He has good footwork and a football I.Q. where he can recognize routes and adjust accordingly. He has experience in press man coverage, off-man and zone. Has good long speed (4.48 in the 40 at his Pro Day), and can run with receivers on deep routes.

Sanchez is slightly built, at 5’11, 185 pounds and may not hold up against the run in the NFL and may be best suited for the slot. His aggressiveness, which is a big reason for his production, also can be used against him. He’s been susceptible to double moves and SLUGGO (Slant and go) routes.

– Excellent body control, can adjust to the ball in the air and make plays

– Slight frame may make it difficult to hold up outside, looks to be a slot guy

– Aggressive style of play can be used against him

– Needs to add some bulk at the NFL level

What his Role Will Be:
His role will be competing for the third or slot cornerback position. His frame is too slight to hold up in the running game at the NFL level and bigger more physical wide receivers may be able to overpower him.

Will his Role Change from Year 1-2?
Possibly, if he bulks up a bit and reacts well to coaching, they can temper his at times, over-aggressiveness and he could challenge for starting reps.

What Current Player on the Roster Will He Replace?
His roster slot would be in direct competition with Coleman, Roberts, Biggers and Melvin.

What is his ST Value?
Good, he’ll play on coverage units

Conclusion:
Sanchez is an undersized by very productive cornerback. Like many smaller players, he’s scrappy and aggressive with a nose for the football and making plays at critical times in the game.

Although he did play some press coverage, much of Oklahoma’s schemes were in either Cover 2 or Cover 3 where he played more off the line. This is where he showed his vision on the field where he made it a habit of reading the QB’s eyes and making plays on the ball.

He can be over-aggressive, something coaching will have to work on, but playmakers make plays and he’s shown that he’s quite capable of doing that. He’s best served in the slot if the Patriots draft him where his aggressiveness would be best served.

He projects in the Patriots system to be a Potential Starter on Day 1. He should fit in very well into the NE defense. He’s projected to be available in Rounds 3-4 of the draft. If he’s there, then the team could have some interest in picking him up and his value is best served there.