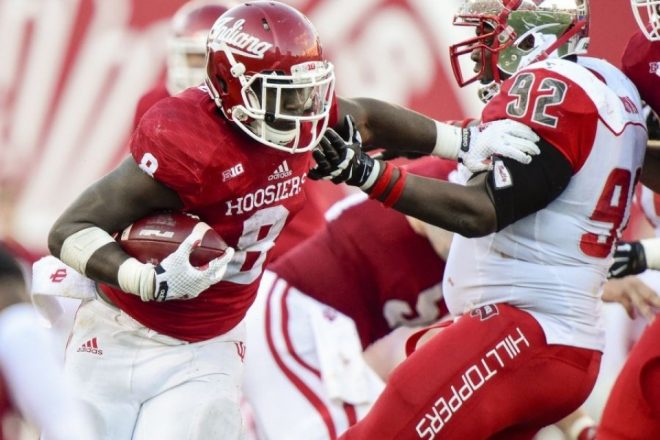 The Patriots may still need to target a running back in the 2016 NFL Draft. Even though they have signed former Colt and Charger Donald Brown, they don’t really have a reliable power runner that can punish defenders and carry the ball between the tackles. Brown has had some degree of success in the passing game, as had Dion Lewis and James White but the Pats need a consistent ground gainer that can take advantage of the New England power blocking scheme.

Brown has never been that productive type of runner that the Patriots need. He’s good for their depth and can spot start, but they need an upgrade. Brandon Bolden is mainly a special teams’ maven and Tyler Gaffney is still looking to get on the field in Year 3.

The Patriots haven’t drafted many running backs in the Belichick era (8 to be exact), but with the apparent need, especially late in the season with the injuries piling up, this may be a time to strike in the draft. With the running game mired in 30th place in the NFL last season, the failure to stay even remotely balanced was a clear-cut case for the team not winning home field advantage for the playoffs and was a big reason they lost the AFC Championship Game in Denver.

Jordan Howard is a perfect candidate for the Patriots to target in the upcoming NFL Draft.  Coming from Indiana, he played one season in the Big Ten, and was granted immediate transfer eligibility after UAB canceled their football program a year ago. And what a season he had, rushing for an average of 134.5 yards per game. In the six games where he got 20 or more touches, his average skyrocketed to 181.5 yards per game, including a tremendous 238 yard effort against Michigan.

He finished his sole season with the Hoosiers with 196 carries for 1213 yards and nine touchdowns. He added 11 catches for 106 yards and a touchdown out of the backfield.

Howard has the proto-typical size of an NFL power back at 6’0, 230 and has a thick, powerful build. He has good vision and will follow his blockers to daylight and has decent lateral agility for a big man. Howard loves contact and likes to lay punishing hits on defenders who try to stand him up. His yards after contact are impressive, will keep his legs moving and will move the pile and the sticks in short yardage.

– North-south who won’t be brought down with arm tackles

– Good lateral movement and vision for a big back

–  Soft hands out of the backfield, underrated in the passing game

– Excellent in short yardage situations, will move the pile and sticks

– Has decent but not breakaway speed

– With his style of play, has injury concerns, missed four games in 2015

– Willing in pass protection but could be more aggressive

What his Role Will Be:
His role in the New England offense would be similar to what LaGarrette Blount’s was the past few years. He is a bell-cow power back that can run between the tackles and keep the chains moving. He will contribute in the passing game only a little at first. Is a decent pass blocker, but could improve in that area.

Will his Role Change from Year 1-2?
Yes, with more work on his receiving skills he could become a bigger target in the passing game

How Many Downs Can He Play?
Two with the possibility of three in time

What Current Player on the Roster Will He Replace?
Free agent LaGarrette Blount

Conclusion:
Howard is a younger version of Blount and would be nice fit in the Patriots system. He is exactly what they need, a big, physical back who can run between the tackles and get the tough yards but more importantly, get the yards when the opponent knows NE is going to run. He can be a closer with the Patriots late in games when they need to run the ball and kill the clock.

Only 21 years old, Howard is still a young man with little mileage on his tires. He skipped his senior season to enter the draft and answered any questions about his ability to play against top competition with a very impressive season with Indiana.

His punishing running style will invariably lead to injury concerns and he missed four games last season. He’ll have to learn when to lower his head for more yardage and when it is a good time to run out of bounds.

He projects in the Patriots system to be a Starter on Day 1. He should fit in seamlessly into the NE offense

Howard’s highlight film can be found here, courtesy of Illinoisaaron: