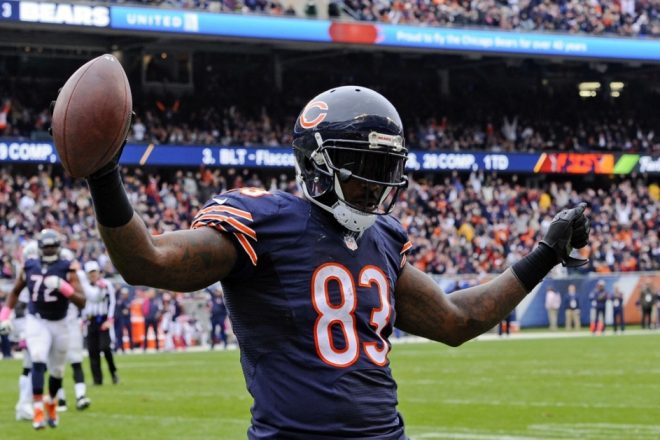 Every year people complain about how free agency starts off for the Patriots, but Wednesday was yet another big day as New England added a great piece to their offense after consummating a big trade with the Bears while adding yet another on defense.

Patriots acquire TE Bennett – Adam Schefter of ESPN reported that the Patriots pulled off a trade with the Bears Wednesday night, acquiring a player who may give Tom Brady and the offense a dangerous weapon opposite Rob Gronkowski this season.  According to Schefter, the Patriots completed a trade with the Bears for tight end Martellus Bennett, and it didn’t cost them much.  New England was able to get Bennett for very little, reportedly giving up just a fourth-round pick, while also receiving a sixth-round pick in the deal.

It’s a strong acquisition, giving the Patriots another 6’6″ 273-pound target for Brady to attack opposing defenses with and for Bennett, it’s an opportunity to shine in an offense that will likely allow him some terrific match-up advantages given who he’s lining up with.  He’s already been a productive player, with ESPN pointing out that Bennett is second in the NFL among TE’s since 2013 to just Gronkowski in terms of most yards after catch (Gronkowski has 1208, while Bennett has 1066).  With the addition of wide receiver Chris Hogan, the Patriots have definitely gotten stronger offensively, with Gronkowski, Bennett, Julian Edelman, Hogan, and Danny Amendola now rounding out a solid group who will hit the field this season.

The reason Chicago dealt Bennett was primarily because he had become a malcontent in the locker room due to reported disagreements with the coaching staff that seemingly peaked in a practice just before their Thanksgiving game against the Packers, which left him home after he didn’t travel with the team.  The team listed him with a rib injury, but there were reportedly private complaints from his teammates.  He ended up finishing the season on injured reserve.

Some may wonder if those troubles will follow him to New England, but this isn’t the first time the Patriots have been down that road.  The list of players who were unhappy with their past teams and became productive are numerous, from Corey Dillon, Randy Moss, and LeGarrette Blount, just to name a few.  The culture in the locker room is well-established and players who have come and gone have mentioned repeatedly how different things are.  So Bennett now finds himself in a situation where he could shine in a winning program, and it should be exciting to see how he fits in.

McClellin, who is a former first round pick (19th overall) back in 2012, started 31 games in four seasons in Chicago and was moved around quite a bit playing both inside and outside, giving Bill Belichick another player on defense with versatility.  He was a productive player last season, finishing 2015 second on the team in tackles for Chicago with 81, along with two tackles for a loss and a forced fumble with a recovery.

However, it will be interesting to see how he’s used.  Back in January McClellin expressed a desire to stay at inside linebacker, which is a position he ended up at after spending his first four years in the league playing defensive end and outside linebacker.

“It’s been a tough four years moving around positions,” McClellin told the Chicago Sun Times.  “It’d be nice to stay at one.”

He played in 12 games in 2015 for Chicago with 11 starts, and played at inside linebacker in his first year at the position.

“I don’t want to move positions again,” he said. “I feel like that’s the right fit.”

Now he joins one of the best defensive minds in football with Belichick and Matt Patricia, who players have been vocal about the fact they’re always put in a position to succeed in this defense.  Given their needs inside following the retirement of Jerod Mayo, he should fit in quite well in this defense.

Patriots Sign RB Brown – The Patriots added yet another former first round pick on Wednesday, signing Chargers running back Donald Brown after the two sides reportedly reached an agreement on a one-year deal.  The former standout from the University of Connecticut was selected with the 27th overall pick by the Colts back in 2009 but so far he hasn’t quite lived up to his potential.  Brown’s most productive season per-carry was back in 2013 after he rushed for 537 yards on 102 carries, averaging 5.3 yards per carry as well as scoring 6 touchdowns.  He signed with the Chargers in 2014 and his last two years dropped off dramatically, leading to his two lowest career season totals after rushing for just 223 and 229 yards respectively and just one total touchdown.

But he has an opportunity now to turn things around and it’s a no-risk signing for New England.  According to Peter Schrager of FoxSports, the 28-year old Brown took short money after signing a one-year deal with just $250,000 in guarantees, and now adds depth to a position that will likely still be upgraded before training camp starts.

No Negotiations Underway Yet With Butler, Collins, or Hightower – Jeff Howe of the Boston Herald reported on Wednesday that so far negotiations haven’t started with the Patriots’ three key players on defense in Dont’a Hightower, Jamie Collins, or Malcolm Butler, each of whom are in the final year of their original contracts.  Hightower and Collins are considered to be the two priorities, as the team has a little more flexibility with Butler due to the fact he’ll be a restricted free agency after this season.  Clearly he should be a priority given the performance he put in last season, but the bigger question will likely be whether or not he’s willing to accept a team-friendly deal in order to ensure the Patriots will be able to keep each of these critical pieces in the fold for the long-term.

The same can be said for both Collins and Hightower, who have been one of the top tandems in the NFL and each is deserving for a big payday.  The Patriots seem to be positioning themselves to start working on getting something done to make sure they stay here, but both would likely receive significantly more on the open market, so it will take both sides to want to get a deal done.

Butler is quickly beginning to establish himself as among the best corners in the game, finishing with a team leading 15 passes defensed in 2015, tying him with Janoris Jenkins (Rams) and Robert Alford (Falcons) for 10th most in the NFL.  In the open market he’s likely another player who could get more money, but he seems like a player who is happy where he is and appreciative of the opportunities he’s been given.

Obviously that only goes so far, and Butler told the Herald he’s not worried about that right now.

Jones Already Looking Forward to Facing His Old Team – Chandler Jones is settling in with his new team in Arizona, who will face the Patriots this season.  Jones admitted during his news conference that he’s already eyeing that game.

“(That) might be a game I could circle with my red marker,” Jones told reporters via WEEI on Wednesday.

Jones will be the one with home-field advantage with his new team when he lines up and starts trying to make his former teammate, quarterback Tom Brady, uncomfortable.  Arizona is one of the away teams on the Patriots in 2016, with the date currently not known as the schedule for this season has not yet been released.

SOCIAL POST OF THE DAY:
Bennett Ready to get to work with Tom Brady: