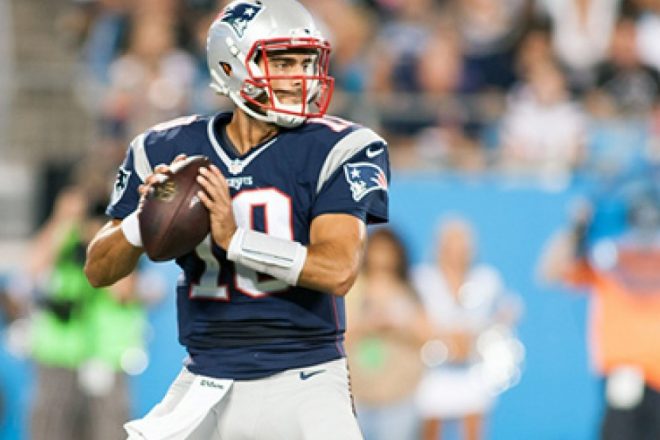 Here’s a new daily column that will give you a quick rundown each day to help keep you up to date with the latest Patriots news and other related links, along with commentary to help get your day started.  It’s a work in progress and will run Monday through Saturday, so check back each day while we try and make it a productive part of your daily routine.

It’s Monday, which means it’s back to work for the vast majority of us.  So we’ll make this relatively quick so that you can grab your coffee and your keys and get to it.

The talk of trading Jimmy Garoppolo has been broached by several writers recently and while it’s an interesting topic, until the battle against the league is ultimately put to bed between Tom Brady and the NFL, it’s just too risky of a move.

It’s no secret that without a first round pick, the Patriots need to address the issue of making sure they don’t go without this year’s Malcom Brown, who was last year’s first-round pick and turned into a key component of New England’s defense.  While it’s easy to assume they’ll be fine, losing the ability to acquire a potential impact player is still significant, especially after seeing a player picked as late as Brown come up big in 2015. The logical choice would be to move Garoppolo in hopes of finding a team desperate enough to give up a high second-round pick, which would essentially bring similar value considering how late in the first round New England was going to pick anyway.

However, the only problem is, as Jeff Howe of the Boston Herald pointed out on Sunday, if they trade Garoppolo and Roger Goodell gets his way and manages to get Brady’s suspension reinstated, that sets up a disaster scenario where the Patriots would be without a quarterback with any experience in their system through the first four weeks of 2016.  As a result, for that reason alone, it would be tough to imagine New England making such a risky move until this ridiculous saga is finally put to bed.

Neither Goodell nor Brady will be in court this week, and the bad news is this is expected to be another lengthy process, which likely won’t allow any type of resolution to be reached even close to the time the draft gets here.  As it stands right now, when the two sides meet in New York this week, each party will make their oral arguments, which will then include questions by the three judges during the league’s appeal in New York.  From there, it will likely take several months before we find out what direction this will take.

Moving a player like Chandler Jones could be a possibility, but there are still issues to be addressed in free agency before we find out what personnel decisions they’ll make. Fortunately, following Peter King’s article last week and several others, including Steph Stradley’s well-reasoned take on the topic, the drum has started to begin beating for New England to get their picks back, albeit that still seems like a longshot.  With the team updating their Wells Report in Context website, clearly they still feel strongly about the subject but it’s hard to imagine Goodell backtracking given what he stands to lose.

For now, while Brady wasn’t able to enjoy the offseason last year because of it, hopefully despite not being able to repeat as a Super Bowl champion, he’ll at least come away with back-to-back wins in court.

1) Rival execs, experts: Patriots will overcome lost No. 1 pick – Karen Guregian (Boston Herald) – Guregian spoke to several General Managers and analysts about how the Patriots will deal with being without a first round pick.

2) Patriots holding off on contract talks for now – Jeff Howe (Boston Herald) – Citing sources, Howe reports that no contract talks have been held yet with linebackers Dont’a Hightower and Jamie Collins, or defensive end Chandler Jones.  All three have contracts expiring after next season.

4) Plenty of LBs Can Help the Pats – Jeff Howe (Boston Herald) – Howe looks at some potential players the Patriots may want to pay close attention to at at the linebacker position heading into this year’s NFL draft.

5) Patriots facing a Danny Amendola Quandry – Tom Curran (CSNNE) – Curran points out that before the league year begins on March 9 and Amendola’s $5 million salary begins counting against the salary cap, the Patriots will talk to Amendola about whittling the number down.

1) What we learned from Day 3 of NFL Scouting Combine – Chase Goodbread (NFL.com) – Several players didn’t fare too well on Sunday at the Scouting Combine, which will likely cost them some money by the time the draft gets here.

“What I love about the Patriots is they don’t take any B.S.  You need to be able to act well. You can’t be getting in trouble and stuff like that. When I do watch film, I do watch the Patriots, and they have two physical linebackers in the middle. Their defense in general is physical. I wouldn’t mind playing for them at all. They have a great scheme.” –  Missouri LB Kentrell Brothers via the Boston Herald.

By: Russ Goldman
In this episode, Russ Goldman shared his observations from Training Camp as he was there on Wednesday. Derek and Steve discussed there thoughts on Training…
4 days ago