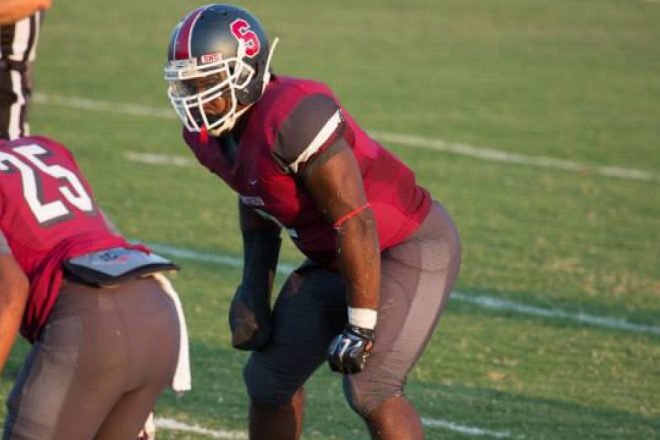 The small Christian Liberal Arts school of Southern Nazarene is 1674 miles away from Foxboro in Bethany, Oklahoma but the middle linebacker for the Crimson Storm plays football like he’s already been residing at One Patriots Place.

Larry Butler III is a name many of you have never heard of since he played for a small Division 2 school and one whose team was just 1-10 in 2015. But in looking for a guy who can play middle or inside linebacker for the Patriots, he’s an impressive young man who is worth a look.

Butler agreed to sit down to talk for an interview with us at PatsFans.com while he’s preparing to hopefully hear his name called in the 2016 NFL Draft. He’s been working out at Champion Fitness and Nutrition in Atlanta, getting ready for his Pro Day, since he was snubbed without an invite to the NFL Combine. But don’t let that sway you, there are plenty of players on the 53-man roster who also have been snubbed… more to that in a bit.

Butler’s final season was a tough one both as a team and personally. He missed two games with an ankle injury and parts of a couple of others. But still managed 75 tackles, a sack and 2 interceptions in 2015. He was named to the All GAC team. In 2014 he had 93 total tackles, including 9.5 tackles for loss (TFL), 2.5 sacks and 3 forced fumbles.

Butler grew up in Baton Rouge, Louisiana and had about 20 offers to go Division 1, including 5 from the SEC. But his grades weren’t there so he entered Junior College. ESPN had him ranked the #1 JUCO linebacker and he was set to enter Tennessee before a snafu emerged. He took one class too many in Junior college, therefore, would only have one year of eligibility remaining for Division 1 and the Vols.

So Butler opted for the small school of Southern Nazarene University outside of Oklahoma City. So why there at Southern Nazarene? That was the first logical question to ask. “I was committed to Tennessee, but due to a technicality, that didn’t happen, but what drew me here (Southern Nazarene) was the Christian environment, the home feeling of the entire university and I felt like that is what I needed in my life. The academic prestige of the university was definitely a factor as well.”

“Tennessee’s loss was Southern Nazarene’s gain,” said his defensive coordinator and interim head coach in 2015 Craig Hubbard. “We felt truly fortunate to get Larry here and he was a big, big part of our program.”

“We mixed things up when I was the DC,” Hubbard said. “We played 4-3, 3-4, Larry fit in well, he’s a very physical, instinctive player. He played off blocks well and he’s a great tackler.”

We asked Butler who is working out in Atlanta, is there a specific area that you’re looking to improve on?

“Not in particular, I feel like you can always get better, but in refining technique, getting quicker, stronger and faster, some mental acumen… studying the mental side of football, coverages and certain things I’ll have to face at the next level.”

A downhill, instinctive linebacker, the 6’1, 248-pound Butler is a thumper in the middle of the field, runs a 4.67 in the 40-yard dash but is a three-down player. He was a member on all four core special teams units as well so he isn’t worried about having to earn his way onto the field via special teams either.

He has a tremendous work ethic and is a true student of the game. One of his strong suits is not only knowing his responsibilities but those of the other members of the defense as well.

“I take pride in knowing everything that’s taking place on the football field, as the middle linebacker, the quarterback of the defense, we HAVE to know where the D-Linemen are lining up, what the backs must do on the back end,” he said.

Hubbard chuckled when we talked about Butler’s work ethic, “Whenever I was looking for Larry, we’d always find him in the film room. There were times, I’d be wanting to lock up shop for the night, no one is left in the building… and he’s in there wanting to watch more film, break down tendencies…he’d always want to meet, and watch film. Larry’s a real go-getter when it came to getting himself prepared for the game and knowing the opponent.”

“He was a heckuva player for us, and if somebody gives Larry a shot, I think he can absolutely be playing in the NFL next year.”

Is there a better fit for Butler in a 3-4 defense or the 4-3 that the Patriots use in their base? “I feel like I’m versatile enough to fit in any scheme, I do like the 3-4 defense with more linebackers on the field, that was something that I got accustomed to in high school. We played a 4-3 here so it wouldn’t make a difference. I feel like I fit in either.”

Is there an NFL player who’s game you feel like you are similar to? “I feel like I am kinda unique,” Butler said. “But a few scouts compared me to a Denzel Perryman.”

We asked him an NFL Combine-type question, ‘if I’m Bill Belichick why would we pick you up as a member of the Patriots?’

“I’d look him right in the eye and say, that would be one of the best decisions you ever made.” Coincidentally, those were nearly the exact words that Tom Brady told Robert Kraft after the 2000 draft.

‘I’m a hungry individual that is looking for a chance, I think I can help the team win, there will never be any off-field issues with me. I’ll be the first one in the film room, weight room and the last one out. I want to achieve greatness and am willing to do whatever it takes to do that.”

With the retirement of Jerod Mayo, the Patriots can use some depth at the linebacker position behind Jamie Collins and Dont’a Hightower, especially inside. Jonathan Freeny and Darius Fleming are primarily outside linebackers. Jon Bostic is on the roster but didn’t play much on defense last season, mainly on special teams.

Butler is a perfect fit for the Belichick mold, a guy that eats, sleeps and lives for football. He can fulfill a role and need for the team and with a late round draft pick or perhaps signing him as an UDFA, he could be the next diamond in the rough for the Patriots.

As for him not being invited to the Combine, some other Patriots players who also weren’t invited include Julian Edelman, Shaq Mason, Sebastian Vollmer, Nate Ebner, Duron Harmon, Tavon Wilson, Malcolm Butler and Darryl Roberts.

Butler possesses the same trait as all of them, a deep desire to improve and the work ethic to see it through. All he’s looking for is a chance. Two seasons ago the Patriots had a Butler from a small Division 2 school come out of nowhere to play a big role for the team when they needed it the most. Perhaps it is time for another Butler from a small Division 2 school to do it again.