7 years ago at 6:43 am ET
Follow @SteveB7SFG
Posted Under: Patriots Commentary 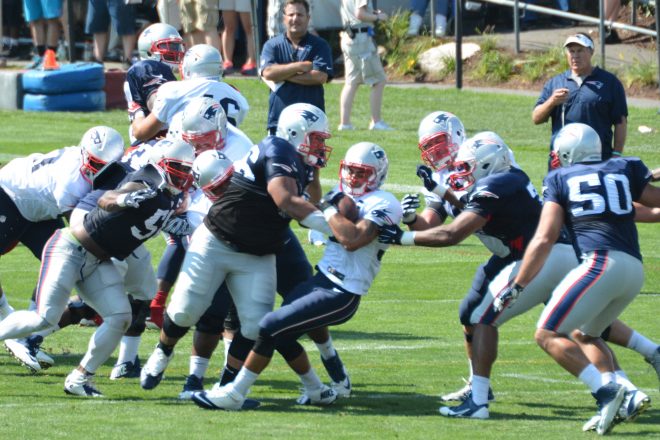 The Patriots are deep at the defensive tackle position; starters last season were rookie Malcom Brown and Alan Branch, the latter who played very well but is entering into the last season on his contract. The rotation consisted of Dominique Easley, Sealver Siliga, Akiem Hicks and Ishmaa’ily Kitchen. The team also has Chris Jones returning as well as Joe Vellano. Easley was the team’s top draft choice in 2014 but has never played a full season due to injuries.

Siliga was signed to the Patriots practice squad back in October 2013 and if re-signed will start his fourth season with the team. With the departure of Vince Wilfork last spring, it was penciled in that he’d take over the starting tackle position while the rookie Brown found his feet in the pro game.

But after starting the first few games, Siliga had a poor outing against the Colts in Week 5, losing containment on several plays. The next week, he lost the starting job to Brown and played only 10 defensive snaps against the Jets, although chipping in with three tackles.

The big 6’2, 325-pound run stuffer is one of two free agents (Hicks), the Patriots have in their interior. He’ll turn 26 in April and still has plenty of tread left on his tires. Now the question is, after losing his starting job and a lot of snaps to the duo of Brown and Branch, will the Patriots bring Siliga back for the 2016 season?

Why Siliga Will Return: Siliga is one of those big bodied guys who are invaluable as run stuffers. One of the indelible moments of training camp was his crunching hit of Tyler Gaffney on August 1, shooting across the gap and leveling the runner as he was trying to get to the second level. That’s his type of play and frankly the type that the Patriots need more of.

With the injury history of both Easley and Jones and Branch’s uncertain future given his age (31) and his contract status, it would certainly bode well for the Patriots to at least bring him back to compete for a slot in training camp. He certainly shouldn’t break the bank and with Hicks possibly commanding a lot of money in free agency, their depth would certainly take a hit if they were to lose both.

At a minimum, if Hicks returns and Easley is healthy, Siliga would provide the big-bodied run stuffing rotation against the run heavy teams that the Patriots will face in 2016.

Why Siliga Won’t Return: The Patriots may see the diminishing returns of Siliga this season as a sign of things to come. If they re-sign Hicks then their rotation with he, Branch, Brown and Easley would be close to being set and Siliga would be relegated to a #5 role.

The big man has also battled some injury concerns as well and that will also have to be taken into consideration.

Bottom Line:  It makes too much sense for the Patriots not to offer Siliga a team-friendly deal and bring him back to compete for playing time during the spring and summer workouts. Training camp snaps will become important as they have potentially a lot of depth to work with.

There shouldn’t be a ton of pursuers coming after Siliga so a bidding war isn’t in the cards. Much of their decision may come down to how their negotiations go with Hicks and monitoring the health of Easley and Jones in the spring. Easley didn’t need surgery on his injured quad so that was a positive sign for the 2nd year player.

Siliga has been a nice part of the team’s rotation up front and given the extent of the injuries the team has suffered the past few years, the chances are 60/40 or better that they’ll bring him back in 2016.