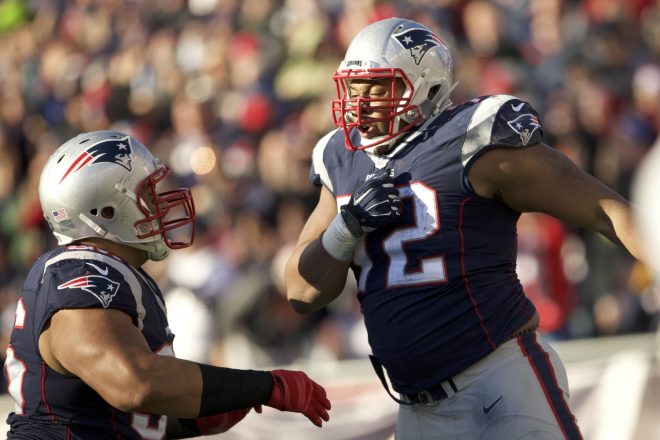 The Patriots defensive line entered the 2015 season with some questions. It was the first time in more than a decade that they’d not have big Vince Wilfork clogging the middle. And with questions about how the rookie 1st round draft pick Malcom Brown would work out, the Patriots ability to stop the run as well as push the pocket from the interior was not as sure as in years past.

The Patriots traded for Akiem Hicks on September 30, sending backup tight end Michael Hoomanawanui to the New Orleans Saints for his services. At the time the trade made little fanfare, but it ended up being a steal for New England. Now at the end of the 2015 season, Hicks is the team’s biggest free agent priority to bring back in 2016.

Hicks was drafted in the 3rd round of the 2012 NFL Draft by the Saints and after three seasons due to a change in philosophy as well as diminishing returns, he was relegated to a backup role in New Orleans. There were some whisperings of his work ethic, which made the trade seem like a bust. But Hicks just needed a fresh start and has been a valued member of the team.

He started slowly as the four-man rotation featuring Malcom Brown, Dominique Easley, Alan Branch and Sealver Siliga was already set. But when Dominique Easley went down with a season ending injury, Hicks stepped in to the third player in the rotation and played very well.

The big 6’4, 325-pound lineman is versatile, a Bill Belichick staple and can play anywhere from 0-technique to a 5-technique. His ability to stop the run and collapse the pocket were big parts of the Patriots defense down the stretch. His role increased as he became more familiar with the Patriots system and given a better defined role once Easley went down.

Playing a 5-technique defensive end in the Big Easy, he played more of a defensive tackle role in New England moving in different spots on the line. He logged 21 tackles, including 15 in the final four games, with three sacks and a fumble recovery for a touchdown in 2015. He uses his big frame and plays with good leverage in the running game but has long arms that he can shed blockers in pass rushing, his specialty.

“I think that my time here has been spent well, focusing on what I need to do to become a better player, in general,” Hicks said just prior to the playoffs beginning. “And then, along with the coaches, keeping me as a part of the defense and pushing me forward.”

And it never hurts to get a little love from the head coach. Bill Belichick was singing his praises to the media earlier this month.

“We change things a little bit fairly regularly, Belichick said. “So there is definitely an element of game planning and things we do specific to one team that don’t necessarily carry over from the week before, so I think that’s an adjustment for a lot of players that come in here. But he’s done a good job, he works hard, he’s certainly improved and gotten a lot better in all those areas.”

Why Hicks Will Return: Versatility, leadership and production. And he’s only 26 years old so he’s just entering his prime. Hicks seems to have found a second lease on his career in New England this season and his signing will align him with Malcom Brown, Dominique Easley, Dont’a Hightower and Jamie Collins to give the team an incredibly young and talented nucleus for the front seven.

The Patriots had their eye on Hicks this season at the joint practices in West Virginia, Belichick said as much back in September when they made the trade for what was their fourth tight end on the depth chart.

They know what they have in Hicks and he was just finding his groove at the end of the season after a slow start. He should only get better in 2016.

Why Hicks Won’t Return: Money. Hicks’ performance may put him in-line for a huge payday that the Patriots may decide that is too rich for their blood. Belichick is a pragmatist when it comes to contracts. He will pay a player what he feels that player is worth and not a penny more.

If another team comes in with an offer for big money, Hicks could be moving on next season. The Patriots won’t be the only team vying for his services as Hicks plays a position that is always paid and paid well in free agency.

Bottom line: Our take is that there is a better than 50/50 chance that Hicks will return to wear the Flying Elvis in 2016. He’s more than shown he’s a fit. And once he got to play regularly, he played and played well. Now that he’s comfortable in the system, he should be even better next season.